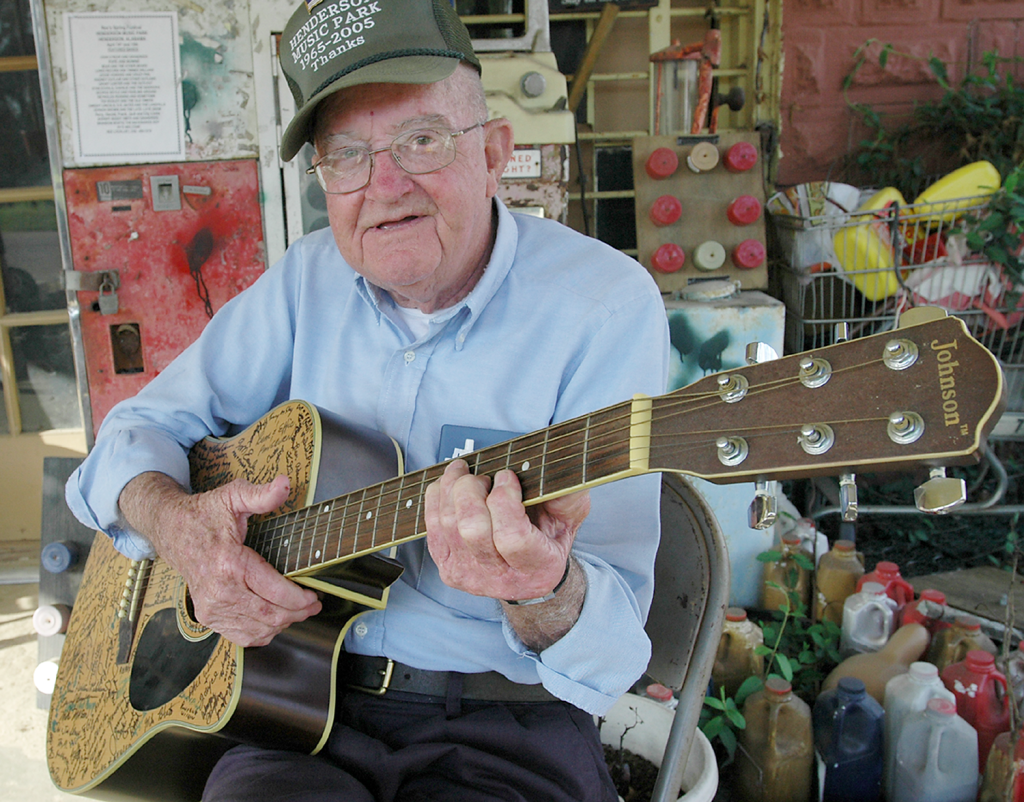 The cliché “It’s all over but the shouting” might be apropo­­s for some things, but not when it concerns Rex Locklar’s acceptance into the Alabama Bluegrass Music Hall of Fame.

A roaring cheer, the likes of which may never have been heard in the quiet community of Henderson, went up and the crowd came to its collective feet in celebration of the announcement that the late Rex Locklar will be inducted into the Alabama Bluegrass Music Hall of Fame on March 3, 2018 in Hoover.

The announcement followed the annual Memorial Service at Ole Rex’s Bluegrass Festival at the Henderson Music Park on Saturday.

“The crowd just went crazy,” said Pete Austin a longtime friend of Rex Locklar. “Everybody was so excited that Rex was going to be honored by being inducted into the Alabama Bluegrass Music Hall of Fame. Not that Rex ever wanted any kind of recognition or fame but just because no one deserves it more. A lot of people were saying that this recognition is long overdue and they wished this could have happened when Ole Rex could have enjoyed it.

However, Austin said Locklar’s joy came from seeing all of his friends come together for the love of bluegrass and of each other.

“Bluegrass is not entertainment; it’s family and nobody knew and understood that better than Rex Locklar,” Austin said. “Ole Rex was happy as anybody could be when his bluegrass family was in Henderson and bluegrass music was being played.”

Locklar’s credentials for nomination to and acceptance into the Alabama Bluegrass Music Hall of Fame include the 49 years he hosted bluegrass festivals in Henderson.

“Not just one festival a year: two – one in the fall and one in the spring,” Austin said. “Not only did Rex host the festivals, he promoted bluegrass music all year long. So many fine bluegrass pickers got started in Henderson and through Rex’s influence. He got a lot of little people in the business.”

The highway between Springhill and Goshen has already been named the Rex Locklar Bluegrass Highway. Now, Locklar has been accepted into the Alabama Bluegrass Music Hall of Fame.

“Rex would be proud, but he wouldn’t make a big thing of either of those honors,” Austin said. “Having the highway named for him and getting that big award would not compare to him knowing that bluegrass is continuing to be played in Henderson. The last words he said to me were ‘keep it going’ and that’s what we’re doing – as a tribute to Ole Rex – as his legacy.”

Wiley Locklar of Troy said his brother was a born musician.

“Our dad, Perry was a fiddler and our mom, Rochelle, was an outstanding singer,” Locklar said. “Rex was born with talent and he loved old-time music. I don’t guess there was ever a time when Rex didn’t love music. He started playing the guitar about the same time he started walking.”

Rex Locklar served in the U.S. Army “with pride” during World War II.

“He arrived at Pearl Harbor just a few days after it was bombed,” Locklar said. “He got up a little band over there and they played more to relieve stress than anything else.

“Rex started playing at the square dances at the old Henderson Schoolhouse around 1960 and soon bluegrass was about all you heard. Rex loved bluegrass music. I don’t know anybody that loved it more or put more of themselves into promoting it. He deserves to be in the Alabama Bluegrass Music Hall of Fame. I’m so happy for him and proud of him, too.”