Trojans come up short in 23-20 loss to the Tigers 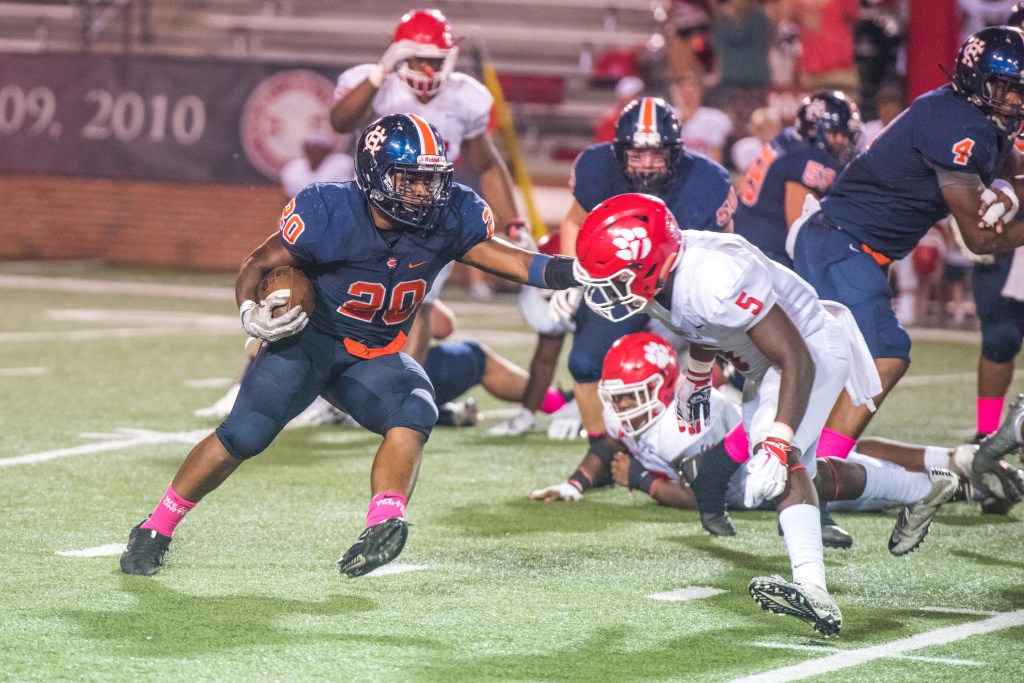 A last minute drive came up yards short as Charles Henderson High dropped a 23-20 heartbreaker to the Eufaula Tigers Friday night in a key Class 5A, Region 2 matchup in Troy’s Veterans Memorial Stadium.

The Trojans drove from their own 33 to inside the Eufaula 10 with less than a minute to play, but in the final seconds Eufaula linebacker Brooks Weeks picked off a Noah Lowery pass over the middle on fourth-and-five to preserve the win for the Tigers.

CHHS, falling to 3-4 overall and 2-2 in the region, will now likely play on the road in the first round of the Class 5A playoffs, while Eufaula, improving to 3-3 and 3-1 in the region, is in position to host their first round matchup.

“That was a tough pill to swallow, a tough game to lose,” said CHHS Head Coach Brad McCoy. “Our kids fought their butts off, and had every opportunity to win. We had plenty of opportunities to make the plays and win the ballgame, and we didn’t. That’s the bottom line.”

The Trojans took a 6-0 lead to open the game as they received the opening kickoff and drove 69 yards in six plays, with Lowery hitting DQ Toney for a beautiful 35-yard TD strike, the extra point was deflected, and the score was 6-0 at the 9:37 mark of the first quarter.

Lowery connected with Toney again two possessions later on a 29-yard touchdown pass play, the Trojans went for two points, but were not successful and the score was 12-0 with 0:55 to play in the first quarter.

A 67-yard kickoff return by Eufaula’s Joe Green put the Tigers in business, and five plays later Green ran in on a 1-yard carry, the PAT by Jacob Laing was good, and CHHS led 12-7 with 10:57 to play in the first half.

CHHS placekicker Cameron Bush hit a 29-yard field goal to give CHHS a 15-7 advantage at 4:15 in the half, but Eufaula made it a 15-14 game when quarterback Taylor Gover hit fullback Kyle Raper on a 28-yard pass play over the middle at the 1:42 mark.

The Tigers took a 17-15 lead on the second play of the fourth quarter when Laing booted a 32-yard field goal, but Bush matched Laing’s with his own 32-yarder, and the Trojans led 18-17 with 8:13 to play in the game.

Each team swapped punts, before Eufaula, facing fourth-and-ten, scored on a 48-yard touchdown pass play from Gover to Jaiden Dixon, the try for two points failed, and the Tigers led 23-18 with 2:33 to play in the game.

CHHS then moved the ball from the 33 to the Eufaula 5, before Weeks intercepted the ball on fourth down at the Eufaula 1. On the next play Gover took the snap and ran out of the end zone for the safety as time expired, giving CHHS two points, but a 23-20 Eufaula victory.

“We’ve got two more Region games with Rehobeth on Thursday on the road and Headland the following Friday here at home,” said McCoy, “We’ve just got to figure out a way to overcome and try not to let this sting us so bad that we don’t recover by next Thursday. For the most part, it does not mean we are out of the playoffs by any stretch, it just means that we probably will travel in the first round.”