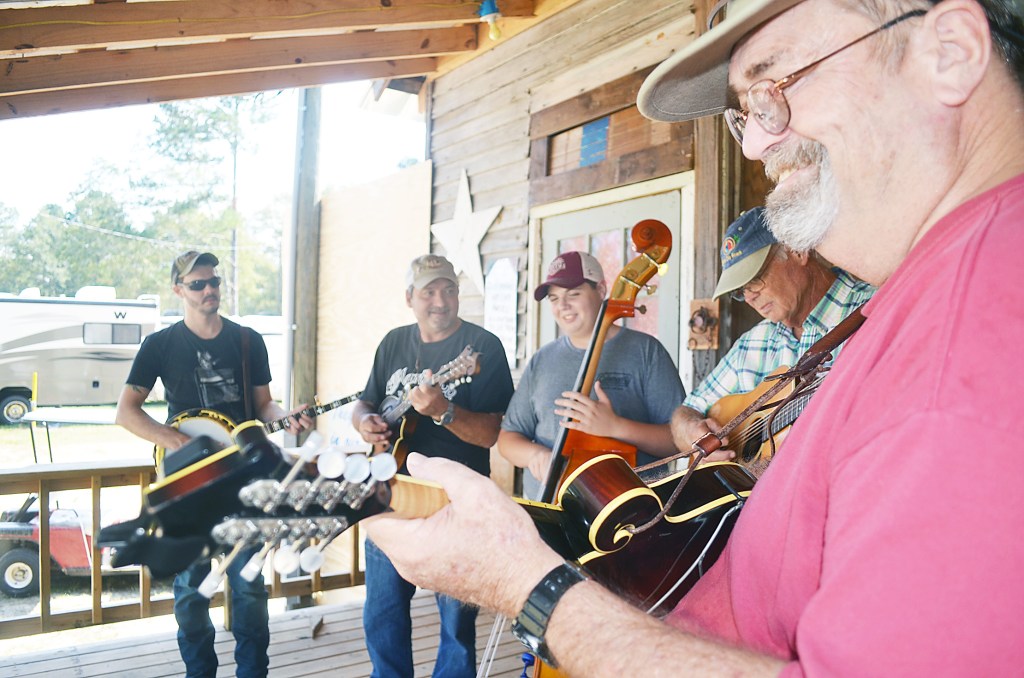 The Rex Locklar Memorial Bluegrass Festival is underway in Henderson and will continue through Saturday. Pictured from left are Jacob Littleton, Mark Conner, Zach Holt, Bill Strickland and Bill Johnson.

When George Boyle was about six years old, he and his eight-year-old sister appeared on Jake’s Medicine Show in their native Pennsylvania.

That’s about as far back as Boyle can trace his roots in old-time music.

Boyle settled down Thursday for a weekend of bluegrass music at Rex’s Music Park in the usually sleepy community of Henderson.

The festival gets underway today and will continue throughout Saturday late into the night. Admission continues to be $5 “if you’ve got it” as set by the late Rex Locklar, founder and king of the Rex’s Bluegrass Festivals.

Boyle has been coming to Ole Rex’s Bluegrass Festivals for 42 years.

“I’ve been coming twice a year, in October and in April for all those years and I’ve only missed one,” he said. “There’s nowhere I would rather be than right here in Henderson listening to bluegrass music with my ‘family.’ Bluegrass is not just music; it’s family.”

Boyle is like all of the others who make their way to the bluegrass festivals in Henderson that are now memorials to Rex Locklar – “Mr. Bluegrass” to all who knew him.

Locklar began organizing bluegrass festivals at the old Henderson Schoolhouse about 52 years ago and his friends are carrying on the “bluegrass family tradition” and keeping Locklar’s memory alive.

Bobby Jackson, a regular at the Henderson bluegrass festivals, talked candidly about Locklar and all that he did to promote bluegrass music.

He paused to shake a worm out of his guitar.

“I guess, the worm’s digging the music,” he said, laughing. “I hope he’s not a woodcutter.”

The pickers in his jam group laughed.

“That’s the way it is around here,” Jackson said. “Everybody is family and we have a good time. We’re all kind of like Rex. We don’t like a lot of change. Things are good here and we like to keep it that way.”

Jacob Littleton from up in Chilton County is a relative newcomer to bluegrass. He was playing rock ’n roll music before he picked up the banjo and got hooked on bluegrass.

And at Ole Rex’s Bluegrass Festival, you don’t have to pick and sing to have a good time.

“A lot of folks come just to sit and listen,” said Phil Cross. “Anybody that likes bluegrass music just has to love coming here. Out here, we’re all family and it’s bluegrass that keeps us that way.”

The public is invited to Henderson today and Saturday for some of the best bluegrass music around.