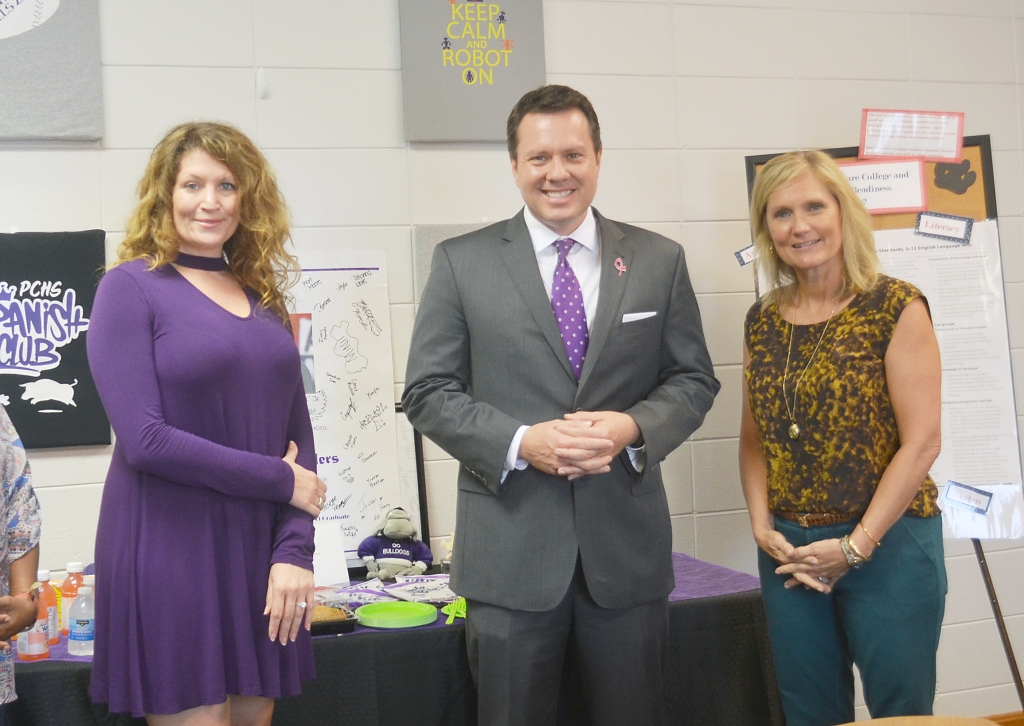 Jeff Sanders, Alabama News Network, was the featured speaker at the Pike County High School Gear Up program Tuesday. Sanders, a 1992 graduate of PCHS, told the students that his job is connecting with people and places around that state. On “Positively Alabama,” Sanders has opportunities to visit places that are uniquely Alabama. He showed the students a televised segment that introduced them to Gee’s Bend, which is positively Alabama. Sanders is pictured with Joanna Kilpatrick, GEAR coordinator, right, and his wife, Raelene Sanders.

Pike County High School 10th graders and Banks School cohorts are gearing up for success and the path they are taking leads through the classroom.

The students participated in Pike County High School Gear Up Kick Off Week September 18-22, which included video presentations and walking field trips to the Tupper Lightfoot Memorial Library. The programs focused on job skills in the 21st century.

Gaining Early Awareness and Readiness for Undergraduate Programs (GEAR UP) is a competitive grant program of the U.S. Department of Education that increases the number of low-income students who are prepared to enter and succeed in postsecondary education.

A highlight of Gear Up Week came on Tuesday when Jeff Sanders, assistant news anchor director at WAKA in Montgomery, visited his alma mater.

Sanders, a 1992 PCHS graduate, came home to share the story of his success in broadcast journalism.

Sanders said he had no idea what career path he wanted to take when he graduated PCHS, but he knew what he didn’t want to do – college and the military.

“My dad only had a third-grade education. My mother went through the 10th grade and later went back and got her GED,” Sanders said. “But they both knew the value of an education.”

Sanders also knew the value of an education and began asking himself, “What am I good at?”

He went to work in a column factory and, even if he were good at the jobs he was given, he was not happy. So, he changed paths and, at age 20, entered Troy State College as a freshman.

While there, a friend suggested that he visit the university’s TV station. What he saw interested him. He liked the idea of telling stories in a visual way. He began to volunteer at the station and later changed his major to broadcast journalism.

After graduation, Sanders worked as a “weather man” with WTVY in Dothan and later with the Alabama News Network at WAKA where he is today.

Sanders has found the answer to the question, “what am I good at?” He is good at broadcast journalism. He goes to work every morning to a job that he loves.

And, what Sanders has found is that everybody has a story.

“Those stories differ every day,” he said. “One day, the story might be of a family that has lost everything in a tornado or someone who is battling cancer or maybe of a governor that has been kicked out of office.”

Or the story might be of watching as his favorite football team, Alabama, loses the National Championship Game to Clemson in the last seconds.

“The stories are always changing,” he said. “Today’s story is not tomorrow’s story.”

Sanders told the students that the way the stories are told has changed dramatically over the years.

“The world has changed and how we tell those stories has changed and continues to change,” he said, as he picked up a small backpack that contained everything a reporter needs to “go live” from anywhere in the world.

But the one thing that has not changed is the medium through which the news is told – stories.

Sanders said he has had the opportunity to tell stories of heroes and people in power but the story that has made the greatest impact on him is the story of a 97-year-old man in Selma, known as the Checker Man.

“He would set up his checker board at flea markets and challenge anybody to play him,” Sanders said. “Nobody could beat him. He was the Checker Man—the Checker King.”

Telling the Checker Man’s story was important because his story was simply worth the telling.

“When you are in journalism, broadcast or print, you have opportunities every day to affect lives and you do that by telling stories,” Sanders said. “You become a part of many things and a part of many lives. That’s why I love getting up and going to work every day.”