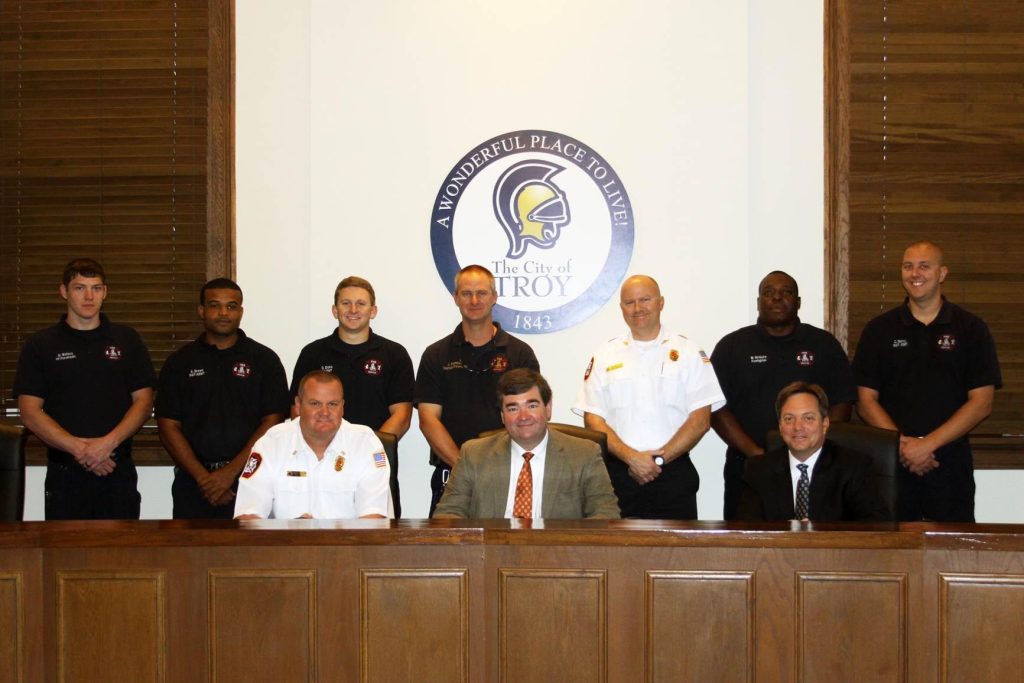 Mayor Jason Reeves and a crew from the troy Fire Department proclaims the week of October 8 through October 14 “Fire Prevention Week” in Troy on Monday, October 9, 2017.

The Troy Fire Department is pushing fire safety this week as part of “Fire Prevention Week” in Troy.

Troy Fire Marshal Brandy Cox said there are a few easy ways to prevent fires in the home.

“One of the biggest causes of fires in homes is cooking,” Cox said. “People will leave cooking unattended or leave a pan on the stove and either forget about it or fall asleep or something along those lines.”

Cox said anytime something is being cooked it should never be left unattended and people should make sure that cooking appliances are turned off before heading to bed.

Cox said there are also some other causes that people may not think of.

“Candles left unattended can start fires,” Cox said. “We had one instance where some flowers were left too close to a candle and it burned long enough that it fried the flowers out and ignited them”

In addition to being too near to flammable objects, Cox said candles can also potentially be knocked over by pets or children, so it’s best to keep nearby at all times.

Cox said heating appliances such as space heaters can also potentially cause an issue.

“Space heaters draw a lot of electricity,” Cox said. “If they’re being used with an extension cord, the cord can heat up to the point that it will melt the insulation. And any knick or damaged place in that cord can cause a short.”

Cox said space heaters aren’t the only electrical threat that could start a fire in the home.

“Any appliance that produces heat draws a lot of electricity, so it’s smart to always make sure your receptacles are in good shape,” Cox said. “Do not use an extension cord with these appliances. A lot of electrical systems in homes won’t support a space heater and something else of high voltage at the same time. A 36-inch clearance is usually required around space heaters to prevent the ignition of any adjacent flammable material.”

In addition to preventing fires, the fire department is focused specifically this week on promoting families having a second way out in the case of a fire and practicing that plan together.

“Families need to plan to have a meeting place outside of their home where everyone can be taken account of,” Cox said. “ Families also need to teach the occupants of that residence to have two ways out of the bedroom or residence whether that’s a window and a door or two doors or whatever it is for that home. That way there’s more than one way out of a room if a fire is blocking one exit.”