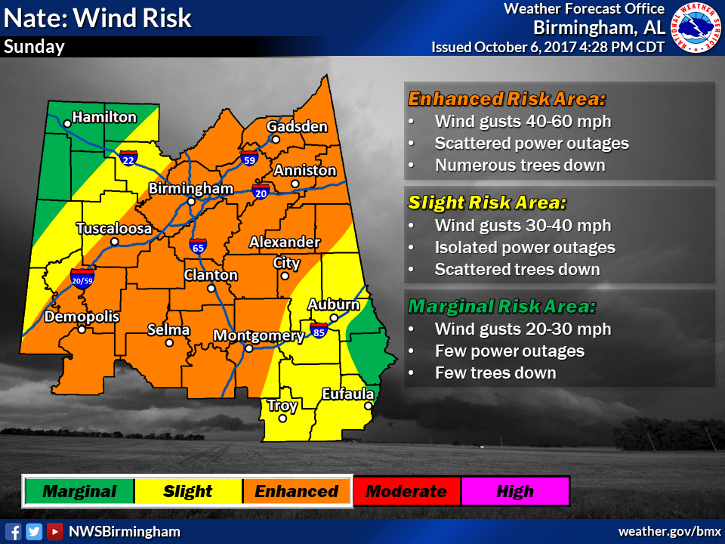 The latest map from the National Weather Service shows Troy at slight risk for winds.

Tropical Storm Nate, which is expected to become a hurricane by the time it makes landfall late Saturday night or early Sunday morning, could impact Pike County as the track shifts east.

“The track has shifted a little more back to the east and now encompasses a little bit more of Troy and Pike County,” said Herbert Reeves, interim EMA director. “The concern is still the eastern side of the storm as it comes through Alabama.”

The storm had been drifting westward on Thursday, Reeves said, but came back east as it makes its way into the Gulf of Mexico.

Reeves said it was still too early to tell Friday evening how much of an impact the storm will have on Pike County.

“The intensity of the storm remains the same,” Reeves said. “Saturday morning will determine our impact.”

Reeves and a team of emergency management officials will set up shop this morning at 8 a.m. in the Trojan Arena, the division Emergency Operations Center for Pike and nine surrounding counties.

Gov. Kay Ivey has declared a state of emergency to ensure the free flow of essential items such as fuel across Alabama and many Alabama counties are under a tropical storm watch, including Pike.

Reeves said the most recent expectation is for Nate to make landfall somewhere between Mobile and Pascagoula.

Reeve said the path of this storm is particularly important, as it is more compact and has less strength away from its eye.

“Irma expanded about 400 miles and Nate only goes out about 100 miles,” reeves said. “It’s also a fast-moving storm, so it isn’t expected to have much time to develop in the Gulf.”

The latest projections from the National Weather Service in Birmingham have Troy as a “slight” wind risk while Central Alabama is at an “enhanced” risk. However, Troy and much of South Alabama is at risk of isolated tornadoes while the rest of the state is not projected to have a tornado risk.

The latest projected maximum wind gusts for Pike County are 37 mph and sustained winds are projected to reach up to 26 mph.

Reeves said residents need to continue to be alert to changing forecasts in the case that Nate continues to shift east or develops more than expected in the Gulf.

The storm has already killed at least 22 people as it battered Central America on Thursday.

No announcements of closures or shelter opening have been made at this time.