Walden thanks Troy Fire Department for saving her life 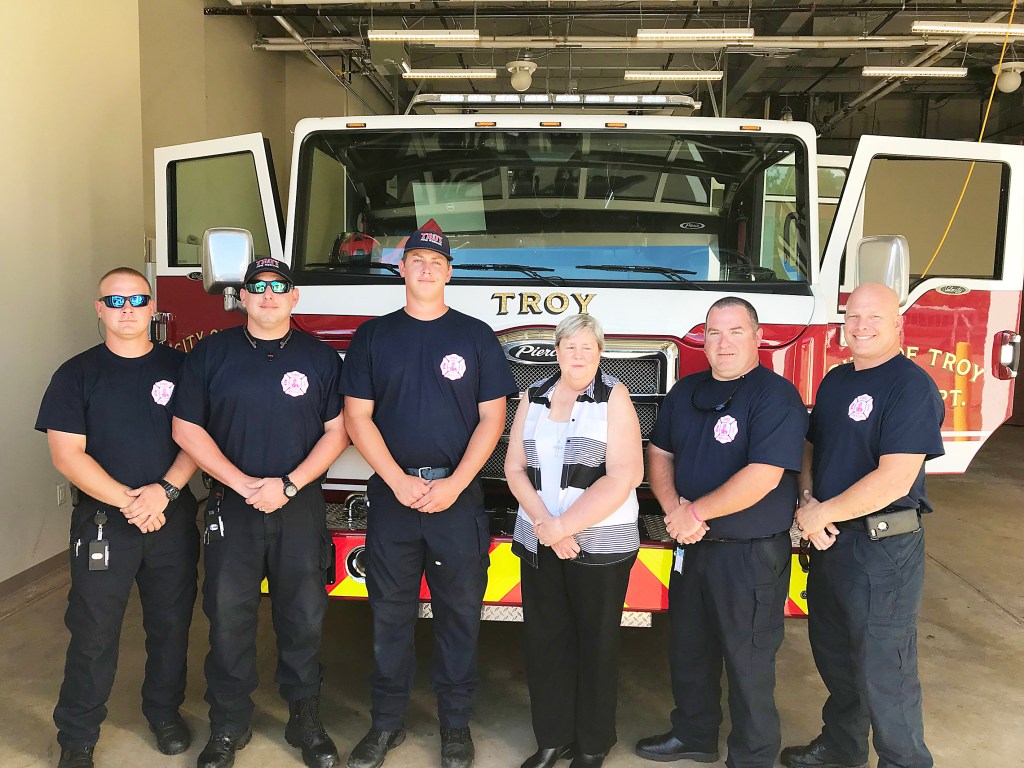 August 17, 2017 was a hot, humid day, Ovida Walden, comptroller at Troy Health and Rehabilitation Center, left work about 4:30 p.m.  She went to the parking lot and unlocked her car. That’s the last thing she remembers about that day.

“God laid me down,” Walden said. “When I fell, I didn’t hit my head and I didn’t get a single scratch from the pavement.”

At about that same time, firefighters from Troy Fire Station No. 3 were taking a short cut back to the station on Highway 87. As they passed TH&R, one of the firefighters saw a woman on the ground beside a car. The firefighters turned the truck around and went back to find Walden unresponsive and blue from the waist up.

“By the time, the firemen got to me, I’m told that 911 calls were beginning to come in,” Walden said. “I was in the next to the last stage of cardiac arrest. The firefighters began CPR and used the defibrillator and got my heart beating again. If they had not seen me and if they had not come back exactly when they did, I would not be here.”

Walden was taken to Troy Regional Medical Center and then airlifted to Jackson Hospital in Montgomery where she remained for a week.

On September 18, an implantable cardioverter defibrillator (ICD) was placed in her Walden’s chest.

Walden is in the single digit percentage of those with a similar experience who are brought back and are able to return to a full life.

“I’m told that most of those who are brought back from that condition only live long enough to say goodbye to their loved ones,” she said. “Only a single digit percentage is able to go back to a full life – to go back to work and live life again.”

Walden said she could never express her gratitude to the firefighters who did what had to be done to give her the opportunity to live.

“God placed them there and He gave them the knowledge and the ability to do what had to be done,” she said. “I am truly blessed and so thankful to God and to those firefighters.”

Walden visited the Troy Fire Station No. 3 on Wednesday to personally thank the firefighters.

“I wanted to see them and tell them what they mean to me and to our community,” Walden said.

Troy Fire Chief Michael Stephens said he was proud of the way the firefighters responded and so thankful for the outcome.

Looking back, Stephens said around 4:40 p.m. on August 17, Station No. 3 fire truck was returning from a call and was using the new road behind Publix to return to the station.

“One of the firefighters, Firefighter Joe Parrish noticed someone lying on the ground in the parking lot at Troy Health and Rehab,” Stephens said. “He thought it was a man working on his vehicle. But Capt. Darren Jordan said it looked like a woman, so they turned the truck around.”

Stephens said when the firefighters got on the scene, a TH&R employee was there and calling 911. Parrish, Jordan and Sgt.  JJ Farmer responded immediately. They were assisted by Capt. Charles Daniel Hussey, Sgt. Jason McManitle, Firefighter Blake Hermeling and Battalion Chief Curtiss Shaver who were dispatched to the scene.

“We were proud that something like this had such a good ending,” Stephens said. “Only about 5 percent of those who go into cardiac like Mrs. Walden fully recovers. This was a true blessing. But the big picture is that retired Chief Thomas Outlaw saw the need for EMTs in 2006 and paramedics in 2009 and that the new road came about in 2016. And, with Station 3 being on this side of town and with the support and manpower that the city gives us – all of this came together for this one call. If it has not, then we would not have had such a positive outcome.”