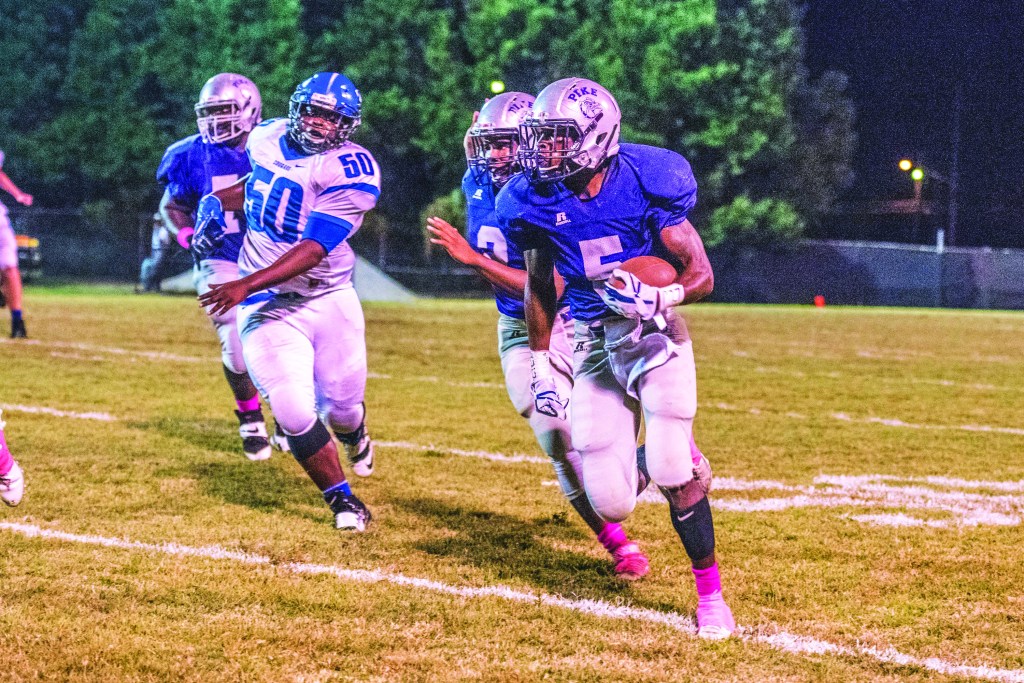 The Pike County Bulldogs hosted the Central Coosa County Cougars in regional play on Friday night. In the final home game of the regular season, Pike County (5-1, 3-1) defeated the Cougars (0-5, 0-3) 65-0 on homecoming night.

Pike County got off to a hot start after forcing a Central Coosa fumble on the Cougars’ second play of the game. The Bulldogs quickly took advantage of the turnover with a 32 yard touchdown run by running back Jahzarian Lampley.

After forcing Central Coosa into a three and out, Darrick Myhand’s 48 yard punt return set up another scoring drive for Pike County. After several runs by Zion Scott and Lampley, quarterback Kevon Harris snuck the ball into the end zone from two yards out to put the Bulldogs up 14-0.

The Cougars once again found little room on offense and was forced to punt the ball back to the Bulldogs after three plays. Pike County embarked on another scoring drive capped off by another Lampley touchdown run, this time from 17 yards out. After the failed two point conversion, the score was 20-0.

After forcing the Cougars into another three and out, Pike County blocked the ensuing punt and took over at the Coosa County 19 yard line. Running back Derrick Myhand’s 18 yard run set up a one yard quarterback sneak into the end zone by Harris. Following the missed extra point, the score was 26-0.

The two teams traded possessions before Pike County scored again late in the half, this time with a 23 yard touchdown pass from Harris to wide receiver Zerathan Mckinney bringing the score to 33-0.

Harris finished the game with 48 passing yards and one touchdown through the air on two completions.

At the half, Pike County held a 192-2 advantage in total offense and forced Central Coosa into four three-and-outs.

Pike County opened the second half with an 83 yard kickoff return for a touchdown by Lampley to increase the Bulldogs lead up to 40-0. Lampley led both teams with 152 rushing yards on just nine carries.

After Central Coosa’s three and out, Harris returned the ensuing punt for a touchdown. The extra point was missed, however, making the score 46-0.

The Bulldogs forced another three and out and took over early in the fourth quarter. Pike County began a clock-chewing drive that saw five different ball carriers. Running back Alexander Reynolds finished the drive off with a seven yard touchdown run to put the Bulldogs up 65-0.

Central Coosa fumbled the ball away on the first play of its drive and Pike County took over with 2:00 to play. The Bulldogs ran the clock out to finish the game.

For the game, Pike County outgained Central Coosa in total yards 367 to -12. The Bulldog defense prevented the Cougars from picking up any first downs and forced a three and out on seven possessions.

Following his team’s dominant performance, Pike County head coach Fred Holland didn’t have much offer but did note with a smile: “Our guys played good.”

Pike County will hit the road next week and face off with Prattville Christian Academy. That game will kick off at 7:00 pm.