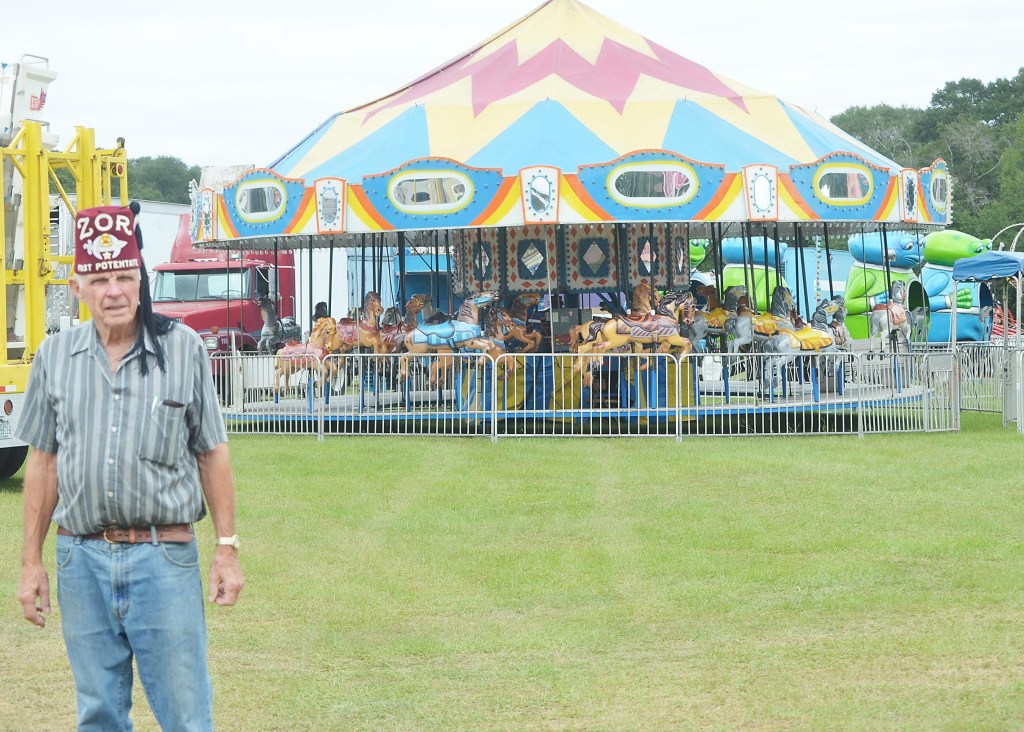 The Pike County Fair opens tonight with a 21-ride midway that features fun for people of all ages. Troy Shrine Club President Homer Homann, pictured above on the midway Monday, said the year’s county fair has all the ingredients that make county fairs community events. The gates open at 6 p.m. nightly through Saturday. The Benton Brothers and Company open the entertainment schedule at the Pavilion. Admission is $10 for adults and $5 for children 6-11. Armband presale ends at noon today. Armbands may be purchased at TB&T in Troy, Brundidge and Ariton, Pizza Palace in Brundidge and at the Shrine Club Office at the fairgrounds.

Homer Homann, president of the sponsoring Troy Shrine Club said, events are often advertised as “the biggest and best” but those are words of merit for the 2017 Pike County Fair.

“Modern Midway has brought in a new midway that promises thrills a minute for the more adventurous folks and fun and laughter for the kids,” Homann said.

“This is a midway that will be fun for everyone. Modern Midway has also brought the most popular rides for children and adults from last year. And there are two large fun houses for everyone. You won’t find a better midway at any county fair.”
Brian Morrisey, Modern Midway general manager, said, too, that the midway offers fun and excitement for all ages.

“We have 21 rides and we’ve brought new rides for adults and children,” Morrisey said. “We change the midway up every year and this year we’ve brought the Zipper, which is the wildest ride we have. It’s a favorite with teenagers.”

Other rides have descriptive names like Tornado, Hurricane, Yo-Yo and Rock ’n Roll. Thrilling rides include the Star Ship where centrifugal force keeps riders from spinning out into the universe and the Ali Baba which takes riders on a 360-degree upright, whirlwind ride. An 80-foot Gondola is a 21st century Ferris Wheel and Raiders is a playground-type obstacle course.

For the young riders, there’s the trademark Merry-Go-Round, the Dizzy Dragon, Aliens and other little super rides.

Crystal Lil’s is a house of mirrors and Clown City is a barrel of laughs.

Not only will the Troy Shrine Club’s annual county fair feature a midway of bigger and better rides that ever before, there will also be a circus, challenging games, in-house exhibits and a spectacular lineup of entertainment nightly in the pavilion beginning at 6:30 tonight with the Benton Brothers and Company.

Armband presale ends at noon today. The $20 armband is good for one night and may be purchased at Troy Bank & Trust in Troy, Brundidge and Ariton, Pizza Palace in Brundidge and at the Shrine Club Office at the Pike County Shrine Club at the fairgrounds. Two-for-one armband tickets are available for Wednesday night.