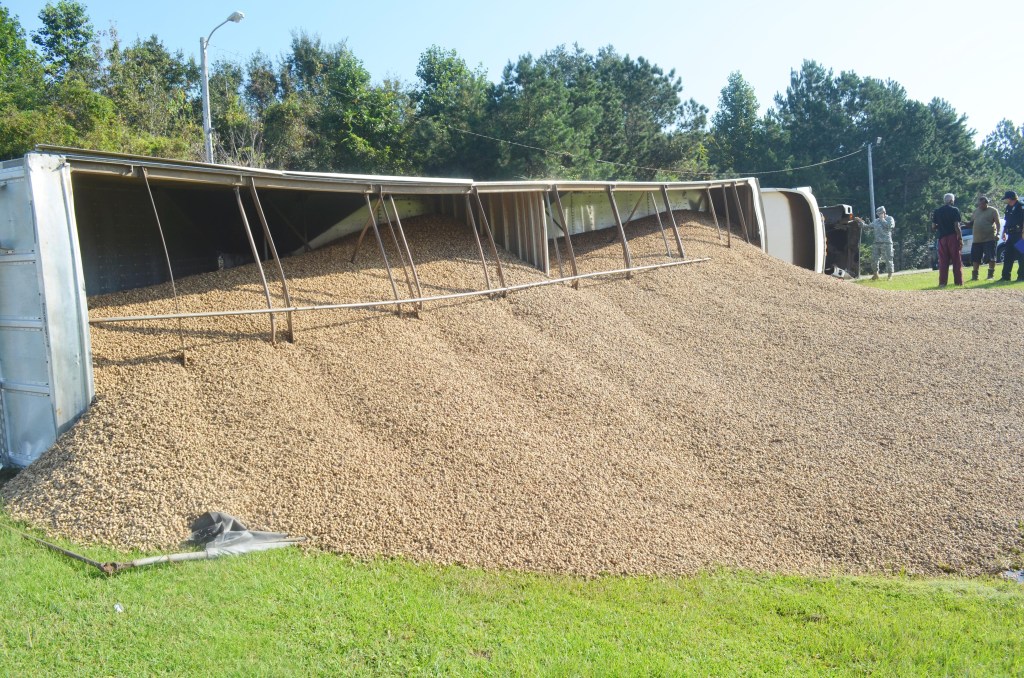 Peanuts spill out of an overturned truck at the intersection U.S Highway 231 and Alabama Highway 10 in Brundidge.

The quick action by the driver of a semi tractor-trailer loaded with an estimated 25 tons of in-shell peanuts likely avoided a disaster Friday morning near the intersection of U.S. Highway 231 and State Highway 10 in Brundidge.

The truck was traveling south on U.S. Highway 231 when the accident occurred.

Brundidge Police Chief Moses Davenport said the accident is still under investigation but it appeared that the brakes on the tractor failed, causing the driver of the rig, Odell Amos, to have to make an instantaneous decision to leave the highway and turn across Highway 231 north onto the Hobo Pantry property.

The truck was loaded with peanuts and the quick turn caused the truck and trailer to flip on its side, spilling the peanuts onto the ground

“The driver was not injured and no other vehicles were involved,” Davenport said. “It was fortunate that the traffic light for vehicles traveling north and south was on red. If the light had been green, vehicles could have been in the northbound lane and accidents could have occurred when the 18-wheeler came across the lanes.”

Davenport said Amos’ quick decision to turn off the highway also prevented the 18-wheeler from running into vehicles in the southbound lane that were stopped at the traffic light.

The accident occurred around 8:30 a.m. Friday.

Davenport said the call came into the Brundidge Police Station at 8:32 a.m. and the police responded at 8:34 a.m.

The 18-wheeler was hauling for Cedric Peak Company of Dalton, Georgia.