Trojans fall to Mustangs 20-14 on homecoming 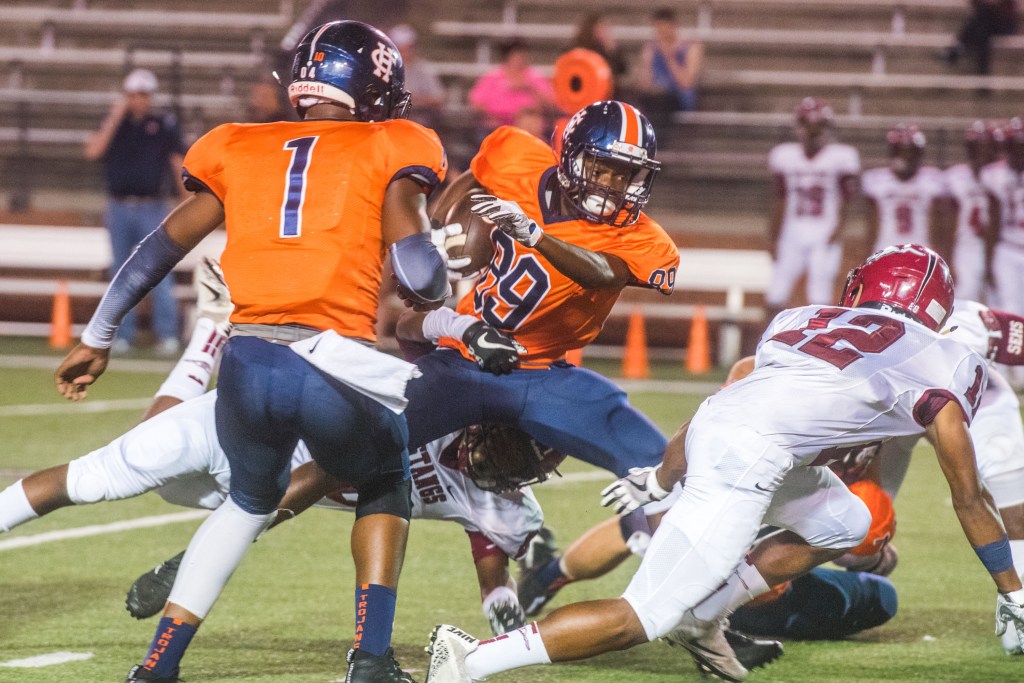 Charles Henderson High scored a touchdown midway of the fourth quarter to cut a Stanhope Elmore lead to six points, but the Class 6A Mustangs controlled the ball for the final eight minutes of the contest to hold on to a 20-14 win over the Trojans Friday night in Troy’s Veterans Memorial Stadium.

The Class 5A Trojans and the Class 6A Mustangs are each now 2-3 on the season, as CHHS dropped the Homecoming battle.

“Stanhope is a good football team, and you could see the excitement in them, for them beating us,” said CHHS Head Coach Brad McCoy. “I think that says a lot about our program. I’m not taking anything away from Coach (Brian) Bradford and his team, but I just know we have a good football team too. We’ve just got to get everybody well, that is the key.”

The Trojans started Friday’s non-region contest with several key injuries on offense and defense. Missing Friday evening were offensive starters DQ Toney, Cobi Jones and Jordan-Dix Hudson, while Tyrell Jones and Cobi Jones were both out on defense.

Both defenses controlled the early stages of the game, before Stanhope got on the board on a 10-yard touchdown carry by Willie Burkes, Conner Bradford added the extra point, and the Mustangs led 7-0 with 4:42 to play in the first half.

The Trojans scored on their first possession of the second half to knot the score at 7-7 as senior quarterback Noah Lowery ran it in from 8-yards out and Cameron Bush added the extra point with 5:38 to play in the third quarter.

Stanhope scored four plays later when quarterback Johnny Montgomery hit Logan Swindall who went down the right sideline for a 58-yard touchdown, the try for two failed, and the Mustangs led 13-7 at the 3:27 mark.

Jeremy Thompson of Stanhpe returned an interception 70 yards for a touchdown, Bradford’s PAT was good, and the Mustangs led 20-7 with 1:29 in the third.

The Trojans then marched 75 yards to make a game of it, with Lowery connecting with Jamal Smith for a 4-yard touchdown pass play, and Bush drilled the extra point to cut the lead to 20-14 with 8:19 to play in the game.

The Mustangs then marched from their own 28 to the CHHS 2 yard line to run out the clock and seal the 20-14 win over the Trojans.

Quantarius Daniels of Stanhope chewed up a lot of clock and yardage with 92 yards on 21 carries, while Travarasia Duncan gained 65 yards on 11 carries. Montgomery was 7 of 12 in passing for 122 yards.

“Its real evident that we have a lot of guys not playing due to injury,” said McCoy. “I’m not making excuses. We are trying to piece this thing together, and for us to do that like we’ve been doing and still have every opportunity to win the ballgame, it just says a lot about the guys that are on the field grinding and stepping up and learning and making plays.

“It is only going to give us more depth and make us better. That’s what I’m trying to get our guys to understand. Yes, it was a tough loss, and a non-region game, and we have another one next week. But we’ve got to get ready for Eufaula. That’s what has got to get on everybody’s mind. If we can beat Eufaula in two weeks, we will play at home in the playoffs, at least that is our feeling.”

The Trojans are at Trinity of Montgomery next Friday night in another non-region contest.