When deputies of the Pike County Sheriff’s Department executed a search warrant on a home in the Tarentum community Thursday, they found more than just drugs in the residence.

Sheriff Russell Thomas said they had been investigating John Derrick Haws, 34, for some time before obtaining information leading to a search warrant. 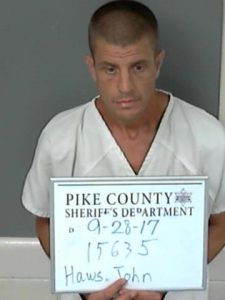 “During the search, deputies located over one ounce of methamphetamine, three ounces of marijuana, scales, a marijuana grinder and baggies – all of this used for distribution,” Thomas said. “He also had a .380 semiautomatic handgun and a sawed-off 20-gauge shotgun.”

Haws is charged with trafficking in illegal drugs, first-degree possession of marijuana and possession of a short-barreled shotgun: all felonies under Alabama law.

Trafficking in illegal drugs, when in reference to methamphetamine, carries a mandatory minimum of three years in prison. Possession of a short-barreled shotgun is punishable by up to 10 years in prison.

“Getting traffickers off the streets makes your community a safer and better place,” Thomas said. ”It cuts down a lot of the unwanted traffic. With drugs, you get a lot of other criminal activity such as theft and burglary as well; people trying to get money or items to trade with drug dealers.”