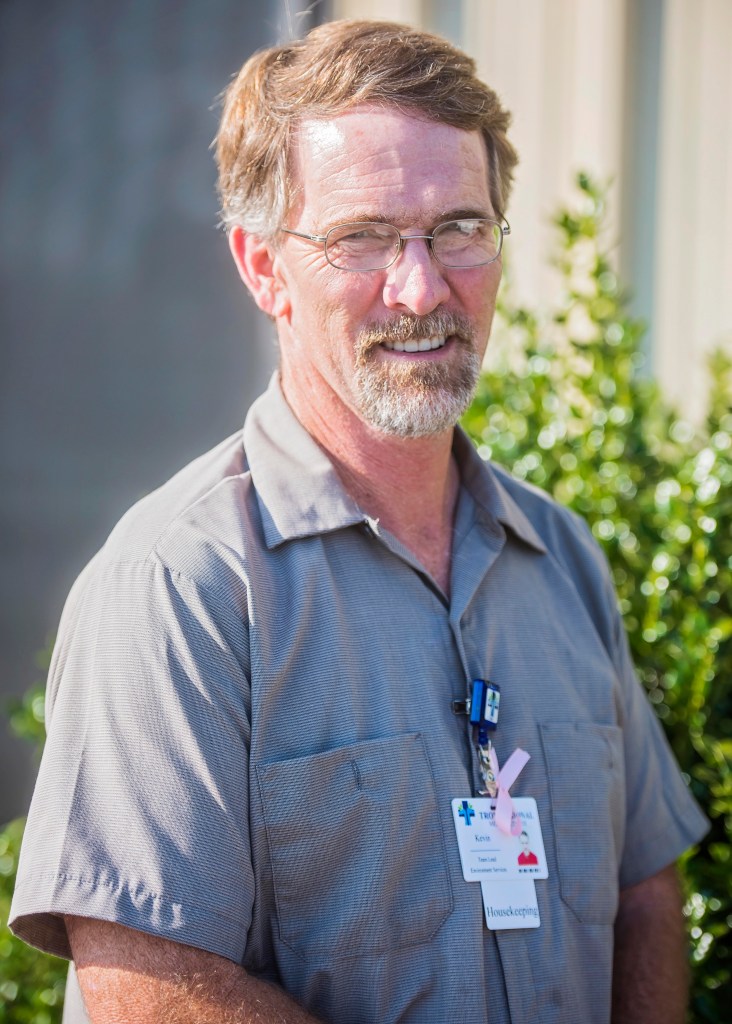 Messenger photo/Jaine Treadwell Kevin Etheridge says he didn’t do anything special by taking in a couple that had evacuated from Florida during Hurricane Irma. That couple, Arthur Speed and his wife from Ocala, would say otherwise. Etheridge is employed by Troy Regional Medical Center.

Trojan Kevin Ethridge said what he did was nothing.

But for Arthur Speed and his wife of Ocala, Florida, it was everything.

Speed penned a letter to Troy Regional Medical Center expressing his appreciation for the kindnesses shown to him and his wife by Ethridge as they searched for safe harbor during Hurricane Irma. He enclosed a letter-to-the-editor of his hometown newspaper explaining what Ethridge did for him and his wife during their time of need and to what degrees Ethridge went.

“I just wanted to show you the character of this man and what a valuable employee you have in him,” Speed wrote to TRMC.

Speed said he and his wife were fleeing Hurricane Irma but had failed to find lodging in four different states before they decided to try Alabama. Even if they had to sleep in their car with their dog, that’s what they would do.

After 13 hours on the road, they pulled into the Troy Regional Medical Center parking lot with thoughts of staying there for the night.  Speed went into the hospital looking for a public restroom and, by chance, he met Ethridge of TRMC environmental services and told him of his plight. Ethridge responded in “kindness.”

In his letter to the newspaper, Speed said Ethridge invited him and his wife to stay at his home, only 10 minutes from the hospital. After Ethridge got the couple settled, he drove to his mother’s home in Abbeville and stayed with her to give the Speeds privacy.

Two days later, when the hurricane changed paths westward, Ethridge found safer accommodations for the Speeds at a Troy motel.

Speed said he offered to pay Ethridge for his kindnesses but he refused.

“Kevin Ethridge was our savior,” Speed wrote to his local newspaper. “That’s why I wanted to acknowledge him and give him the credit he most certainly deserves. When people talk about Southern hospitality, Kevin exemplified what that really is. He will always be in our hearts and I consider him one of my best friends.”

Karen Herring, TRMC Marketing, said the letter from Arthur Speed exemplifies the quality of Kevin Ethridge and the Troy Regional Medical Center team and how far they will reach to make sure people, even those they do not know, have the care they need.

Ethridge said he didn’t do anything that others would not have done when placed in the same situation.

“I just happened to be in the right place at the right time to help,” he said. “When the Speeds pulled up, several of us at TRMC had been discussing the storm. Mr. Speed walked by the window and sort of tripped on the curb. I went out to check on him and learned that he was looking for a restroom.”

Realizing Speed was an evacuee, Ethridge said he, Karen Herring, TRMC marketing, and Dottie Black, TRMC Sleep Disorders Clinic, put their heads together in an effort to find accommodations for the Speeds. Ethridge and Black both offered for the couple to stay at their homes. However, they were not sure how Black’s dogs and the couple’s 40-pound Brittany spaniel would enjoy each other’s company.

The couple accepted Ethridge’s invitation to stay at his home and was very comfortable there. Then, Irma took a turn that could affect the Troy area.

“Not knowing what our weather was going to be, I thought the Speeds would be safer in a motel than in my mobile home,” Ethridge said. “And, we were lucky; someone had just checked out of the Best Western and they got the only available room in Troy.”

In the aftermath of Irma, Ethridge and the Speeds have kept in touch.

“They returned to their home to find limbs and brush,” he said. “They had a power outage for a short time but their home was not damaged. They were blessed.”

And, Ethridge said that he was blessed that the Speeds had come into his life.

“I’ve never been so humbled,” he said. “To be able to do something for someone in their time of need is a blessing. The Speeds are wonderful people and I am thankful that I had the opportunity to know them and to call them friends.”