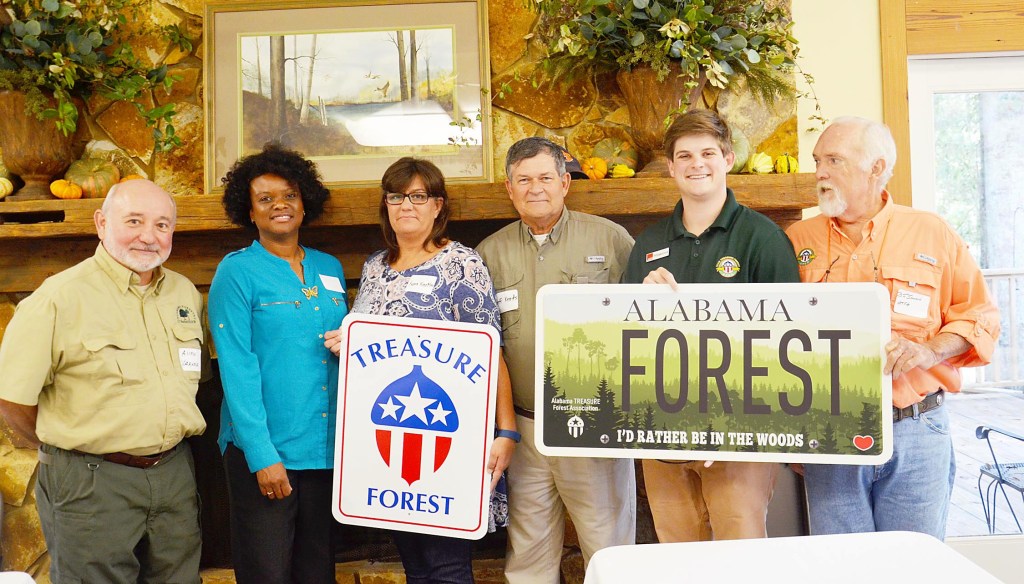 Two Pike County residents received a high honor for their family forest Wednesday at the latest meeting of the Wiregrass Area Forestry.

Allen Varner of the Alabama Forestry Association said awarding TREASURE Forest recognition to Jeff and Karen Knotts was the highlight of the meeting.

“Jeff and Karen have done a tremendous amount of hard work so that their forestland can be a TREASURE Forest,” Varner said. “They have done everything that is necessary from timber management, thinning and prescribed burning to the establishment of wildlife plots, to achieve this recognition.”

Their 80-acres forest in the Smart Road area is managed for timber, wildlife and recreation. Sixty acres are planted in pines.

Jeff Knotts said the family forest can be hunted or it can be a place of quiet reflection.

“If Karen is looking for me, she knows where I’ll be,” Knotts said. “I’ll be in the woods; that’s where I’d rather be.”

John and Carol Dorrill hosted the meeting Wednesday at their Clay Hill Farms near Pronto and a large gathering of representatives from various forestry related organizations attended.

The Dorrills welcomed the group to the Wiregrass Resource Conservation and Development Outreach event and expressed appreciation to all who attended.

Ronnie Davis of the Wiregrass RC&D spoke briefly to the group about the 10-county non-profit organization and its grant programs and its partnership with Alfa.

Through the grant program, 81 scholarships totaling $150,000 have been awarded to students at Auburn University who are enrolled in agriculture-related programs. In addition, $150,000 has been donated to the Children’s College in Birmingham. Eleven students have received funding to attend medical school. In return, they have agreed to work in rural areas of the state once their education is completed.

B.J. Johnson, Alabama TREASURE Forest Pike Chapter, reported that the chapter’s website is being rebuilt and will feature information that will be of great interest to forest owners and those who are considering re-planting or planting trees

The website will have videos about everything from tree harvesting to replanting. He also said that more assistance could be forthcoming from the state legislature and the Alabama Forest Commission to assist with the Classroom in the Forest program, which is an annual event of the local TREASURE Forest Association.

William Green, ATFA executive director, talked with the gathering about the importance of membership in the ATFA.

“The ATFA is funded through membership dues and funds generated through the license plate program,” he said.

The new ATFA license plate features a woodland scene and the wording; “I’d Rather Be in the Woods.”

Dana Stone, AFC Forest Health, discussed the concerns brought about by the Southern Pine Beetle and reported that the infestations were the result of drought conditions that began in October 2016. However, rains and cooler weather have resulted in declining reports of infestations. The Montgomery area continues to have a large number of reported infestations.