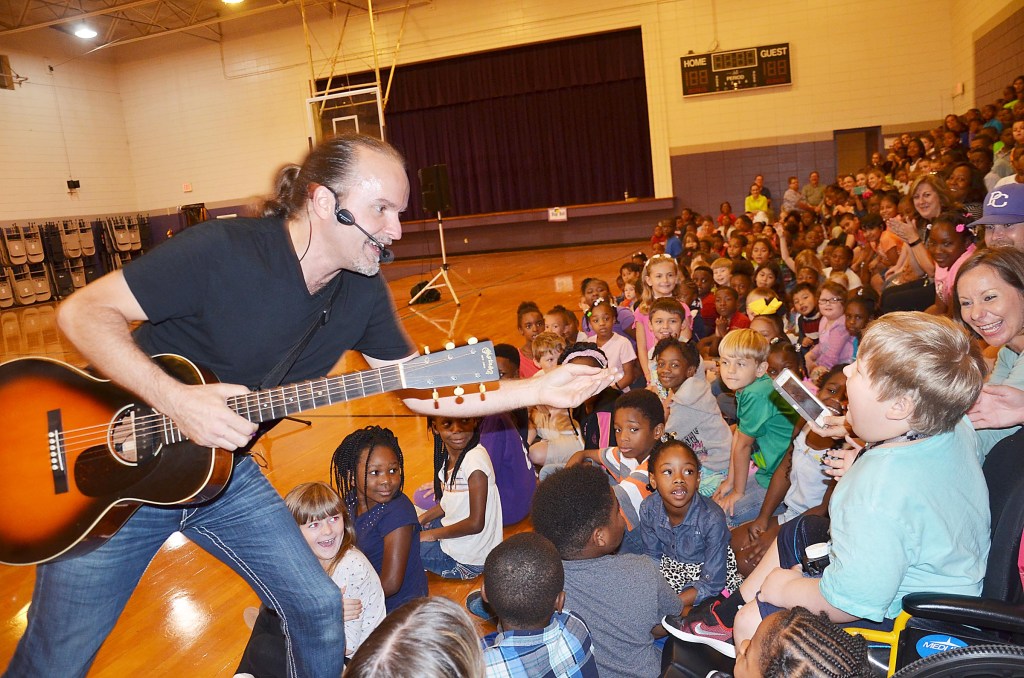 This is what the press kit says about award-winning guitarist Michael Kelsey: Michael may make use of technology, his improv skills, objects in the room and audience interaction to make music for the ears; but more importantly, a musical experience for the senses.

This is what Pike County Elementary School Principal Tracey Arnold said about Michael Kelsey: “All that and more.”

Kelsey performed for the elementary students in Brundidge Wednesday morning and the gymnasium was packed and everyone “had a blast.”

Arnold said the performance was exactly what she had hoped it would be and more, knowing Michael Kelsey’s reputation as one of the great guitarists and musicians.

“Michael Kelsey is an outstanding musician and performer and he has the ability to relate to young people,” Arnold said. “The exposure the students got to music, to sounds, to images and to a performer who can turn anything into a song was a unique educational experience.”

Kelsey said music, whether it’s a guitar, a piano or drums, creates feelings and emotions. And, music tells stories. That’s what he hopes to convey when he presents school programs.

He asked the students to describe the different moods they feel from time to time and with each mood, he expressed it with music. Happiness, sadness, anger, fear, love. Each mood he expressed with a few chords on the guitar and the students’ responses indicated instant recognition.

“Music is about feelings and emotions,” Kelsey said. “And you can write a song about anything.”

Kelsey composed songs on the spot. He borrowed a girl’s purse and sang a song about it. He turned a cell phone into a song, much to the delight of the young students and their teachers.

“We were so excited that Michael Kelsey was coming and we were just as excited to have him,” Arnold said. “It was a great experience for our students and we are anxious to have more programs like this.”

Arnold said she and her staff are in the process of writing a grant to bring more arts education programs to the school.

“We need more programs like this for our students,” she said. “The experiences broaden our horizons.”

Arnold expressed appreciation to Kelsey for a great arts experience for her students and to the Troy Arts Council for making the program possible.

Kelsey also performed at Pike Liberal Arts on Wednesday and will be at Troy Elementary and Charles Henderson High School today.

A public performance will be held at 7 p.m. tonight at The Studio in downtown Troy. Tickets are $25 and will be available at the door.

Michael Kelsey in Concert is sponsored by the Troy Arts Council with support from the Alabama State Council on the Arts and the National Endowment for the Arts.