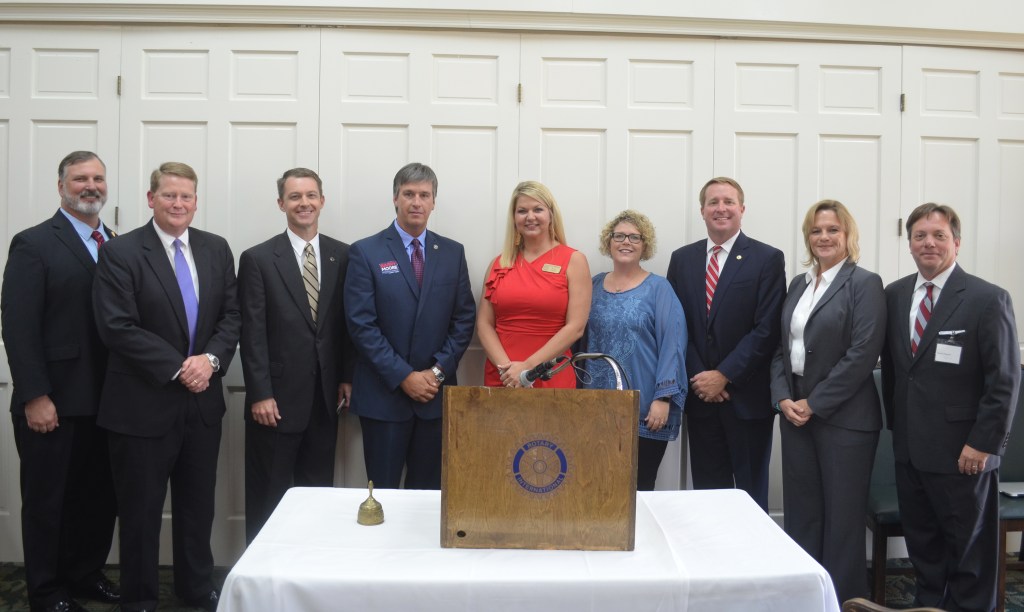 Twelve candidates vying for various offices representing Pike County told constituents about themselves and their campaigns Wednesday at the meeting of the Pike County Republican Women.

The highest office being sought after by candidates at the meeting is the U.S. Congress seat representing Alabama Congressional District 2, which includes Pike County.

Incumbent Martha Roby could not attend the meeting due to the House being in session, but was represented by Jimmy Copeland.

“My wife and I have known Martha and Riley, her husband, for 25 years now,” Copeland said. “We’ve worked together on many different things all these years and I’ve never gone to Martha on behalf of anyone in Pike County that there wasn’t a really strong response. The House in Washington has passed 100 percent of Trump’s bills and Martha has supported him 100 percent of the time. She does a great job with military at Fort Rucker and Pike County and other geographical areas she represents.”

Barry Moore of Enterprise, currently a representative in the State House, made his case for challenging Roby for the seat.

“I was born and raised down in Enterprise on a farm and currently run a small business,” Moore said. “Over time voting my convictions, I was labeled the most conservative vote in House. That put a big target on my back and they came for me and I got indicted; they dragged me through the mud, but I stood and was cleared.”

Two local politicians gave their best pitches to the crowd of over 50 people gathered at the Troy Country Club to win support for their runs at the District 89 seat in the Alabama House of Representatives, which represents Pike County.

Probate Judge Wes Allen and Troy City Council President Marcus Paramore are competing to take on the role after the retirement of longtime representative Alan Boothe.

“I’m honored to have served as Probate judge since April 2009,” Allen said. “You can go online and see what we have accomplished during my time at the probate office. I want to say thank you today. Thank you for supporting me in standing strong against foreign election monitors. Thank you for supporting me when former elected officials challenged us on our fiscally conservative policies and principles and we stood firm on what has paid off today. Thank you for supporting me when some out-of-state liberal activists descended on Pike County and wanted to force gay marriage into our courthouse and our churches, Your support made it easier to know we were doing the right thing then and are still doing the right thing now… I will always stand strong to defend our values in the State House as I have every day in your courthouse.”

“The main question that I understand about all this is ‘How do we want to make our home a better place to work, to worship and a better place for our children to play”’” Paramore said. “I have three things that I think people want: Low taxes, better paying jobs and better quality of life, especially for their children and grandchildren. My candidacy is centered around jobs and economic development. I’m pro-life, pro-traditional-family, I’m for the constitution, the bill of rights and all the amendments and I will fight every day to protect vets, family farms and our agricultural interests.”

Judges at the circuit, district and probate levels also spoke to the crowd.

Circuit judge candidate Sonny Reagan said he is uniquely qualified for the position based on his experience on both sides of the courtroom as a prosecutor and defense attorney.

Competing candidate Josh Wilson said he has experience within the system after being asked to serve as an assistant district attorney under District Attorney Tom Anderson .

District Judges Steven Curtis, January “Jana” Ellis and Virginia Green Nowling all gave some background on their experience in the legal system and spoke about the importance of district court, specifically focusing on juvenile cases regarding both juvenile delinquency and dependency.

Probate judge candidate Michael Bunn spoke despite being currently unopposed for the position, praising Allen for his work in the office and promising to continue the work of keeping the courthouse modern, not issuing marriage licenses and looking into satellite offices in Banks and Goshen to accompany the Brundidge office.

Circuit clerk Jamie Scarbrough is also unopposed at this time, but she spoke to constituents about the role that a circuit clerk plays in the court system and why it is important.

Deb Fortune used the opportunity to announce her candidacy for the District 6 seat on the Pike County Board of Education, which she said she is qualified for because of her 36 years in education.

The Pike County republican Women will meet again on the fourth Wednesday of October at the Troy Country Club at noon.