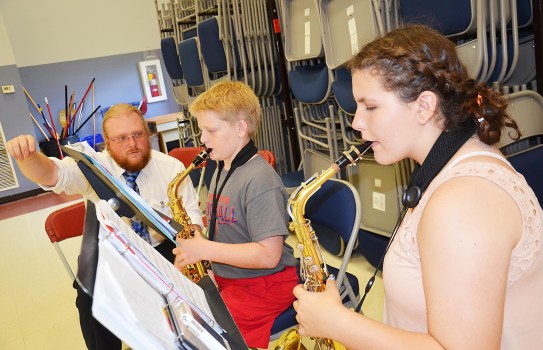 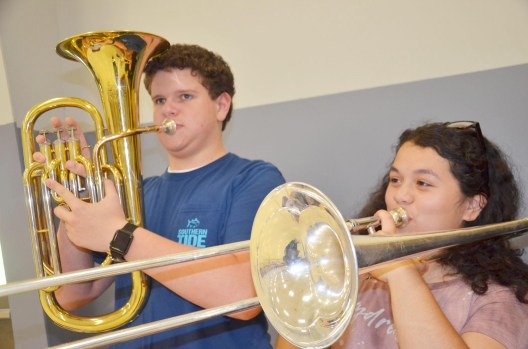 Abby Ford, Tiffany Johnson and Melissa Strickland gave thumbs-up to a proto-type of a uniform for the PLAS Pep Band. The band members are compiling a history of the PLAS bands. They have located an old band uniform and have found that old band uniforms are not as “cool” as the new styles. 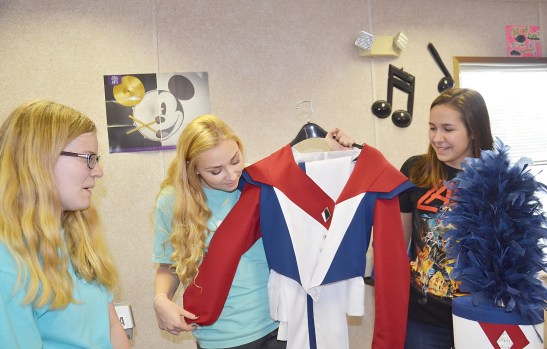 Low brass players Lawson Hips and Cathy Stockstill played a duet that resounded throughout the cafetorium where their practice session was held.

The Pike Liberal Arts Pep Band is small in number but plays like a big band.

The 24-member band received superior ratings at the Alabama Independent School Association’s State Band Festival at Enterprise and director Amada Ford could not have been prouder of her students.

“This was the first time the band performed on a world class stage and in a huge auditorium,” Ford said. “The acoustics were incredible and the sounds that were being played were not like any they had heard before. The band was outstanding. I was proud of them and proud for them.”

Although band is not new to PLAS, it is new in the sense that the 2017 band members are committed to longevity.

“PLAS has had a band program almost since it opened, but it was not a continuous program,” Ford said. “There is no history to band. When I came five years ago, the band was a snare drum and a music stand. Not much was remembered about the bands or any one band. So we began looking at old yearbooks to learn about the PLAS bands, when they were and who was in them.”

When questions were asked, memories were jogged and Ford realized there were a lot former students who had been in the PLAS bands.

“They loved being in the band, as all band members do,” she said. “But we could not find any old band music or uniforms and trophies. We were told where they might be stored but nothing was there. We did find an old uniform later and the band students were amazed at the way its style.”

Ford and band captain Isabel Robledo said the 2017 PLAS band has made a commitment to carrying on the PLAS band tradition and to making certain that the bands’ past history will not be forgotten.

They are asking all former PLAS band members, students, parents and anyone who has any band memorabilia to notify Ford or the school office.

“We don’t have any records and are the process of compiling any information on the band,” Ford said.

Plans are to go back to the first PLAS band and begin documenting the members, the directors, any competitions and awards the bands might have received.

“We would like to have band photographs – originals or copies – any music, uniforms or parts of uniforms,” Robledo said. “Anything that has anything to do with band at Pike Liberal Arts would be greatly appreciated.”

Robledo said band is an important program at PLAS.

“A lot of students play sports but there are those don’t and band is opportunity to participate in an activity that is important, too,” she said.

Anything that relates to the PLAS band helps Ford and her students as they build a band tradition, from a story told to a clarinet stuck back in closet or a musty old uniform in the attic.