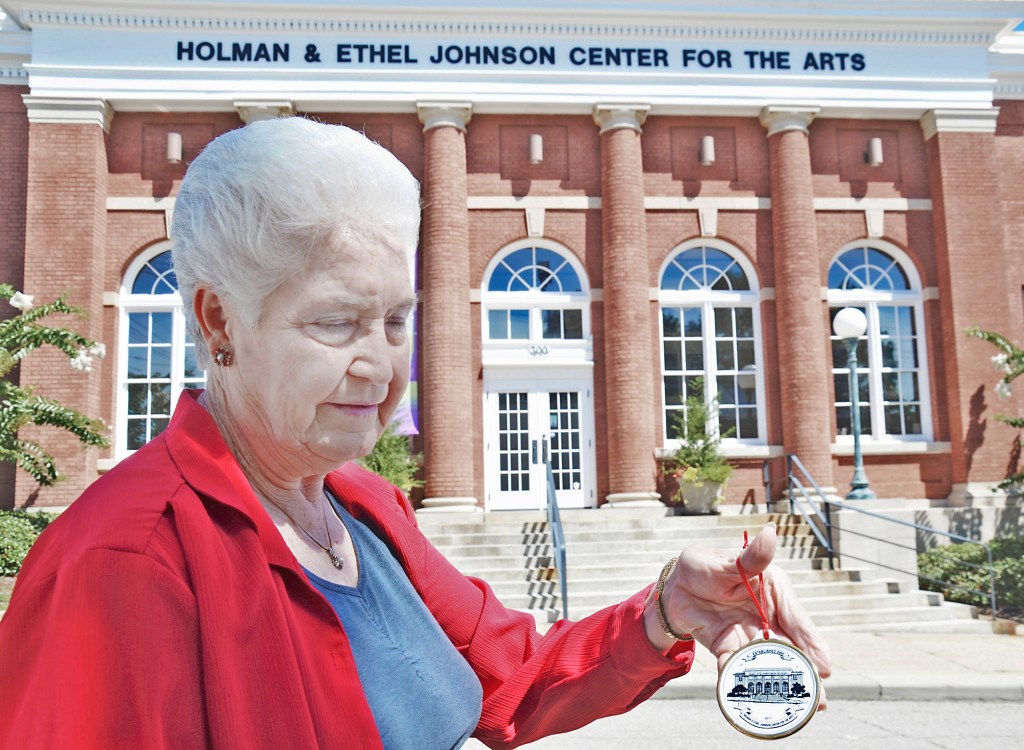 Troy artist Ruth Walker is the designer of the Johnson Center for the Arts 2017 Christmas ornament. Walker’s original pen and ink design was fired on fine porcelain and trimmed with 22k gold. The limited edition ornaments are on sale for $25 at the JCA at 300 East Walnut Street in Troy. For more information or to reserve an ornament, call 334-670-2287.

When she was eight years old, she found an advertisement in a magazine that offered artist wannabes the opportunity to “Draw Me.”

“If you were good enough, you could enroll in the Minneapolis School of Art,” Walker said. “I worked really hard to ‘Draw Me’ and mailed my drawing in hopes that I would be accepted.”

Walker was encouraged and, at the same time, disappointed by the reply she received.

“The letter said I was talented but I was not old enough to be admitted into the school of art,” she said. “I was invited to try again when I was older.”

When Walker was older and married, she once again applied to the Minneapolis School of Art. This time she was accepted and received a diploma from the art school through a correspondence course.

And that is the extent of the formal training Walker has received. For the most part she is a self-taught artist.

She retired from Troy University in 2000 as assistant director of creative arts. She, laughingly, said she knew next to nothing about computers and certainly nothing about computer generated art when she started at the university. Today, Walker is masterfully comfortable with computer generated art as evidenced by her “same as pen and ink” design for the Johnson Center for the Arts 2017 Christmas ornament that will be number 10 in the collection that features the artwork of local and invited artists.

“We are excited to have Ruth create our 2017 ornament,” said Wiley White, Johnson Center for the Arts exhibition coordinator. “She is an incredibly talented artist and a longtime supporter of the Johnson Center and the arts in Pike County. She is one of our dedicated docents and volunteers. It is an honor to have her create this year’s Christmas ornament.”

Walker’s contribution to the JCA’s Christmas Ornament Collection is a pen and ink drawing of the Holman and Ethel Johnson Center for the Arts fired on fine porcelain and framed with a 22k gold band.

The ornament commemorates the establishment of the Troy-Pike Cultural Arts Foundation in the year 2000 to begin raising funds for the center. The Johnson Center began as a grassroots effort by a group of dedicated art lovers whose mission it was to save the 1920 Classical Revival Style U.S. Post Office and transform it into the first and only art center in Pike County.

Walker said it is an honor to be asked to be among the artists who have create ornaments for the Johnson Center Christmas Ornament collection, which supports the exhibitions and programs at the JCA.

The 2017 JCA Christmas Ornaments are $25 and may be purchased at the Johnson Center for the Arts at 300 East Walnut Street in Troy. The JCA is open from 10 a.m. until 5 p.m. Wednesday through Thursday and until 3 p.m. on Saturday.