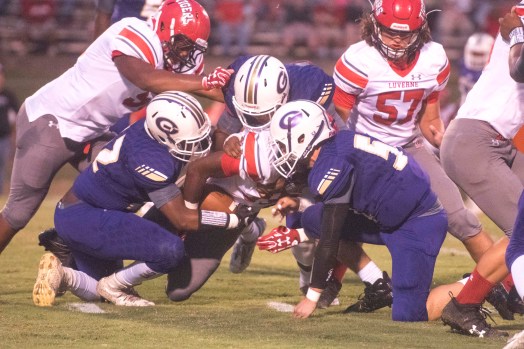 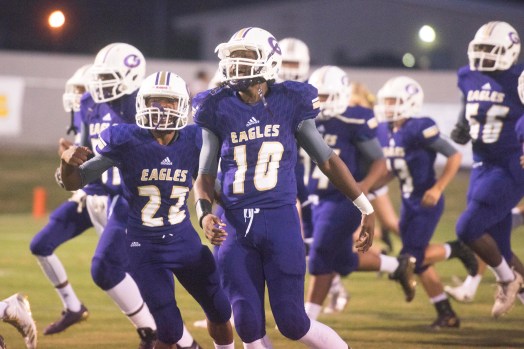 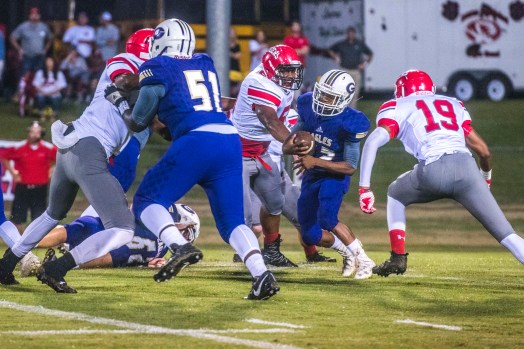 The Goshen Eagles squared off with regional rival Luverne (1-2) in the Eagles home opener on Friday. Goshen (3-0) defeated the Tigers 27-13 to improve to 2-0 in regional play.

The first quarter featured plenty of defense and a number of penalties. Luverne opened the game with a quick three and out.

That was followed by a long fruitless drive by Goshen that was stopped by a pair of penalties and a sack.

Following another three and out by the Tigers, Goshen took over from its own 49 and used a pair of long runs by quarterback Brock Snyder and running back Zack Alford to set up a first and goal. Luverne held the Eagles out of the end zone and Goshen settled for a 25 yard field goal made by Dawson Hamlin to break the deadlock as the quarter ended.

Luverne quickly answered on the other end with an 80 yard touchdown pass from quarterback Dionete’ Brantley to wide receiver Satyler Wilson. After the missed extra point, the Tigers kicked and recovered an onside kick to regain possession but was forced into a three and out.

Goshen took over on its own 21 yard line and embarked on a long scoring drive that ended with a one yard touchdown run by Snyder. Snyder was 2/2 through the air on the drive for 36 yards. Both passes were completed to wide receiver Iyan Hinkle.

Down 10-6 late in the second quarter, the Tigers opened the drive with a 20 yard completion to Tai’shawn Peagler. Luverne was soon in Goshen territory but had its drive stalled by an unsportsmanlike penalty.

The Eagles started their final drive of the half from their own 36 yard line. Snyder completed a pair of passes, one to wide receiver Eric Williams for 27 yards. That set up a 31 yard field goal by Hamlin just before the half ended to give Goshen a 13-6 lead.

On the ensuing Eagle drive, Alford acted as the workhorse and led Goshen on a 70 yard touchdown drive. Alford accounted for 37 of those yards, including the one yard touchdown run at the end. The extra point gave Goshen a 20-6 lead.

Alford led both teams with 111 rushing yards and two touchdowns in the game.

Luverne opened its next drive with two 15 yard runs by Brantley and running back Marcus McGhee before the third quarter ended. The Tigers drove to the Goshen 20 yard line but had their drive ended by a couple of tackles for loss, including a sack by Jaquentin Daniels.

Goshen took over and began a clock melting drive that resulted in a 17 yard touchdown run by Alford to extend the lead out to 27-6. The Eagles amassed 68 rushing yards on the drive.

After a late Tiger touchdown catch by Wilson, Goshen recovered the onside kick and iced the final minute of the game.

Snyder was an efficient 7/10 passing with 91 yards. He added another 93 yards on the ground and one touchdown.

“It’s always a big win when you can come in at home and win,” said Goshen head coach Bart Snyder after the game. “I’m proud of our kids for the things that they did, they held their composure and got a great win.”

Goshen returns to action next Friday with a home tilt against regional foe Elba at 7:00 pm.