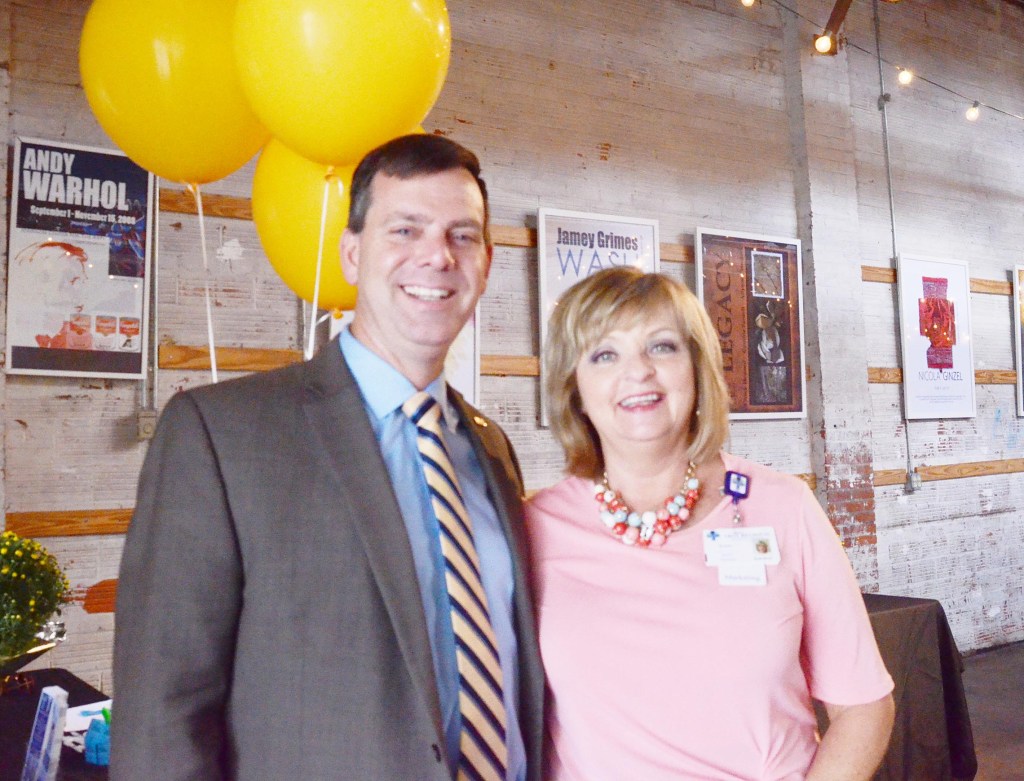 Having access to children’s cell phones is good parenting. Montgomery County District Attorney brought that message to the Female Factor at The Studio in Troy on Wednesday. Bailey is pictured with Karen Herring, TRMC marketing director.

“If you don’t have access to your children’s cell phones and don’t know their passwords, then you are not being a good parent,” he said.
Bailey said growing up has never been like it is in today’s world.

“A whole generation is lost,” he said. “They are the children of those who don’t know how to parent. These children are not being taught about laws, about consequences and about making good choices.”

And, then there are parents who are just in the dark about what is taking place in their children’s lives and in their own homes.

“Would you let a stranger go into your child’s bedroom and hang out?” he asked his audience. “That’s what is happening through social media. These young people are not on Facebook. They are using apps — apps like After School, Whisper, Vine, House Party and Yellow. Apps that parents need to go on and see what they are doing.”

Bailey said parents should know what apps their children have on their phones.

“If they don’t want you to see, then you need to see,” he said. “I have a 16-year-old daughter and I read every word on her phone. I need to know what is going on.”

Bailey gave an example of a mother in Birmingham who had no idea that anything troubling was going on in her daughter’s life until she found her hanging in her closet.

“The lady learned that her daughter was being bullied on social media because of her weight,” he said. “That’s one example of why it’s important for parents to check their children’s cell phones. Social media can be dangerous.”
Some video chat apps feature nude men and others are older men who disguise themselves as young men.

“Some of these apps target young girls,” Bailey said. “They ask personal questions and lure them into doing things such as sharing nude pictures. The Whisper app encourages young people to share their most intimate thoughts and their dark secrets. House Party is a live stream video app and it can be dangerous.”

He cautioned the audience about the Vault app in which calculators can be coded to hide photos.

“Even if parents ask for and are given the code, it could be a hidden code which allows the viewing of fake photos,” Bailey said. He again cautioned his audience to be alert to the dangers inherent in social media and not let a stranger hang out in a child’s bedroom.

“Don’t hesitate to ask to see their cell phones,” he said. “Be cautious of the apps they are using. Social media can be a dangerous place.”