Clyde May: The man behind the whiskey

With all the talk about the Conecuh Ridge Distillery coming to Troy with its Clyde May’s Whiskey, folks are asking, “Who’s Clyde May and what does he have to do with Conecuh Ridge?”

The answer is interesting, if not surprising.

Clyde May, a native of Bullock County, had the reputation of making the best branch-head brew anywhere along the Conecuh Ridge. The tale is that Clyde May ran more than 300 gallons of the good stuff each week at his still in the deep woods where signs were aptly posted, “Read and Run!” 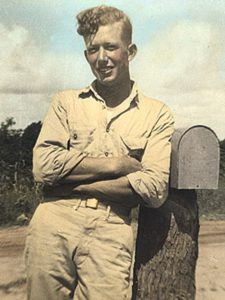 Clyde May’s whiskey was sold as unaged corn liquor but the really good stuff was aged in charred barrels with dried yard apples for flavor.

“Looks like now, our daddy’s name will be connected with the distillery in Troy and that’s good,” said William “Billy” May of Union Springs. “Daddy was a modest man; he was not prone to bragging but he could make some good whiskey. This was something that Kenny started as a tribute to our daddy and now that tribute will continue. I’m glad of that.”

May said his dad was a hard worker and, anything he did, he did it right.

“If daddy was putting up a barbed wire fence, the wire had to be perfectly straight and the posts had to be set straight. It all had to be done right. He was meticulous. And he took good care of all of us and, if a neighbor needed help, he was right there.”

May said his dad was among the breed of men who did what they had to do put food on the table for their families, even if it meant doing something illegal.

“Daddy wasn’t in the moonshine business to get rich,” he said. “He was trying to feed his family. But when you do something that long, it just gets in your blood. That’s why he kept on making moonshine.”

Clyde May served his country during World War II and came home to his wife and a family that grew to eight children.

Zelda May agreed with her brother that providing for their family was not an easy task for their dad.

In Wade Hall’s book, “Waters of Life from Conecuh Ridge: The Clyde May Story,” narrator Kenny May said his dad often said their hardscrabble farm was only good for growing pine trees, sandspurs, peanuts, young’uns and making moonshine whiskey. Clyde May wasn’t successful with the first four products but did all right with moonshining. ­

“Daddy tried his hand at farming but it wasn’t enough to take care of a big family,” Zelda May said. “He was good at making moonshine and that’s how he put food on the table for all of us. Daddy was a simple man and he loved his family and he looked out for our neighbors. He was a member of that wonderful community of people that lived through the Depression and a war and then had to struggle to make ends meet for their families. That generation looked a life from a different perspective –one that many don’t or can’t understand.

May said her memories of her dad are of how fun loving he was.

“Daddy would come up with songs and silly things that would make us laugh,” she said. “He was always picking at us. He was the kind of person that made life fun. But life was hard and it bent him.

“Whiskey has brought Daddy to the forefront and I hope his story will be told in such a way that people will know and understand that making moonshine whiskey was a way of life for those who were products of the time.”

Moonshiners like Clyde May weren’t gun totin’ rascals that made corn whiskey for the jingle that it put in their pockets. They were just simple men doing what they had to do to survive hard times, provide for their families and do what they could for their neighbors.

May said she is happy Troy was chosen as the site for the Conecuh Ridge Distillery.

“It’s close to home and I’m pleased with the recognition that my parents, Clyde and Mary C. May, are getting,” she said. “It’s a way for them to be recognized and whether it’s in our hands for not, it’s happened and I’m happy with it. Daddy was not a boastful man but I think he would have smiled and been pleased.”