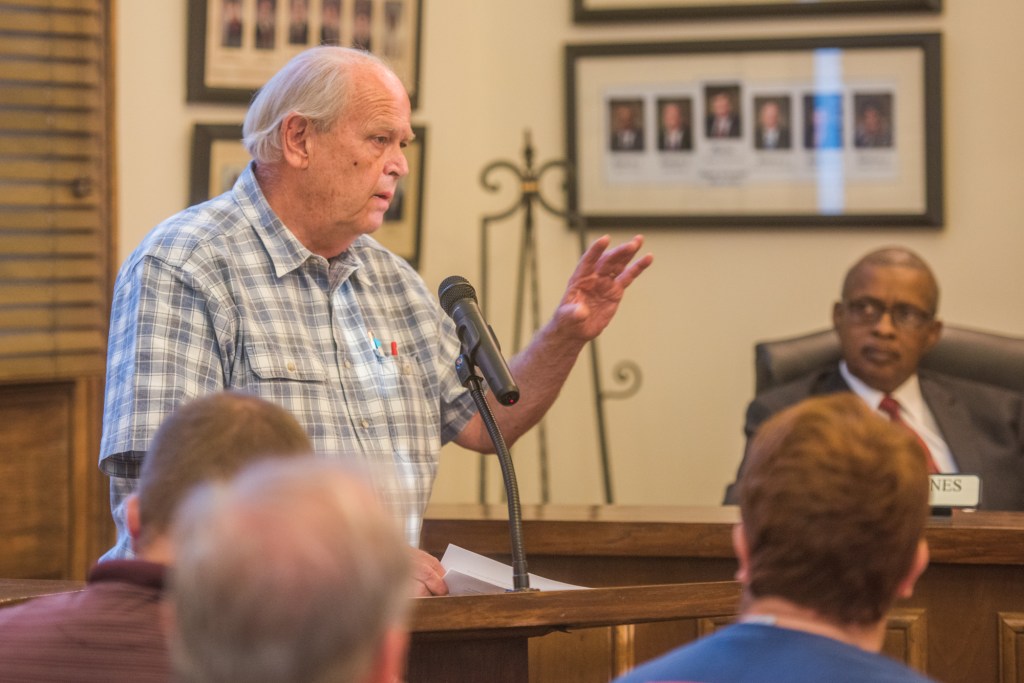 The city council Tuesday authorized the mayor to negotiate the final project agreement between the city and Conecuh Ridge Distillery, LLC. Above, Earl Ellis of Landmark Realty, resident and developer of Heritage Ridge next to where the distillery would be located, expressed his concerns Tuesday, along with other potential neighbors of the project.

People around the state could soon be visiting Troy to tour the Conecuh Ridge whiskey distillery as the Troy Council Tuesday authorized Mayor Jason Reeves to finalize negotiations with the company.

The city is offering $1.6 million initial incentive to the company with the potential for hundreds of thousands more in incentives over time based on certain criteria. The city will purchase a 76-acre property adjacent to the Heritage Ridge community and donate it to the company in exchange for the company investing $13.5 million into the community through the project’s construction.

Residents of Heritage Ridge attended the meeting to voice their opinions good and bad about the project potentially moving into their backyards.

“As a resident and the developer of Heritage ridge, which entirely borders this project, I am not necessarily opposed to the project but am definitely opposed to the location of the project,” said Earl Ellis of Landmark Realty. “I’m all for development in Troy, but I think this is the wrong site. I am opposed to this and so are many of the other property owners in this area. As a realtor, I’m almost 100 percent sure this will not increase property values, but decrease them.”

If the project is finalized in its current form, the property it would be located on would need to be rezoned as it is completely residential at this time. Reeves said that the industry would need special zoning though and would not be open to other kinds of industry if the distillery locates there and then flops.

Burt Fridland said he didn’t necessarily oppose the project, but had concerns about the process that the city had taken in introducing the project to the public and bringing it before the council.

“There’s still a lot of people that are not aware of what’s going on,” Fridland said. “One week is not enough. I’d like to ask the council to postpone their vote until their next meeting.”

City Clerk Alton Starling said the city has operated within the law during the process of recruiting the industry with Amendment 772 of the Alabama Constitution allowing cities to use funds to recruit industries and allowing for secrecy to keep the process confidential.

Reeves said the process of recruiting an industry like this starts in the state and is assigned a codename to keep information from being disclosed; this project was referred to as “Project Clearwater.”

“Communities from all over Alabama are invited to meet with the people that run the company and discuss with them what they want to do,” Reeves said. “In this process, these companies ask for confidentiality.”

Reeves said in this instance, the distillery was down to Troy, Greenville and Decatur.

Frances Givhan, who said she may be the closest neighbor to the site, said she was excited about the possibility.

“I’m delighted at the thought of having a business that brings people to the area and think it will be an attractive addition,” Givhan said. “I’m proud that our city is so appealing that a business would want to come here and choose us. It’s a great opporuntity and I’m very pleased.”

In addition to the initial investment from the company when it locates in the city, Reeves said the industry will be required to provide 30 jobs initially and 50 jobs thereafter with an average salary of $54,000. Reeves said he expects most of those jobs to be locally trained employees.

“You may have a few people with expertise but I think the company is looking to hire local people and train them and we would require that they primarily look here for employees,” Reeves said. “This is not a company that’s relocating either; they’ve been contracting to make their product but they’re looking to make Troy their home.”

Perry Green said the financial benefit to the city is obvious, but that the city should not sacrifice morals to develop the city.

“It comes down to just this,” Green said. “Is money or morals more important to the development of the City of Troy? Every bit as important to bringing business into the City of troy is bringing in the right business. I oppose the recruitment of an industry that brings so much destruction to this community, state and nation. As city leaders, you’re charged not just with growing the city financially, but morally as well. This is telling our children and grandchildren that drinking is a good thing and encouraging them to embrace and participate in one of the most harmful industries in business today.””

Councilwoman Wanda Moultry, district 5, said the decision to bring in the business should not be construed as supporting alcohol consumption by minors.

“We all worry about consumption and the effect it will have on our children,” Moultry said. “We’re in a position where it shouldn’t come down to money or morals. We need money to grow this city and we need o educate our children on how to treat alcohol. We need sidewalks, we need streets paved.”

Reeves said that traffic will come off of Trojan Terrace and trucks will not be going on Orion or Braswell street to access the site. He said the company is also going to limit deliveries to daytime to eliminate noise concerns. As for air quality and smell, Reeves said the air would be unaffected and the smell would be limited to being inside the structure with the vats, where yeast could be smelled.

Reeeves said aesthetics are as important to the company as they are to the residents.

“The company chose this particular site because of the natural beauty with the river and the pond there and all the trees,” Reeves said. There will be a 150 foot buffer from the streets and most of the distillery will be under the crest of the hill. This won’t be concrete and metal either; the distillery will look like a barn-type structure and another building will look like a cabin.” The Alabama Department of Transportation is expected to contribute another $1.2 million to the project to build a public access road to the site.