DEVELOPING: Irma weakens to Tropical storm as it heads toward Pike County 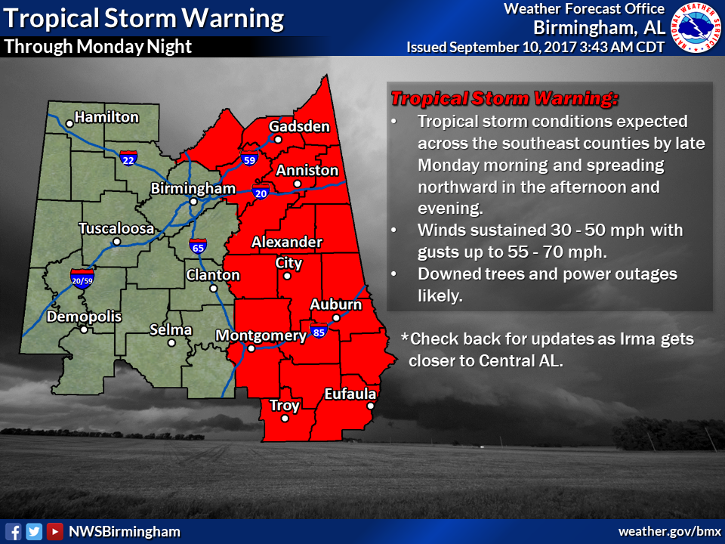 Irma has weakened into a Tropical Storm as it continues to slowly make it’s way north over Florida. The storm is projected to bring 30-40 mph sustained winds to Pike County sometime around midday and to last into the evening.

So far, Pike County has seen mostly light to moderate rain with some gusty winds. When winds pick up, gusts are expected to reach up to 59 miles an hour, bringing the danger of toppling trees and power outages.

With Hurricane Irma downgraded to a tropical storm, Brundidge City Manager Britt Thomas said Monday the city is open and ready to serve its citizens with business as usual.

“We are trusting that everything here will be okay,” Thomas said. “We are always alert to weather conditions and prepared to respond when the situation arises”

The city of Troy offices are still open right now, but Mayor Jason Reeves said they’ll be closing their doors at noon for the storm.

“We’ve brought everybody in mostly with the utility department, mostly to be available to handle calls,” Reeves said. “With it being the tenth yesterday , some people were expecting to come in today to pay their utility bills, but we’re not charging until September 15th. We’ll be closed to walk-in traffic by noon today and run our utilities command center from there.”

The city had prepared for the worst-case scenario of Irma staying in the Gulf and hitting the Big Bend of Florida as a Category 2 Hurricane. Fortunately for Southeastern Alabama, the storm tracked over Florida instead and weakened significantly over its course Sunday. But Troy is still expected to deal with Tropical Storm conditions.

“We’re still going to get some high winds and we have already had some very isolated outages,” Reeves said. “We expect and are prepared for more of those; we’re going to take it as it comes. We expect wind to pick up over the next few hours.”

The Messenger will be continuing to track the storm and its aftermath. Check back on the website and on our social media platforms for more updates as the day goes on.

Pike County officials gathered for a meeting Sunday afternoon to discuss the potential impact of Hurricane Irma, which is expected to be a tropical storm when it hits Pike County tomorrow.

Interim EMA director Herbert Reeves said that if it continues at same pace, the storm should begin to heavily impact the county sometime around 2 a.m. and will affect the county until at least midday.

The Pike County Commission has declared that all roads should be considered impassable starting at 2 a.m. Monday until further notice and that only emergency vehicles need to be on the road during the course of the storm.

Reeves recommended that businesses close their doors Monday and take a wait-and-see approach for the following day. New closures include SARHA Doctors Center, the Pike County Courthouse, the Colley Senior Complex and the Troy Nutrition Center.

The Pike County Commission has rescheduled their Monday meeting for the following week on September 18.

The Trojan Center is now available as a storm shelter in addition to the Troy Recreation Center.

Advanced Disposal will be continuing to collect trash throughout the week and will have extra men and equipment, so county residents can continue putting garbage out on their normal route days.

The Messenger will be continuing to track the storm and providing updates online and through our social media platforms.

If you know of any more closings of private business or any churches or businesses acting as shelters, please contact The Messenger via email or through Facebook.

Continue reading for earlier information regarding closures and storm progression.

Pike County is officially under a tropical storm warning according to the National Weather Service. Pike was put under a Tropical storm watch Saturday evening and was upgraded to a warning overnight.

In response, Troy City Schools, Pike County Schools and Pike Liberal Arts School have announced closures for Monday and Tuesday, joining Troy University. The Troy Parks and Recreation Department has also announced the closure of Pike County Lake on Monday and Tuesday and the cancellation of all activities at the center during those days. The Troy Recreation Center will be open as a shelter starting at 1:00 p.m. today. The Colley Senior Complex and the Troy Nutrition Center be closed tomorrow. The District EMA office will activate at 7 a.m. at Trojan Arena to be available and prepared to move resources as needed. Publix has also shifted it’s closing time earlier to noon today

Environmental services will be picking up Monday’s route today to get ahead of the weather.

As of right now, Troy is projected to have up to 35 mph sustained winds with gusts of up to 55 mph.  Residents should secure any loose items outside their homes and take precautions for power outages.

The Messenger will be continuing to monitor the storm and closings over the next 72 hours and will be updating the website and social media regularly.

Residents can also sign up for EMA alerts by going to smart911.com or visiting the Pike County 911 or Pike County EMA Facebook pages and clicking on the “sign up” button.