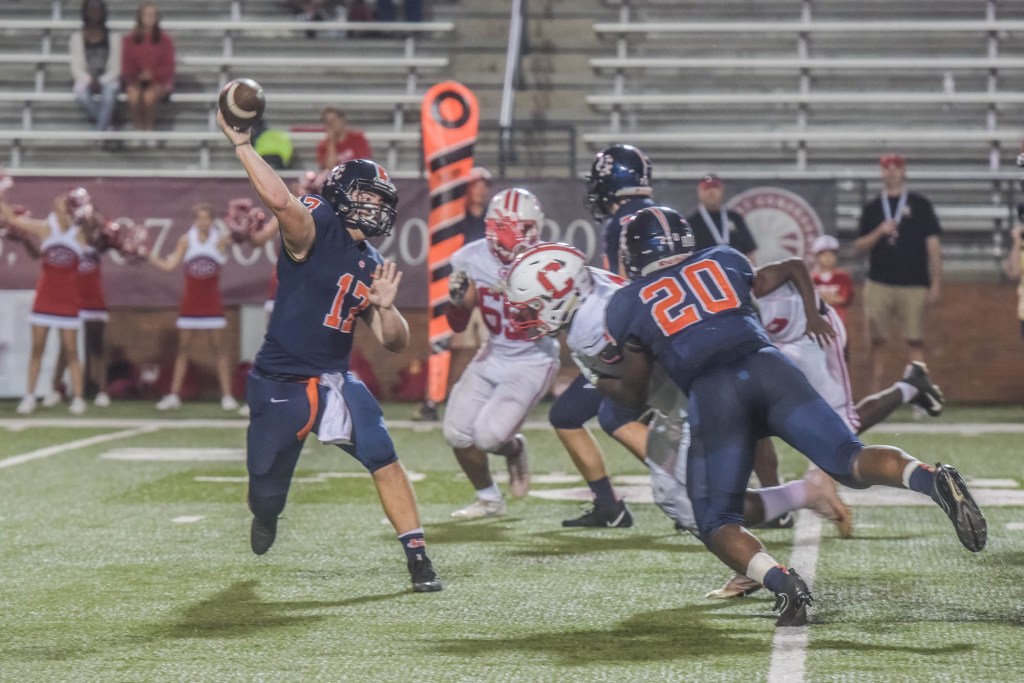 Charles Henderson High and Carroll of Ozark matched each other defensive stop for defensive stop, and when Carroll snuffed CHHS on fourth-and-goal at the 6 with 0:17 remaining in the game, it was the visiting Eagles that came away with a 10-3 win over the Trojans Friday night in Troy’s Veterans Memorial Stadium.

“We did not play very well on offense, I will just say that,” said CHHS Head Coach Brad McCoy. “It was a defensive battle, and they certainly played well enough to win the game. We had our opportunities down there in the red zone but could not convert. I think early in the game we had a couple of injuries that hampered us with personnel substitutions, but we have got to look at us when it comes to that. We have got to have a plan when guys go out. We’ve got to do a much better job as a coaching staff. But our guys, they played their hearts out.”

Carroll drove to the CHHS 14 on their first series, but junior safety Ahmad Dailey picked off a pass. The Trojans then driving to the Ozark 19, with Cameron Bush launching a 36-yard field goal, and the Trojans led 3-0.

In the second quarter the Trojans stopped the Eagles on two fourth-and-short attempts, once at the CHHS 23 and again at the CHHS 35, and the score remained 3-0 at halftime.

The Eagles got on the board on their first possession of the third quarter, moving to the CHHS 17 in five plays and settling for a 33-yard field goal by Edward White to tie the score 3-3.

The Trojans blocked a Carroll field goal attempt to open the fourth quarter, but were called for a flag on the play, and four plays later quarterback Clark Buchanan punched it in from 1 yard out, White kicked the PAT, and Carroll led 10-3.

CHHS faced fourth-and-goal at the 5 with 4:53 to play but could not convert, and with 0:17 seconds remaining could not score on fourth-and-six to give the ball back to the Eagles.

Jonathan Fells led the Eagles in rushing with 115 yards on 22 carries, while Jared Wilson of CHHS gained 81 yards on 16 carries.

The Trojans are on the road next week for another Class 5A, Region 2 matchup, at Greenville.

“I saw them in the spring, and I know they have a talented quarterback that can run and throw, and big tall receivers,” said McCoy “They are Greenville like they always are. Last year was very uncharacteristic of them not making the playoffs. They are better, and better defensively. They have a good team.”