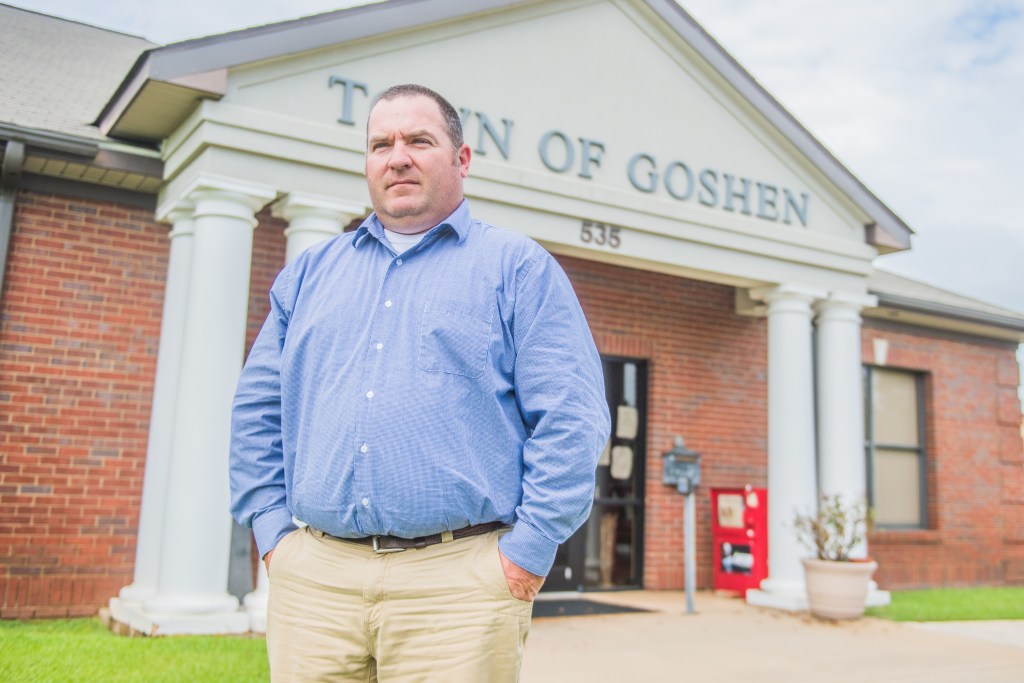 Darren Jordan serves his community in whatever he does, both as a Troy firefighter (above) and as a mayor of Goshen (inset).

Ever since Darren Jordan was a young child, riding with his father as he responded to fires and medical emergencies, he knew that he wanted to serve people.

“Other kids would come and try on the helmet, look at the fire truck and leave,” Jordan said. “But I was always around that. I would watch my dad on fire calls– he always told me ‘to sit in the truck while he worked the scene. But that planted a seed at an early age that I wanted to help people in need.”

Years later, Jordan is now serving the people not only as a firefighter in Troy and Goshen, but as Goshen’s mayor.

“I reckon it goes hand in hand because it’s giving back to people, some of them who actually helped raise you,” Jordan said. “When I ran, I wanted to protect what I’ve always known Goshen to be– a loving, caring town that gives so much.”

Jordan has lived in Goshen for all 38 years of his life and said he never had a desire to leave the town he has always called home.

“I always liked the small-town atmosphere,” Jordan said. In high school, most people couldn’t wait to get out of this place; most of my friends were looking to go to college.”

Jordan did go to college for a quarter, but said he just didn’t fit and came back to Goshen to work at Anderson Peanuts. At the age of 16, he decided to follow in his father’s footsteps fighting fires.

Eight years ago, he decided to run for a new venture on the Goshen Town Council, where he served two terms before being elected mayor, taking over the role from Jack Waller, who stepped down to run for a council position.

Jordan said his biggest issue as mayor is balancing Goshen’s small town feel that he loves while also trying to generate revenue in the community.

“I think as mayor, you want to leave it better than you found it,” Jordan said. With Goshen having such a small budget, it’s a fine line to walk keeping tax dollars here. It’s a big hurdle: at the same time, you want to create jobs for some of the local people here, but we’ve got to give people a reason to come here.”

Jordan said being a firefighter is a high-stress environment, but has been fortunate to not have a stressful time in office.

“Honestly, I’m very fortunate that the people here like to talk through things,” Jordan said. “I have an open-door policy; it’s their office, not mine. That’s the way I see it.  One of the things I love about this community is, in times of need, we have a can-do attitude. As a whole, it’s a selfless community.”

As a firefighter, Jordan said the calls that stick with him most are the ones that don’t end well.

“You always hear about the happy endings, but I can probably speak for most firefighters when I say it’s the ones that you lose that stay with you,” Jordan said. “We try our best to win every day, but you always go back and second-guess yourself. The day you go home and don’t feel you could have done better is the day you might not be right for the job anymore.”

In office, Jordan keeps the same mentality. At the end of the day, he wants to do better and win every day that he can.