GOT A FISH STORY? Hometown barber is glad you asked … 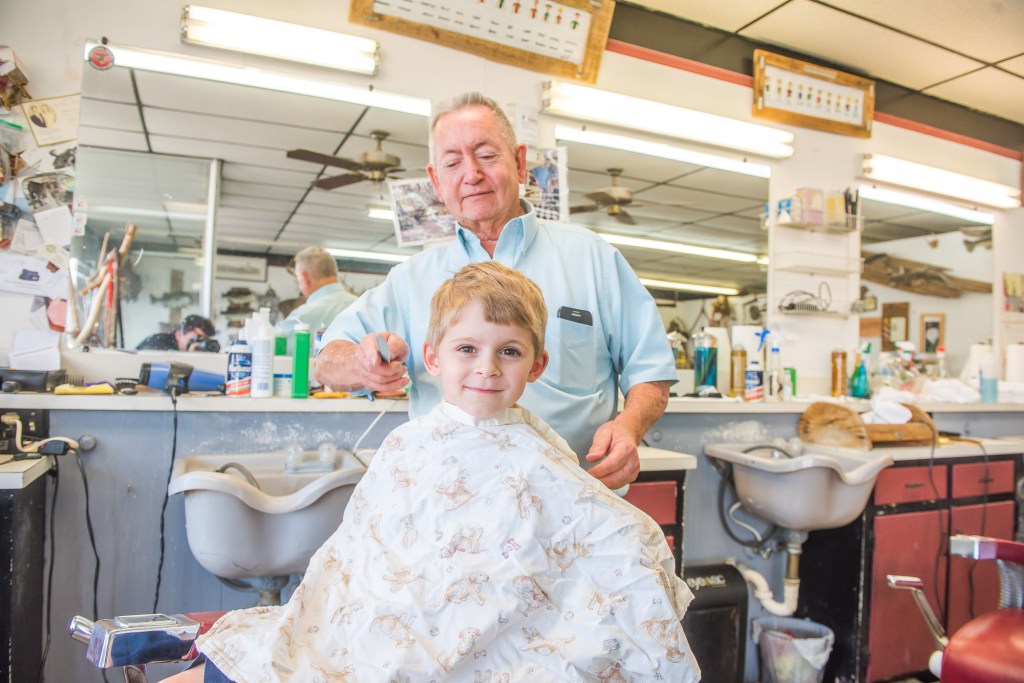 Raymond Ledform, above, cuts his grandson’s hair at the barber shop that is always a-buzz with chatter. Inset below, Ledford displays some of his extensive collection of the more than 400 walking sticks on display in his shop. The local barber has been cutting hair for 50 years and has cut hair for generations of Pike Countians and heard thousands of tales.

Raymond Ledford may not be able to whistle while he works but he can flat sure tell a story – or maybe, perhaps, a tall tale. Ledford’s barbershop is always a-buzz with chatter – “not gossip, hunting and fishing stories.”

“Have you been fishing lately,” a customer will ask.

“I just happen to have a picture …,” Ledford will answer.

Between, during and after a haircut, Ledford entertains his customer with stories and/or tales.

“Never have given a singe,” he said in response to a curious customer. “Red Stinson gave singes. You dry the hair, comb it up and singe it off.  Elmer Cardwell was giving a singe one day. He lit the pipe cleaner and stuck it to the man’s hair and ‘Whoop!’ the man’s whole head flamed up…”

All the customers laughed along with Ledford’s second-chair barber.

Ledford is almost as good an entertainer as he is a barber.

He has been cutting hair in Troy for neigh about 57 years and that’s not counting the years he did “home cuts.” He barbered with the late Junior Bird for 18 years and has been in his shop on South Brundidge Street for 40 years.

At age 14, Ledford was barbering at the Alabama Baptist Children’s Home where he had lived since he was eight years old.

“The welfare lady came and got me and my brother, Fuzz, and took us to the children’s home,” Ledford said. “Our two older brothers were already there.”

At the children’s home, Ledford had a place to belong and made fast and close friends, Johnny Scroggins and Robert Earl “Pale” Smith. The three of them hunted and fished together and he and Pale learned to cut hair.

“The boys lived in different cottages and when they first sent them to get haircuts, we gave them buzz cuts,” Ledford said. “We learned to give flattops and, of course, we trimmed.  I cut hair at the Children’s Home for four years. That was a good learning experience for me.”

But between haircuts, Ledford said he and his friends “ran wild” coon hunting and fishing. His senior year, he moved to town with his friends, Johnny and “Pale,” who were two years older.

“So, they were old men when I was in knee pants,” Ledford said, laughing.

The administration bucked at Ledford’s leaving the Children’s Home before he finished high school but he held true on his promise to graduate.

Most of Ledford’s family had move to Pennsylvania, so after high school graduation, he gave that a try but there was too much traffic and too many people there for him.

“My family tried to get me to stay,” he said. “They said there’s nobody in Troy for you. I said, ‘you just don’t know.’”

Ledford came back “home” and to doing what he loved best –hunting, fishing and cutting hair.

At home in Pike County, Ledford found yet another friend in Walter Morgan who had a wife who made cream corn in a foot-long, three-inch deep pan.

Along about that time, he met Cherry Austin and within six weeks time they were married.

“Marrying Cherry was the best thing that ever happened to me,” Ledford said, with a smile. “We had three boys and we’ve got 12 grandchildren and several greats and they are the best parts of our lives. We’ve had tragedy but we’ve had good times, too.”

Back at the barbershop, Friday morning, Ledford  shook the hair off Clayton Berry’s chair cloth and asked, “You ever eat beaver? It’s dark meat, a beaver roast is. I shot my first beaver right between the eyes. He came up out of air bubbles and I put my gun right on him.”

He then told how a beaver bit right through a dog’s jaw and the dog gave the beaver more than he wanted. The hunters had to twist the dog’s ears to make him let go of the 48-pound beaver.

“Back when I was four years old, I was catching red hawk sucker fish off the bottom of the river,” he said, as if it were the gospel.  “My brother and me would take a straight pin and bend it and tie it on he end of a piece of thread and fish with it.”

About this time, Ledford’s audience was leaning in to hear the story. He told about the time he was catching so many fish that he was having to yo-yo them in. Just out of the blue, one fish jump out of the pond on its own.

“I threw it back and told it to ‘wait your turn!’” Ledford said, with a throwing motion.

Parker Mount climbed in Ledford’s chair and settled in.

With his audience on the line, Ledford reeled them in with yet another fish tale.

“I took two Prince Albert cans and put them in my shirt pockets and I caught so many fish that I filled up the cans,” he said. “I had to walk about a half mile uphill back home and by the time I got there my back was hurting me, having to carry the heavy weight of all those fish.”

Ledford’s audience chuckled and shook their heads and probably didn’t hear when he said the stories were “borrowed” and he was “giving them back.”

A customer who had been across the room reading the newspaper took his turn in the chair.

“Been fishing lately?” he asked.

“I just happened to have a picture …,” Ledford said.