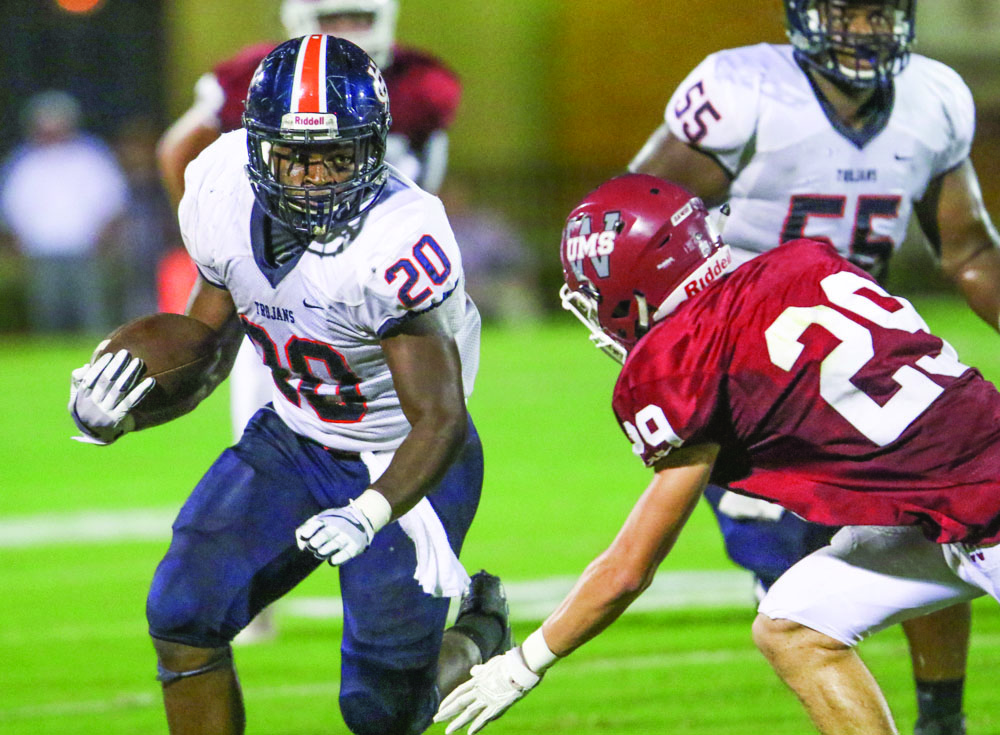 MOBILE, AL – Charles Henderson High knew it would be tough to win on the road in Ervin Cooper Stadium against UMS Wright Prep, and a great rally came up short as the Bulldogs defeated the Trojans 27-22 Friday night in the season opener for CHHS.

“We told our team that we were not going to be able to give them anything,” said CHHS Head Coach Brad McCoy. “It’s hard enough traveling three hours, and playing a quality UMS team, so we knew the cards were stacked against us. That’s what I’m most proud of with these guys, with us being down three scores, and they fought and they fought and I know they are going to want to hang their head, but they have absolutely no room to.”

CHHS trailed at one point 21-2, but cut the lead to five points with a furious rally.

UMS Wright, ranked No. 2 in the state in AHSAA Class 4A, scored on their first possession as sophomore running back Symon Smith broke a 38-yard touchdown, the extra point by Seth Davis was good, and the Bulldogs led 7-0 with 8:35 to go in the first quarter.

The Bulldogs scored again on their next series on a 1-yard TD carry by senior running back Dylan Casstevens for the 14-0 lead.

UMS later fumbled the ball in their own end zone but recovered as the Trojan defense piled on for a safety, cutting the lead to 14-2 with 9:30 remaining in the second quarter, and that was the score at halftime.

It appeared the Bulldogs would pull away when they went up 21-2 on a 61-yard drive, with Casstevens taking it in from 5 yards out with 3:06 to play in the third, but the Trojans quickly fought back to make a game of it.

On the second play of their next series, senior running back Jared Wilson, who finished the night with 163 yards rushing, showed the explosiveness that has several schools looking at him, bursting down the right side and breaking two tackles for a 73-yard touchdown.

The Trojans went for the two-point conversion, with quarterback Noah Lowery hitting Jaden Scott to make the score 21-10.

Smith, who finished unofficially with 208 yards on the night, then broke a 61-yard TD to put the Bulldogs up 27-10, as the extra point failed.

CHHS cut the lead to 27-16 when Lowery pitched out to Colbi Jones on a reverse, who raced 53 yards for the TD. The extra point was blocked, with 11:38 to play in the game.

The Trojans marched 67 yards for a TD on their next possession to make the score 27-22, with Lowery heaving a 35-yard pass to DQ Toney, and the try for two was no good.

UMS got the ball with 3:46 to play in the game, and held the ball for the remainder of the contest for the win.