REUNITING: 1969 PCHS team getting back together 47 years later 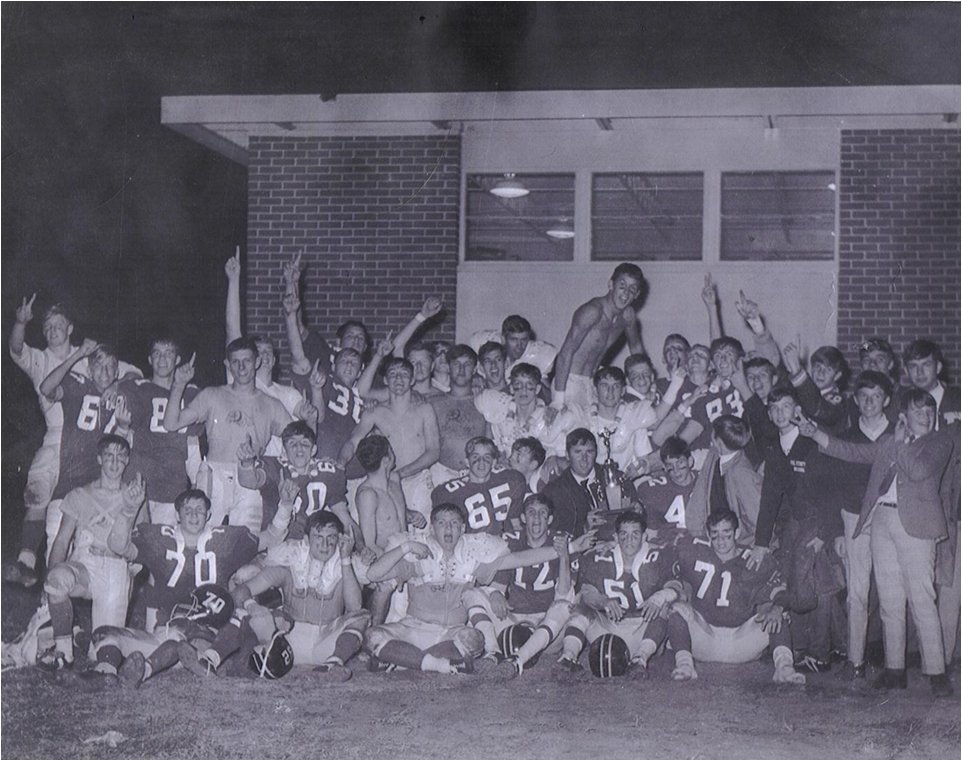 “If memory serves me right …”

Randy Walls, the junior quarterback for the Pike County High School Bulldogs 1969 Lions Bowl team, is not a fisherman at heart. If he were, he would have stretch out a tale to end all tales about the 30-27 win over the Headland Rams on that cold November night in the Wiregrass.

“That was 40-something years ago and it’s hard to remember,” Walls said, laughing. “I don’t want to say something that might not be exactly right. I do remember throwing a touchdown pass on our first play of the game and I remember we won and how excited we were … and it was cold, real cold.”

As for a play-by-play commentary, Walls said he couldn’t do that But he knew Coach Bob Booth would remember and he remembers Coach Booth.

And, with almost certainty, all members of the PCHS Bulldogs 1969 Lions Bowl team will remember the game and the coach the led them into Headland’s Yarborough Stadium.

When Booth took the helm, things began to change.

“It wasn’t me,” Booth said. “It was the players and their parents that turned things around. When we opened the 1968 season, we only had about three, no more than five seniors. We were doing things different from what they had been doing and some of the players couldn’t take it. I don’t think we won more than one or two games but we were playing Opp and Troy, a lot of good folks.”

The next year, things began to turn around for Booth and the Bulldogs. They began to learn how it feels to win and it was a good feeling.

“I give credit to the kids that stuck with it,” Booth said. “When you work as hard as we worked and there’s no ‘Rah, Rah!’ for the effort, it’s hard to keep working hard but they did. And, their parents were right there to support them. I still have the highest regard for those players and their parents. They are good people.”

All of the hard work paid off with an invitation to play in the 1969 Lions Bowl.

“Back then, there weren’t playoffs to the extent we have now,” Booth said. “It was an honor for the players and the school to be invited to the Lions Bowl, which was the oldest high school bowl game in the state.”

Booth said the Lions Bowl in Headland was a big thing.

“They had big parade and a Lions Bowl Queen–that was from Headland,” he said. “They had an event for the coaches and press the night before the game. We had a good time and were excited to be playing in a bowl game. It was big for the players, the parents, the school and Brundidge.”

At game time, the Bulldogs were growling-ready. But less than a minute after kick-off, they were tucking their tails.

“The Rams took the opening kickoff and ran it back for a touchdown,” Booth said. “Headland had 7 points on the scoreboard before the lights got warmed up.”

The Bulldogs could have licked their wounds and given up. But, with the luxury of three weeks to prepare for the game, Booth had added a little razzle-dazzle to the Dawgs’ playbook.

So, down 7 points with hardly a minute gone in the game, Booth decided to call the razzle-dazzle play the Bulldogs had worked on 10 times a day for three weeks.

“On our first play from scrimmage, quarterback Randy Walls faked deep into the line, pulled the ball out, dropped back and hit Kenneth Connell on a Z-out route. Kenneth was as wide open as a barn gate. The thing that made that play work was the blocking of the offensive line. They had to hold their blocks a long time and they did it just like we had practiced it all those time.”

Perhaps, it’s a bit odd that neither Walls nor Booth remembers the drama of the game. They’re not sure if the score rocked back and forth or if the Bulldogs got ahead and forced the Rams to play catch up or if the Bulldog’s came scratching from behind to take the win.

Perhaps that story will be told on Saturday, September 16 when the 1969 Lions Bowl Champions gather for a reunion dinner at Troy University’s Hall of Honor building on the university campus. A reception will be at 5 p.m. with the dinner to follow at 6 p.m.

All PCHS team members and managers, cheerleaders, majorettes, color guard and Pep Club members and others who support the Bulldogs are invited to attend.

Tickets are $25 each and include the buffet dinner. Make checks available to Paul Butler, 2643 Aimee Drive, Montgomery, AL 36106. Those interested in touring the new PCHS Field house may call or text Ronnie Ingram at 334-0590-2232 for information.