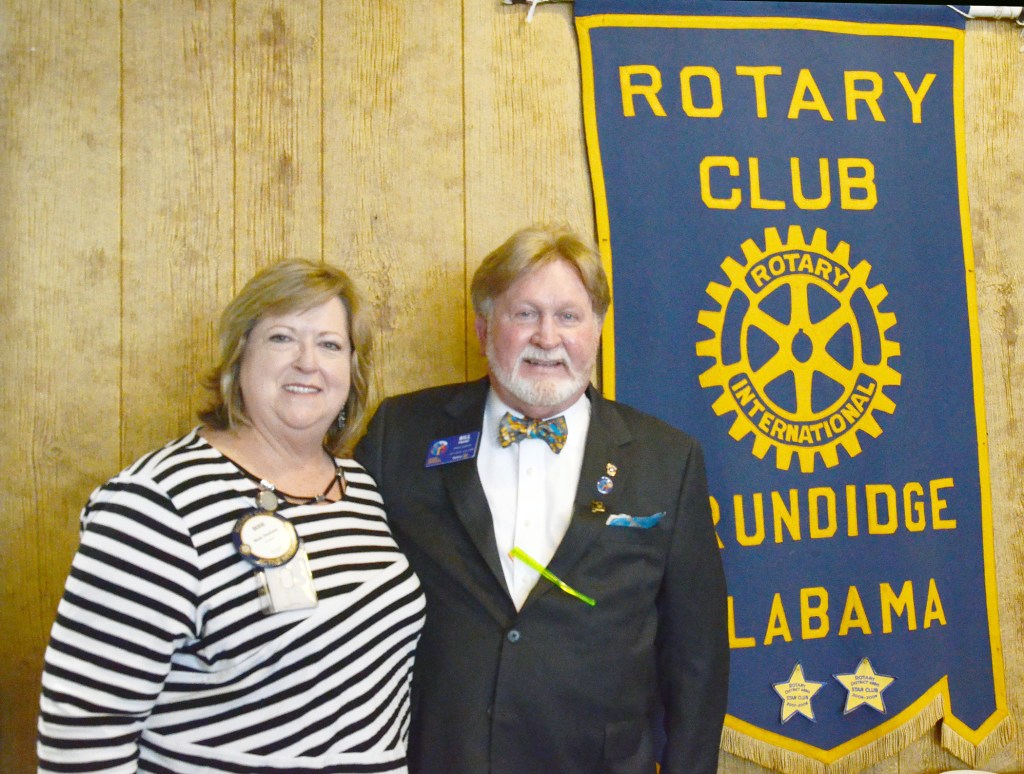 With his “tacky red socks and his happy glasses,” Rotary District Governor Bill Trant quickly caught the attention of the Brundidge Rotarians Wednesday. Rant was the program guest at the Brundidge Rotary Club’s lunch meeting and just as quickly let them know that he could say, “Roll Tide,” “War Eagle” and “Go Troy” and mean every word.

As District Governor, Trant will visit every Rotary Club in his 51-club district and, to do so is an honor, he said as each club is making a difference in its community, its country and around the world.

“Rotary is making a difference in Texas and Louisiana right now as we respond to the needs there,” he said. He illustrated the value of what is done in times of natural disasters and other crisis situations with a story.

“A man was walking a long a beach and picked up a jellyfish and tossed it back into the water,” he said. “Another man was watching and asked why he was throwing one jelly fish back into the ocean when there were hundreds dying on the beach. ‘What does it matter?’ “It matters to this one,’ was the reply.”

Trant said Rotarians are making a difference in many ways and, if only in one way, it matters.

Rotarians are being challenged to make their clubs attractive in such a way that their memberships will grow. Each Rotarian is asked to plant a tree as a way of refurbishing the landscape and letting the club’s presence be visible.

“Being a member of Rotary is a way to connect with people and build friendships,” Trant said. “Being a Rotarian is an opportunity for personal growth and an opportunity to make your community a better place. Rotarians learn from each other and work together, and together, make an impact around the world.”

Trant cited Rotary International’s efforts to eradicate polio. “Today, there are only eight cases of polio in the world,” he said. “Rotary helped make history. Rotary is often the first to ‘get on’ in times of need and the last to ‘get off.’”

There are many countries in the world where the people are in great need and Rotarians are responding to those needs in order to give them a chance to improve their lives.

“There are two kinds of people in the world, givers and takers. Rotarians are givers,” Trant said.