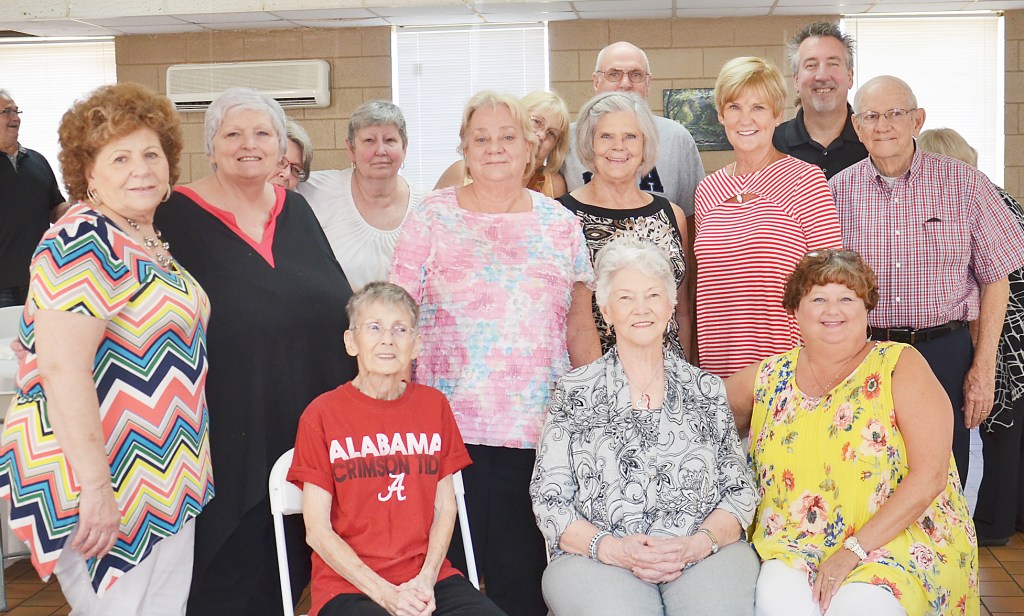 Even if the Publishers Clearing House van had pulled up to Betty Minton’s house and Ed McMahon had rung her doorbell, that would not have even begun to compare to her Sunday afternoon on September 24, 2017.

Minton celebrated her 80th birthday at the Colley Senior Complex with family and friends, 109 in all.

“There is nothing that could ever take the place of this,” Minton said, with her trademark smile and twinkle in her eyes. “This is the best birthday ever. I’ve never been this happy.”

Not even on the 50-yard line at Bryant-Denny Stadium with the Tide riding high over the Tennessee Volunteers?

“Not even that,” she said, as she hugged one and then another of her Golden Flake friends. Minton worked for Golden Flake in Birmingham for 33 years before retiring and moving to Troy.

Twelve of her co-workers from those “Golden” days traveled from the Magic City to spend Minton’s birthday with her and to also share memories of their days at Golden Flake.

“Way back then, I was looking for a job in the city and someone told me they were hiring at Golden Flake,” Minton said. “I had to wait several hours for the interview but I got the job. On my first day, I was peeling potatoes and dropped the knife in the conveyor belt and they had to shut down the line. My boss was a gruff man and I thought for sure that I would be fired, but he was also a good man and let me stay.”

Minton said the employees at Golden Flake were given the opportunity to bid for jobs and, when she had the opportunity, she bid for a packer’s position and got it.

“Packing is hard work and I finally worked my way up to cracklin’s,” she said, laughing. “Cracklin’s are lighter and not as heavy.”

While at Golden Flake, Minton’s love of football and her dedication to the Crimson Tide were solidified.

“I’ve always loved college football, especially Alabama football,” she said. “Back then Coach Bear Bryant was on television previewing and reviewing every week’s game and drinking Coca-Cola and eating Golden Flake potato chips. I was proud to be a Golden Flake girl.”

Minton was and is an avid Alabama football fan. When she was working at Golden Flake, she and three girlfriends went to all the home games and many of the away games.

“We went everywhere we could possibly go,” she said. “We followed the Tide to Hawaii and what a good time we had out there.” She didn’t share the details.

Even though she was a Golden Flake girl, Minton never got to meet “the Bear.”

“Oh, I wish I had but I got to see my so many of my favorite players play, Kenny “Snake” Stabler and Joe Willie,” just so many of them,” she said. “There’s nothing better than Saturday afternoon and being in a college football stadium… except my 80th birthday.”

Minton said there is no way to describe the happiness of having family and friends to celebrate her milestone birthday with her.

“I’ve had a lot of other birthdays, 79 to be exact, but this one has been so special,” she said. “I don’t know when I have looked so forward to anything. As you get older, things just seem to mean more and there is nothing that means more than family and friends … and football.  I love them all.”