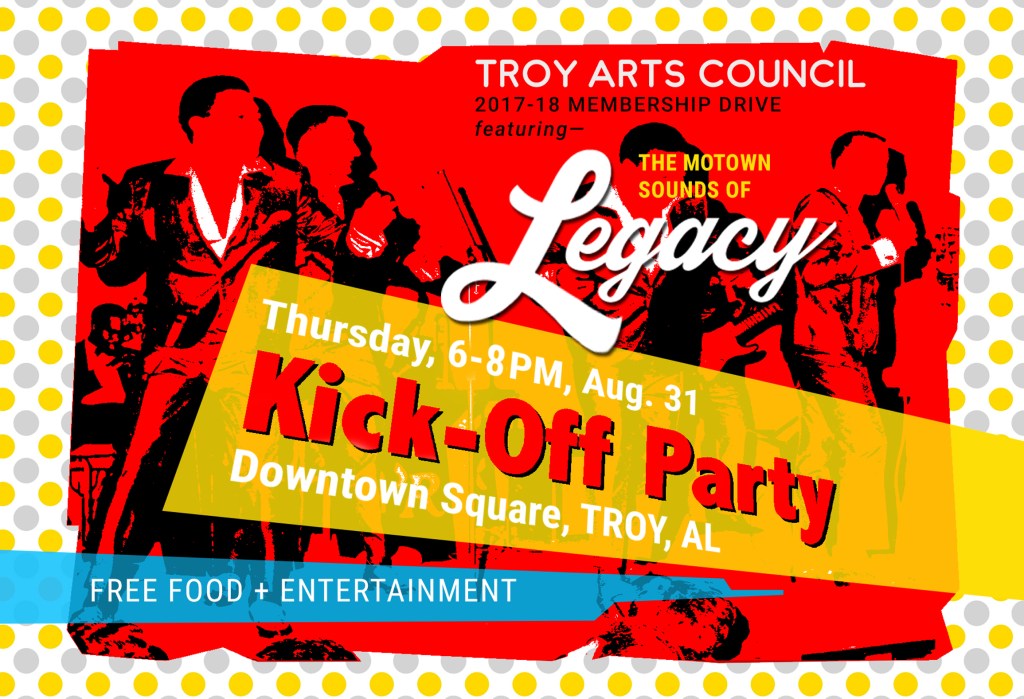 What better way to throw a Kick-off Party than with Motown sounds downtown.

And that’s exactly the way the Troy Arts Council will kickoff its 2017-2018 membership drive, with the Motown Sounds of Legacy from 6 until 8 p.m. Thursday on the downtown square in Troy.

The TAC’s Kick-Off Party will officially kick off its 2017-2018 membership drive and everyone is invited, said TAC President Joel Williams.

“We want everyone to come out and enjoy Legacy, a Motown tribute band from Dothan,” Williams said. “They have been playing together since 2009 and are well-known in a 150-mile radius of Dothan. The band has an old school rhythm and blues flavor. They capture that music from the 1970s and 1980s. Legacy has that kind of feel and that kind of style.”

The Troy Arts Council is well known for bringing high quality, year around entertainment to Troy.

“The Kick-Off Party is an opportunity for the community to come out, enjoy great music and learn more about the Troy Arts Council and its upcoming entertainment season,” Williams said. “We’ll have information about the entertainment calendar for 2017-2018 and membership opportunities will be available that include season tickets at different levels.”

Williams said membership in the TAC is about more than tickets to performances by nationally and internationally acclaimed artist.

“When you become a member of the TAC you not only have the best ticket in the house for a season of incredible arts entertainment, you also support the arts throughout Pike County,” he said. “The TAC supports that arts in various ways including school residency programs and school performances by visiting artists. The TAC also awards scholarships to students and scholarships and grants to art and music teachers in the county. So, membership in the TAC is not just buying tickets; it’s also supporting the arts.”

Williams said this year’s entertainment calendar will feature everything from chamber music to country music composers. The “Heart Behind the Music” event was such a great success, it will back again this year, as will Shelia Jackson’s Christmas concert.

Other performances on the TAC’s calendar include guitarist Michael Kelsey in concert, The Rose Ensemble: The Life and Legacy of St. Francis of Assisi, pianist Dr. Robert Cowan, and Semi-Toned, an all-male choir from England.

“This year, our performances will be at several different venues,” Williams said. “The Claudia Crosby Theater is a wonderful venue but sometimes we get lost in there. We will have several events at small venues, including St. Martin of Tours Catholic Church and the Johnson Center for the Arts.”

Williams said brochures for the Troy Art Council’s 2017-2018-entertainment season will be available at the Kick-Off Party Thursday night.

The TAC has a large base of patrons and Williams said their continued support is greatly appreciated and new patrons are always welcome and appreciated.

“Membership supports the TAC programs and events so our membership is vital to tour programming,” Williams said. “So, we invite everyone to downtown Troy from 6 to 8 p.m. Thursday. The TAC Membership Kick-Off Party Thursday will be a time of fun, fellowship and great music. Those who feel like dancing are encouraged to do so.

Restaurants around the square will be open and each will have downtown/Motown special eats. Sophie’s will have root beer floats; Momma Goldberg’s special will be Cuban sandwiches and B. Graves will have chicken & waffles.

Sips on the Square’s special eats will be BBQ chicken pizza; Flo’s will feature Philly cheese-steak sandwiches; and Dolce’s special will be coffee gelato.