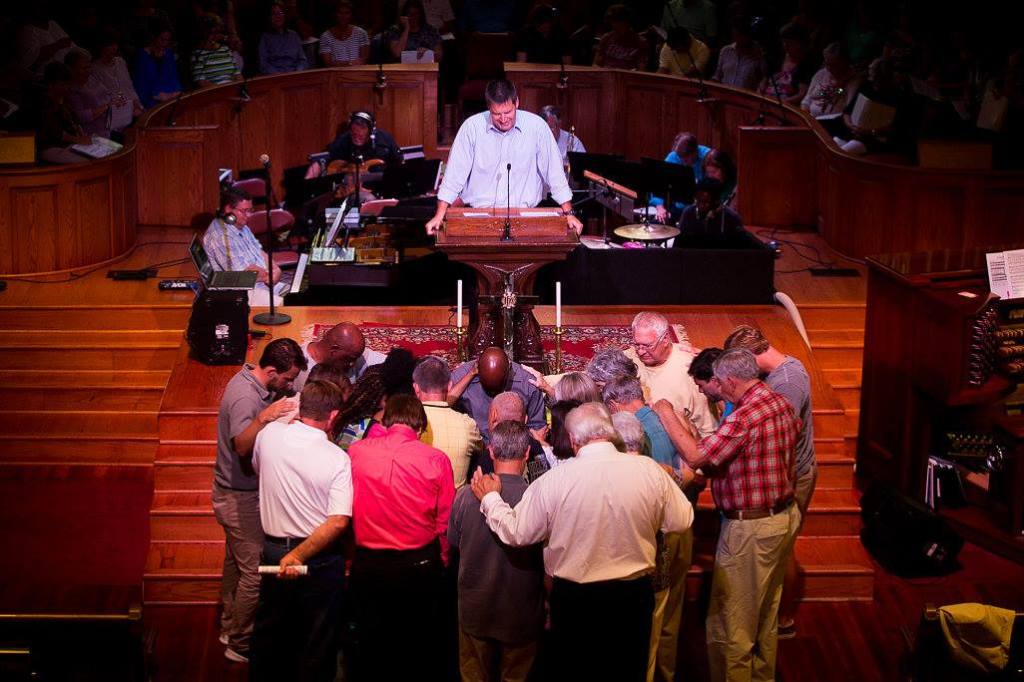 FBC Pastor Luke Lane leads a group in prayer at the first “CommUNITY series.” Lane said God moved him to start the series to call for unity across all spectrums. The last planned sermon will be Monday, August 28 at 6 p.m.

This Monday’s “CommUNITY” sermon at First Baptist Church (FBC) was planned to be the last, but Pastor Luke Lane said the series has gotten so much momentum that it will continue in some form.

“After the second one, God impressed upon me that I need to bring it to attention of those coming about what the next step will be,” Lane said.

Lane says God moved him to hold the series on unity about six months ago and it evolved into a community-wide message.

“It started out focused on FBC, but God impressed upon me that it needed to be directed at the whole church body in Pike County,” Lane said. “So I invited all the churches in the city and county and it changed to a community series based on unity around the gospel of Jesus Christ.”

The series began August 7 and guest speakers have been featured for each of the past three Mondays. Lane said suggestions will be taken Monday on what the next step should be.

“We’ve already gotten some suggestions,” Lane said. “One is that we should have some type of unity gathering and another is to have a community-wide prayer service.”

The series began shortly before an attack on a crowd of protestors at a white nationalist rally in Charlottesville that has heightened tensions across the country.

Lane said the focus of the sermon series wasn’t necessarily on unity between different races, but across all boundaries.

“Obviously we can do a lot more together than apart.” Lane said. “God is pleased when His body is united. It would be great if barriers were broken down between ethnicities and people in general.”

David “Doc “ Kirby, pastor at Pine Level United Methodist Church, applauded the series for bringing together people of different backgrounds, including bringing in churches from other denominations.

“One of the great joys for me has been getting to go on short-term musical mission trips,” Kirby said. “When you meet Christians from other countries, you have all kinds of people from all kinds of places all worshipping the same lord and savior, just with different styles. That’s what really thrilled me about last three nights; I’ve seen that joyfulness and reaching across barriers to really be a community not defined by way we look or where we live, but by membership in the family of God.

“In a time when so much of the country seems to be fighting against itself, they’re doing something so intentional to bring together the community here and trying to involve lots of different elements from the community.”

Dr. Phil Waldrep of Decatur will be speaking at the service at 6 p.m. Monday, August 28 in the sanctuary of First Baptist Church.