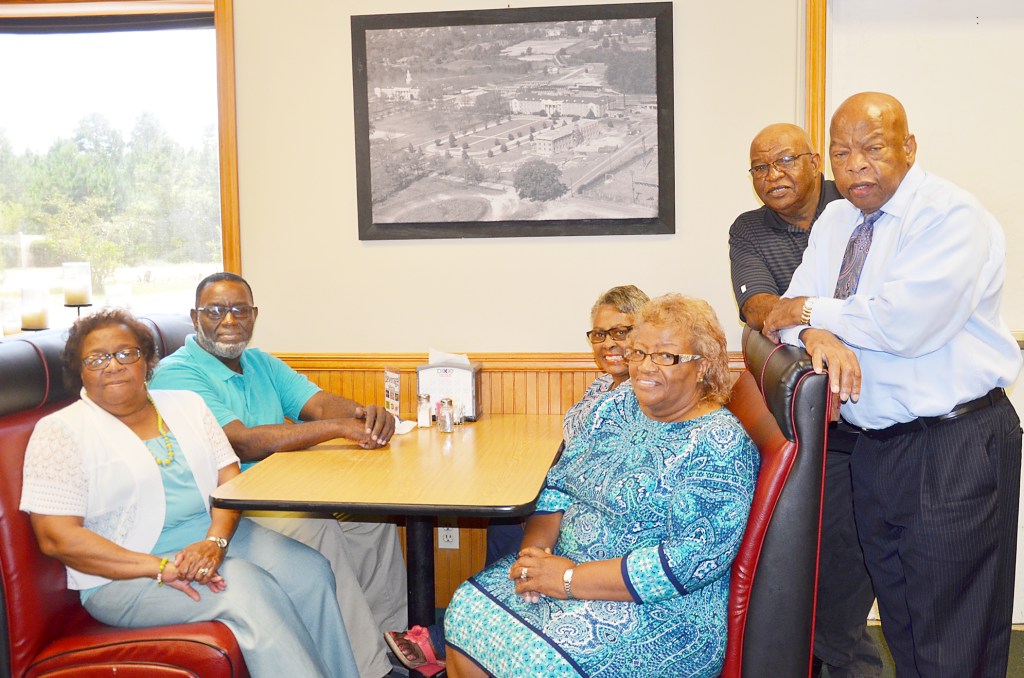 For Georgia Congressman John Lewis, coming home to Pike County is an opportunity to forget about politics and get away from the rigors of public life for a time while basking in the loving warmth of family and friends.

Lewis is the U.S. Representative for Georgia’s 5th Congressional District and a prominent civil rights leader.

Lewis was back in Pike County Tuesday and, for him, it’s a comfortable place to be.

He had lunch with family members at Julia’s Restaurant and took time to reflect on his early years growing up on a farm in rural Pike County and without having to talk politics.

“The Copeland family owned all that land where I grew up. My daddy, who was a sharecropper, paid $300 for 110 acres of that land,” Lewis said. “My family still owns that property today. We were poor, hard working people. We planted peanuts, cotton, corn and sugar cane and we raised chickens.”

The word chickens brought a smile to Lewis’ face.

“When I was growing up, I wanted to be a preacher,” he said. “I didn’t have anywhere to preach so would go out in the chicken yard and preach to the chickens. They were my congregation.”

Lewis laughingly said the chickens were attentive for about half his sermon.

“I went to a feed store here in Troy to buy a male turkey and a female turkey,” he said. “I was told to pick a big one and a little one. I did and raised them in a box in the back of the house. I was successful at that. I soon had 30 turkeys.”

Raising a congregation of chickens and turkeys was the fun part of farm work for Lewis. Picking cotton, hoeing peanuts, pulling corn and stripping sugar cane was the hard part.

“My mother would say to me, ‘Pick up. You’re falling behind. Hard work is good for you.’ But I thought hard work was about to kill me.”

When he was 11 years old, Lewis had a chance to go to Buffalo, New York, thanks to his “Uncle Otis.”

“I was in sixth grade and I had never been on a elevator or an escalator or seen anything outside of Pike County,” he said. “I had never been anywhere except the fields and never done anything except work. Going to Buffalo opened my eyes to the world around me. It made we work harder and study more.”

Lewis worked hard because he knew hard work and a good education would provide him with opportunities to “make something” of himself. He attended elementary school at Banks and high school at Pike County Training School in Brundidge. When he finished high school, he applied to Troy State College but never heard a word. So, he packed a footlocker with everything he owned and pocketed the $100 his uncle had given him and boarded the train for Nashville where he planned to attend seminary.

Lewis had written a letter to Dr. Martin Luther King, Jr., who was one of the driving forces in the civil rights movement about his attempt to enroll in the local college. King sent Lewis a Greyhound bus ticket and made arrangements to meet him in Montgomery.

When Lewis arrived, the Rev. Ralph Abernathy was standing there with King who asked Lewis, “Are you the boy from Troy?”

He returned to Nashville and graduated from American Baptist Theological Seminary with a bachelor’s degree in 1961 and from Fisk University in 1967. At Fisk University he helped organize sit-in demonstrations at segregated lunch counters in Nashville and volunteered to participate in the Freedom rides that challenged segregation at interstate bus terminals across the South. He was one of the Big Six leaders of the Civil Rights Movement and an architect of and a keystone speaker at the historic March on Washington. He played a prominent role in the Selma to Montgomery marches.

Lewis said he has lived his life based on the sermons he preached to his congregation in the chicken yard.

“I told the chickens to have patience,” he said. “I told them to work hard and never give up on anything or anybody. I told them to believe in themselves and to love one another.”

Lewis said coming come to Pike County is like coming home to a pocket of friends who have heard that same sermon many times over the years and, unlike the chickens, have said, “amen” to that.