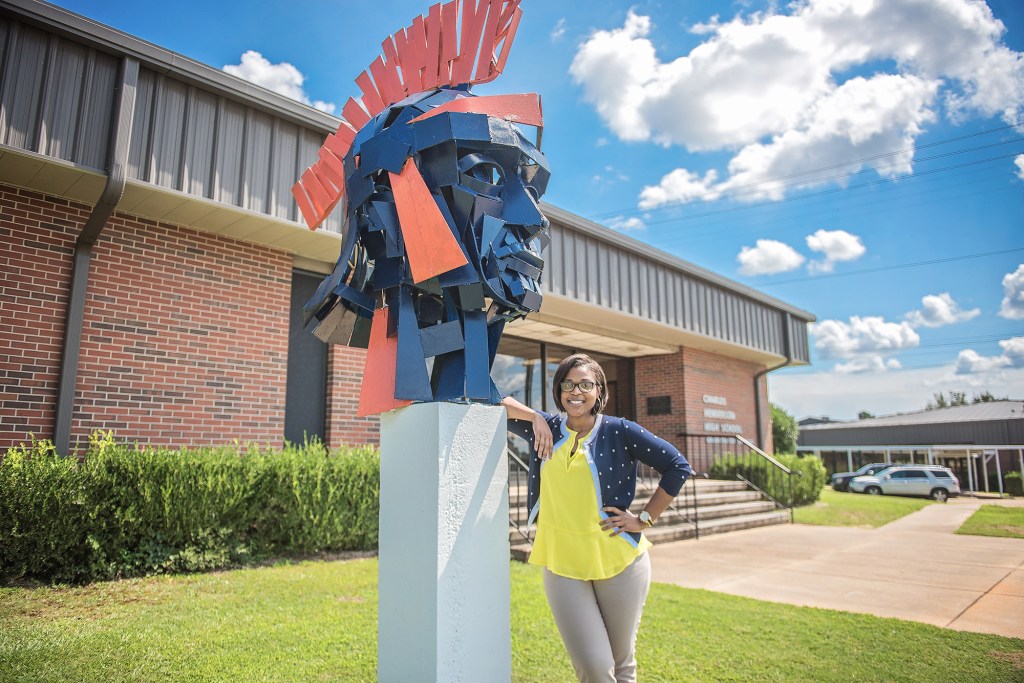 Messenger photo/Jonah enfinger Kristina Anderson, newest assistant principal at Charles Henderson High School, said her passion is to change students’ lives by building a rapport with them. Anderson started at the position shortly after school started earlier this month.

Kristina Anderson didn’t always want to be a teacher, but it’s the path she chose and she is now of the top administrators at Charles Henderson High School.

Anderson was hired to fill the position of assistant principal just as school returned to session.

“When I was a kid I did not know I wanted to be an educator,” Anderson said. “My parents told me I was going to Troy University and my first semester I majored in speech pathology. After my first semester, they cancelled the program and I didn’t know what I was going to do. So I called my mom and she told me ‘I want you to be a teacher.’ So I did it and it just so happened that it’s something I’m good at.”

Anderson went on to get her B.S. in elementary education at Troy as well as a Master’s degree in special education before earning a Master’s in leadership at Auburn University at Montgomery.

Although she got her most recent degree in Montgomery, Anderson never left Troy and has made a life here with a “plethora of friends that have become family.”

She began her career as an intern at Banks School before becoming head teacher at Pike County Elementary School, where she has taught for the last eight years.

“This has become a new home for me, “ Anderson said. “I’m vested now.”

This is Anderson’s first time as a principal, but she said not that much has changed since she was a teacher.

“My passion is there,” Anderson said. “It’s not much of a change. Instead of one classroom, I have a whole school that I view as my classroom.”

While some teachers may simply aspire to stay in the classroom setting, Anderson said she’s wanted to eventually become an administrator since she began studying to be in the education field.

“I knew administration was the way I wanted to go,” Anderson said. “Even at PCES, I was on the implementation teams, I led fundraising.

“What drives me is the fact that I can change lives daily. God had put more in me. I’ll come up with ideas in the middle of the night and write them down and go back to sleep. I just have this burning desire to, every day, be changing somebody’s life. We have the power to change the way people feel about themselves and others. in today’s culture, we need that.”

One of the major ways Anderson said she goes about effecting that change is by building rapport, not just with students, but with faculty and staff as well.

“I think it’s important,” Anderson said. “People are more inclined to work harder for someone they have a rapport with. I always see Principal (Brock) Kelley and (Shelby) Tuck shaking hands.

“The kids we teach already have so much to deal with at home. We can change their day; change their whole outlook with a simple ‘hello.’ It’s important to touch the lives of children, so that they know the importance of education and of loving thy neighbor.”

In her day-to-day activities so far, Anderson said she is a “motivator, a counselor and a mom.”

“I’m a little bit of everything,” Anderson said. “It’s great to have someone that somebody really values my opinion, that somebody is wanting my guidance.”