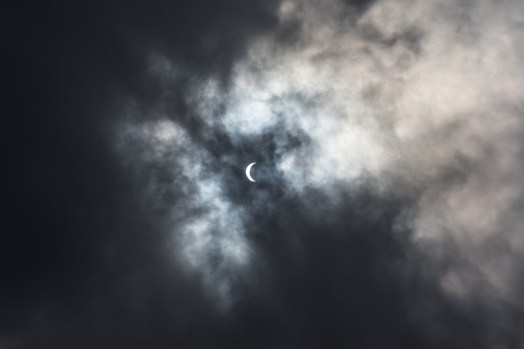 Millions of Americans gathered across the country for the Great American Eclipse, and Pike County residents were no exception. Clouds obscured the eclipse at its peak, but residents still got a chance to see a near-total eclipse minutes before clouds enveloped it (above) 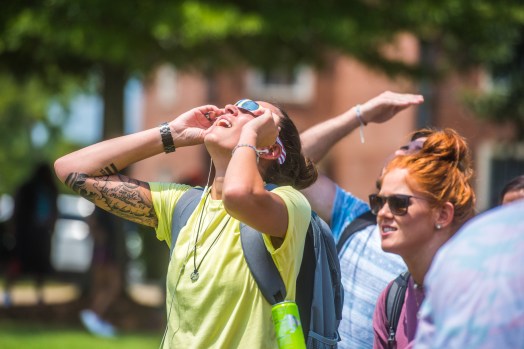 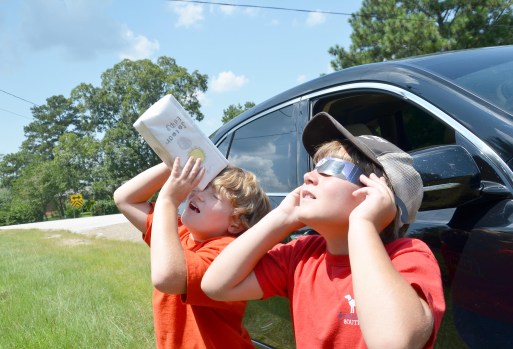 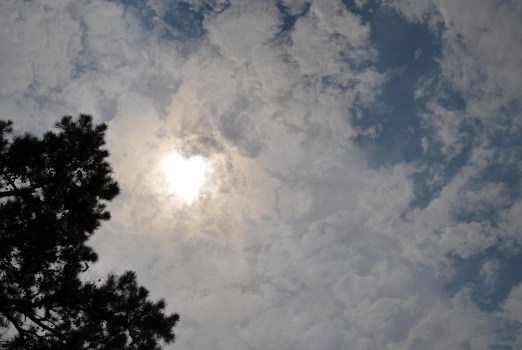 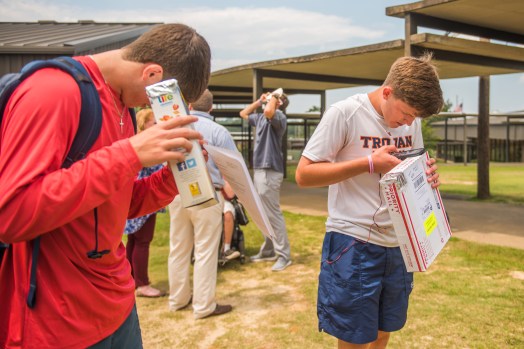 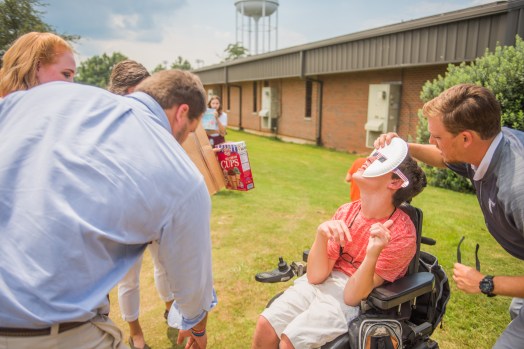 As the moon slowly blocked out the majority of the sun Monday, the sky over Troy grew dim. Unfortunately for residents hoping to view the Great American Eclipse, the darkness was mostly due to clouds moving in, shrouding the peak of the phenomenon.

Still, many excited students gathered on the Troy University campus for the event saw enough of the eclipse to be satisfied – the sun was still peeking through the clouds about 5 to 10 minutes before the eclipse was predicted to peak.

Millions of Americans gazed in wonder at the cosmic spectacle, with the best seats along the so-called path of totality that raced 2,600 miles (4,200 kilometers) across the continent from Oregon to South Carolina.

The Troy University Physics Club had brought 100 certified eclipse glasses to pass out to interested students, which turned out to be far too few.

“We completely underestimated how many people would show up,” said Govind Menon, head of the science and technology department at Troy. “There are at least 500 people here, maybe 1,000.”

Many of the students and faculty had been there since noon and were lounging all across the quad, talking amongst themselves as they waited to catch a glimpse of the rare occurrence.

Matt Barker said he was excited, but had already witnessed one solar eclipse in Kansas in 1994, so this wasn’t a new experience for him.

At approximately 1:05 p.m., students around the quad could be heard reacting to what they were seeing, taking turns looking through the glasses.

“Okay, that’s pretty cool, I have to give you that,” said one woman standing near the group, who had said she wasn’t as excited to see it as some of her friends.

Alex Harrington, a senior marine biology major, enjoyed looking through the glasses as well, but got some extra time experiencing the eclipse through his homemade pinhole camera, a simple cardboard box used to capture the phenomenon.

“I made this as a failsafe,” Harrington said. “It took literally like a minute to make.”

“It took about three minutes to make,” said Hayden Roberts.

Roberts said the experience was one of the best of her life.

“I thought it was almost better than going to New York,” Roberts said. “It’s definitely something that I’m going to try to do again.”

Roberts said the projection of the moon’s shadow in the box looked like a “crescent roll,” But Holly Hughes said she never saw it at all.

“I could see the clouds, but I couldn’t find the sun,” Hughes said. “I did get to see it with glasses though.

“It wasn’t really worth the hype,” said MaKayla Culpepper, a junior documenting the event for the school. “Totality would’ve been cool.

In addition to the sight, students said the sky definitely got dimmer, and the temperature may have gotten a bit cooler, but the most noticeable change was the bugs – mosquitoes and gnats bombarded the students as they attempted to witness the event.

Walden explained that animals and bugs use the sun as their internal clock and changes in that predictable pattern can confuse their actions.

Menon said he hopes that interest in astronomy and observing the sky can turn the community’s interest more and more to science.

It was, by all accounts, the most-observed and most-photographed eclipse in history, documented by satellites and high-altitude balloons and watched on Earth through telescopes, cameras and cardboard-frame protective eyeglasses.

The next solar eclipse that will be visible in the United States will be in 2024.