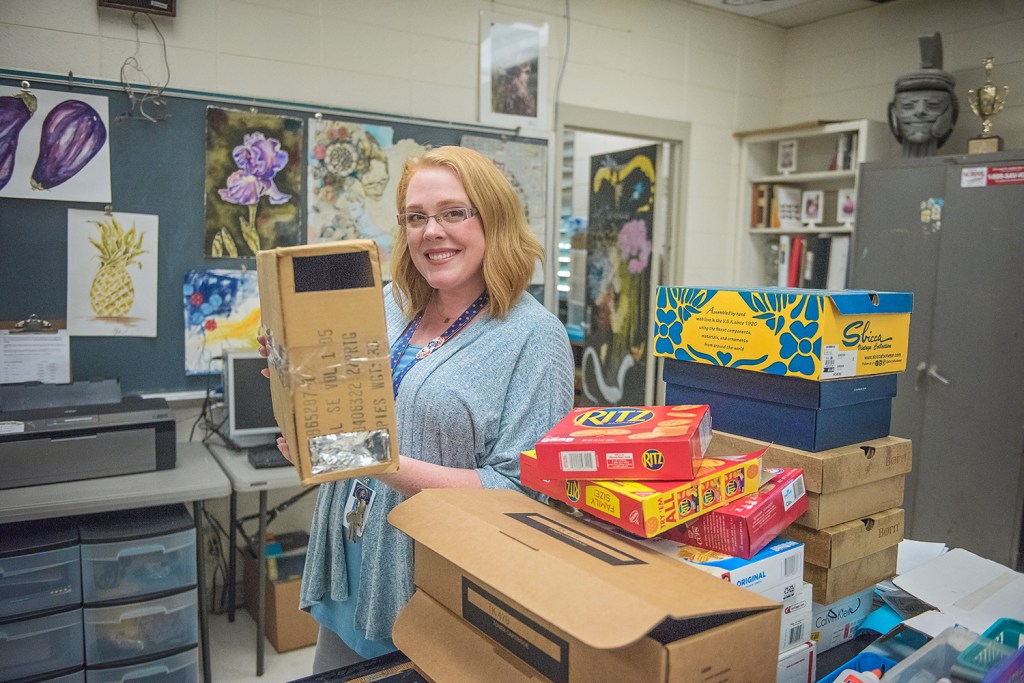 People around Pike County are preparing for Monday’s solar eclipse, a phenomenon that hasn’t been seen in the U.S. since 1979. Pike County isn’t in the path of totality, but will get a near 90-percent blockage of the sun. Charlotte Walden, arts teacher at Charles Henderson High School has been grabbing every box she can find to build homemade pinhole cameras for students to view the eclipse without protective eyewear.

People around Pike County are gearing up for the partial solar eclipse that will pass over the area Monday afternoon. At local schools, the top priority is safety.

Pike County Schools (PCS) and Troy City Schools (TCS) officials are offering some special activities related to the eclipse (with parental permission) but are focused primarily on keeping students safe.

“I think every school in the system will have some instructional activities around the eclipse under the supervision of faculty following safety precautions,” said Dr. Mark Bazzell, PCS superintendent. “If not involved in those activities, students will be kept inside at that time. This is an excellent teaching opportunity for our faculty to use, we just want to make sure they’ve done it safely.”

The solar eclipse will be the first to cross the mainland of the United States in 38 years. Troy won’t get a total solar eclipse, but will see up to 88 percent of the sun blocked out by the moon at the eclipse’s peak. The moon will pas in front of the soon for approximately 3 hours between noon and 3 p.m. with the peak coming around 1 :30 p.m.

“Some teachers will use NASA-approved glasses to use it educationally for their classrooms,” Hicks said. “We’ll also have the NASA live-stream for classrooms that want to use it. We did adjust some lunch times to prevent students from being outside during that time.”

Pike Liberal Arts School (PLAS) headmaster Becky Baggett opted to let out for the second half of the school day to protect students.

“We talked with NASA and, not having enough eyewear for every student here… we felt it was in the best interest of our students to let out early,” Baggett said. “We try to always err on the side of caution for our students. We have to move from building to building, and with the eclipse being from 12:02 to 3:02, there’s no way we can get everyone in a building. (If the students were outside) somebody’s going to look up without proper eyewear.”

Mary Kate Moring, optometrist at Family Eye Center, said attempting to stare at the eclipse, even for a few seconds, could cause irreversible damage to the eye.

“You may notice if you stare at a light bulb then look away, you get this after-image,” Moring said. “There’s actually an eye condition called solar retinopathy or “eclipse” retinopathy disease in the macula, where you get your good center vision. It basically burns the retina and will cause an irreversible dazzling sensation in your center vision.”

Although the disease is sometimes called eclipse retinopathy, Moring said an eclipse isn’t any different than looking at the sun any other time, it just makes people more likely to stare at the sun. Moring said the damage could be done within seconds of staring.

William Allen, another local optometrist at Allen Optical Lab, said that regular sunglasses won’t do the trick for eye protection when looking directly at the sun.

“Regular glasses or sunglasses will not stop that damage,” Allen said. “Back in the old days, they used to take a piece of glass and smoke it black and look through that. That was actually dark enough. But now they have little inexpensive cardboard glasses with lenses inserted into the front. Those cheap little glasses will work but you can have a pair of $3,000 sunglasses that won’t protect you from direct sunlight.”

Moring said Family Eye Center recently purchased 500 of the special ISO-certified glasses for customers hoping to watch the eclipse. They sold out within the day and when the center called to get more, their supplier had sold out as well.

For residents that can’t get their hands on any of the certified glasses, there are other ways to view the eclipse.

Dr. Govind Menon, director of the Troy University Department of Science and Technology, said it is as easy as a quick Google search how to make a pinhole camera.

“If you don’t have certified glasses to view the eclipse, you can make a homemade pinhole camera, which you can find instructions on Google for easily,” Menon said.

That’s just what Charlotte Walden, arts teacher at Charles Henderson High School did this week when it occurred to her that the eclipse tied into art as well as science.

“I saw this box and I thought about pinhole photography and though how it ties into art and science,” Walden said. “So I can cover science as well as show how photography started. All these kids know is what they have.”

The devise is simple: a cardboard box one to two feet long, completely seald off from light except for two square holes on the viewing side. On the left, the square is covered with foil, except for a single pinhole in the center; the other hole is left uncovered. The students will view through the uncovered hole to the back of the box, which was covered in white paper for the pinhole projection to be viewed.

“”With this, they can really see how light projects and reflects,” Walden said.

Menon said the Troy physics club will be out on the university quad form noon to 2 p.m. with 100 eclipse glasses for students to view the phenomenon.

He explained what people here should expect to see with only 88 percent of the sun eclipsed instead of totality.

“It is almost as good as a total eclipse, but the real bang for the solar eclipse is the solar corona; when it covers it entirely you get to see the corona,” Menon said. “On the other hand, we’re very lucky for zero travel to see a 90 percent eclipse. We won’t have any total darkness; at best we might get the feeling of a cloudy day for a minute and half. I urge people to look at the shadows cast by trees. The gaps between the leaves act as pinhole camera and in the shadows you can see many projections of the crescent sun.”

More information can be found online about the solar eclipse including the path of totality. Another solar eclipse will come through the U.S. in 2024, starting in Texas and making it’s way north through New York.