ENDURING FRIENDSHIPS: Dogs and their people; people and their dogs 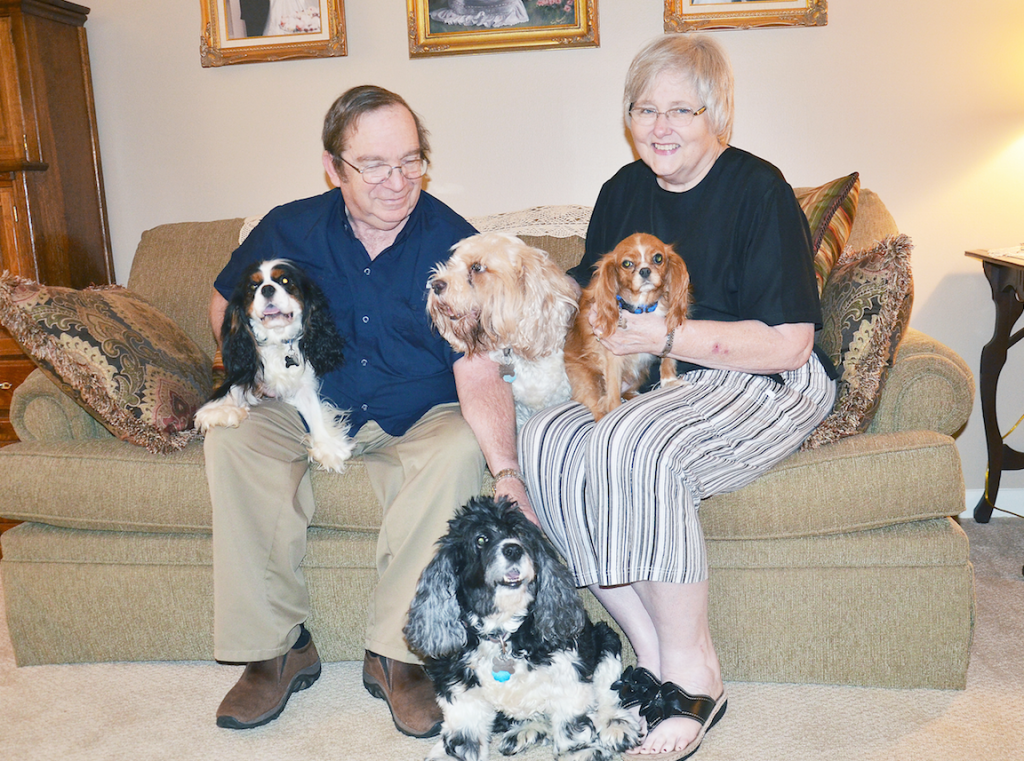 Charles and Barbara Synco of Troy have four dogs in their family. Three of the dogs are rescue dogs, including one that is a hospice adoption. The other was rehomed to the couple by a friend. The Syncos have a soft spot in their hearts for rescue dogs. Dogs around town say when they die, they want to come back as a Synco dog.Pictured with the Syncos, front and center Annabelle and from left, Atticus, Lucy and Ginger.

When Charles Synco gets home from a day of filling prescriptions at Synco Drugs, he looks around the house to see if there’s another mouth to feed.

On this one rainy day, he counted noses – “one, two, three ….” then nose number four appeared from around the corner – muddy nose, number four.

Charles Synco laughed as the four family members welcomed him home, just as they do every day. He then glanced around the room just to make sure nose number five was not waiting in the wings.

If the Troy pharmacist would be perfectly honest, he would probably welcome another member into the family with arms open just as wide as those of his wife, Barbara, and with just as much love.

Charles and Barbara Synco have a history of having dogs in the house. There were few times when the nest was empty but not for long.

Today, the Syncos have four dogs, all rescue dogs. They never shop for dogs. They always adopt.

“There are so many dogs that need a home and dogs have so much love to give,” Barbara said as she settled on the sofa and lifted Ginger onto her lap.

“Dogs love you when you’re in a bad mood, sad or lonely, even angry. They love you when you don’t think anybody else loves you,” she said, adding with a smile,  “and, they never ask to borrow the car.”

Barbara has always loved animals in general, “except cats,” she is allergic, and dogs specifically.

“Charles and I have a place in our hearts and in our home for rescue dogs,” she said, nodding to the four rescues resting comfortably between her and her husband as if to say

‘these four and no more.’ Our son and daughter and their families also have rescues. They make loving and devoted companions and bring so much joy to all our lives.”

For a short while, Charles and Barbara Synco were out of the dog business. Although they didn’t talk about it, they both missed the pitter-patter of little paws.

“We weren’t looking for Lucy and Lily but they found us,” Charles said.

A picture became a home-wanted poster for two pups that were alone and lonesome.

“We could tell that Lucy and Lily were dying to come home with us,” Barbara said, with a smile.

Lucy and Lily were adopted from rescue in 2010 and quickly became members of the Synco family. Lily died in January 2015, leaving Lucy sad and lonely.

“Lucy was pitiful,” Barbara said. “We began looking for a rescue for her … for us.”

At the time, there was no rescue group in Pike County. The Syncos found Annabelle, a cocker spaniel, at a rescue in the Florida Panhandle. Then, along came Ginger, a Cavalier King Charles spaniel.

“In the pictures of English royalty, there is usually a toy spaniel sitting at the king’s feet,” Barbara said. “King Charles loved the breed. They are wonderful lap dogs. Their one job in life is to sit on your lap and Ginger does it well.”

The Syncos saw Ginger’s picture on the website and fell in love with her. She came to the Syncos from a puppy mill in January 2017.

“Ginger was 19 months old and about 10 pounds worth of little dog,” Barbara said. “She had spent her entire life in a cage. Her sole purpose had been to produce puppies. She has malformed kidneys and, although she had been bred, she could not produce viable puppies, so she was sold at a puppy mill.”

Because Ginger had medical issues, the adoption was a hospice adoption.

“Ginger has stage four kidney disease and will need medical treatment all her life,” Barbara said. “We thought we might lose her in December and again in January but, thankfully, she’s still with us.”

The Syncos keep loving Ginger and she just keeps “lapping” it up.

For the Syncos, three’s company and four would be a crowd.

But when Charles and Barbara learned about a family in Troy that had more dogs than they needed, they agreed to rehome a tri-colored Cavalier King Charles spaniel name Atticus.

One king, two kings, what does it matter when a dog needs a home.

Atticus came to live with the Syncos in March and, if the need arises, Charles might come home and find another mouth to feed.

“It’s sad to see the large number of dogs in our shelters and it’s heartbreaking to know that there are so many abused, neglected and abandoned dogs,” Barbara said. “If you can’t take care of a dog, then don’t get one. They are living beings, not tractors.  Adopt a rescue dog and you will be the world to that dog.”