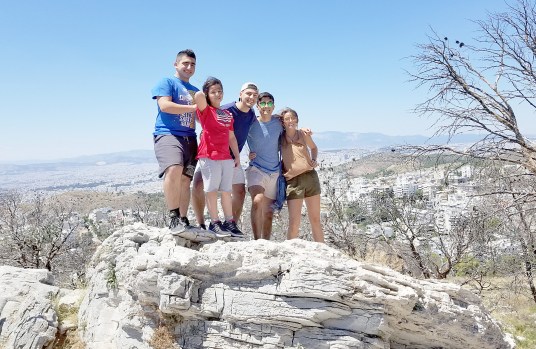 The Tempelis family took a three-week trip to Athens, Greece this summer to visit relatives in the country. Yanni Tempelis is originally from Greece and the trip gave his wife Denise and children Demitri, Niko and Kailee. Above: Dimitri, Niko and Kailee got to spend time with some of their cousins that reside in Greece. 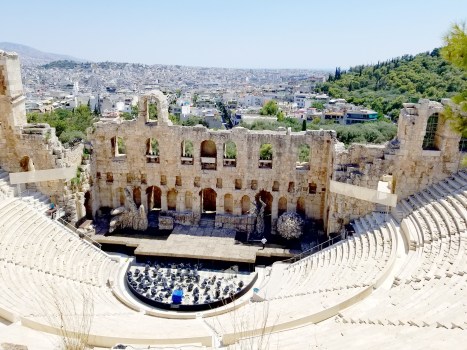 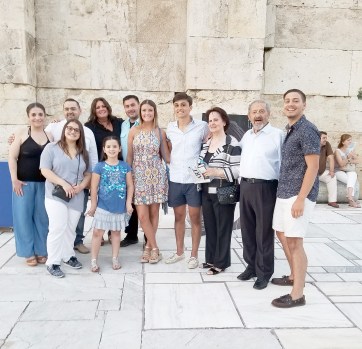 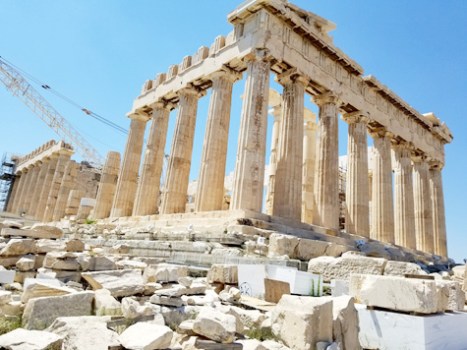 The atmosphere around the Yanni Tempelis family table was electric.

The talk was enthusiastic, with several talking at one time, one over the other and more interruptions than not. The laughter was contagious.

The Tempelis family recently retuned from a three-week “homecoming” in Athens, Greece and made no efforts to corral their unbridled excitement about the trip.

Yanni and Denise Tempelis and children, Dimitri Tempelis, Niko Tempelis and Kailee Taylor, eagerly shared their hundreds of photos and thoughtfully conveyed what the trip meant to them.

For Yanni, going to Greece was an opportunity to be back among family that is an ocean  away from his home in Troy.

Being back in Greece was a chance for Denise to get to know her husband’s family more closely and to experience the culture in which he grew up.

For Dimitri and Niko, it was their first trip back to Greece since 2008. So it was familiar and yet also new. And all new for Kailee — the people, the country and the customs.

To a one, they would have preferred to have stayed longer in the country which is billed as a lifetime dream vacation destination.

“When you consider that Greece is 6,500 miles away, then three weeks was not long enough,” Yanni said. “Denise and I visit my parents and siblings each year and I talk with my parents every week but it was good to be back where I grew up and spend time with them there. I have a large family, a very large family. There were so many people to visit aunts, uncles, cousins. Three weeks was not enough time.”

Yanni’s parents have a home in Athens and a summer home in the Imittos Mountains.

When Denise first visited Greece, most of her time was spent in the city. This trip, they made more time to be in the mountains. And, for her, that was like stepping back in time.

“Being there reminded me of the times I spent with my grandparents and I loved it.  We didn’t have air conditioning and the windows were always open,” she said. “We ate from the garden. There were no potato chips in the house.”

Denise said each night they had their meals on the balcony that overlooked the mountains. In the mornings, the kids had coffee on the patio.

“They fell in love with Greek coffee, but I didn’t,” she sail laughing. “We had a wonderful time, with the family all together. It is such a beautiful place to be.”

Most houses in Athens have outdoor kitchens with huge brick ovens, ovens big enough to feed a family of 20 and cook a lamb on a spit. The cooking of the lamb is normally an Easter tradition.

Dimitri, 18, had the opportunity to participate the cooking of the lamb, which is done by the father and the oldest son.

Dimitri shuddered at the remembrance  of putting the lamb on the spit for cooking.

“I had to shove the spit through its scull,” he said. “That was not easy to do.”

The Greeks are not wastefully people so every part of the lamb was eaten, down to the eyeballs.

“Dad’s put the lamb’s eyeballs aside and said, ‘these are for me,” Dimitri said and indicated that he did not challenge her for them.

Dimitari said Greece is cool. He loves the environment and his desire is to spend more time there.

“We hiked and climbed the mountains and that was fun,” he said. “And, the food, it was great. We had octopus and that different and good.  I liked hearing my dad tell about the history of Athens and about our family. I liked being there and with our family.”

Kailee was impressed by the kindnesses and love shown by Yanni’s family and was amazed at how many languages the family members spoke.

“A niece speaks four languages and she is only 10 years old,” Kailee said. “Hiking was one of the best things, just seeing how beautiful everything is and from up so high.”

The Tempelis family visited the popular tourist attractions, including the Parthenon, Acropolis in Athens, the Temple of Apollo, the Theater at Acropolis and Delphi.

The young people were fans of the beaches where Kailee liked to “hang out” and Niko preferred to “chill.” However, the remembrance of their three weeks in Greece will be more about family, about traditions and about the Greek culture.

Dimitri said he now has an even deeper appreciation of his heritage and closer ties to his family.

“I am proud of my Greek heritage,” he said. “I will definitely go back because it is a part of who I am.”

Niko, too, said at age, 15, this trip will be more meaningful and more memorable than when he visited Greece at age 6.

He and Dimitri said getting to see where their dad was born and grew up and to hear him talk about the history of Athens and seeing his pride in his homeland was special.

For the Tempelis family, the trip to Greece was all about family and they came home with the realization that Greek family values are so strong that elements of tradition and culture transcend generations.

Denise, laughingly, said they also came home a collective 40 pounds heavier. “And we did a lot of walking.” That, she said, is testament to great Greek food.