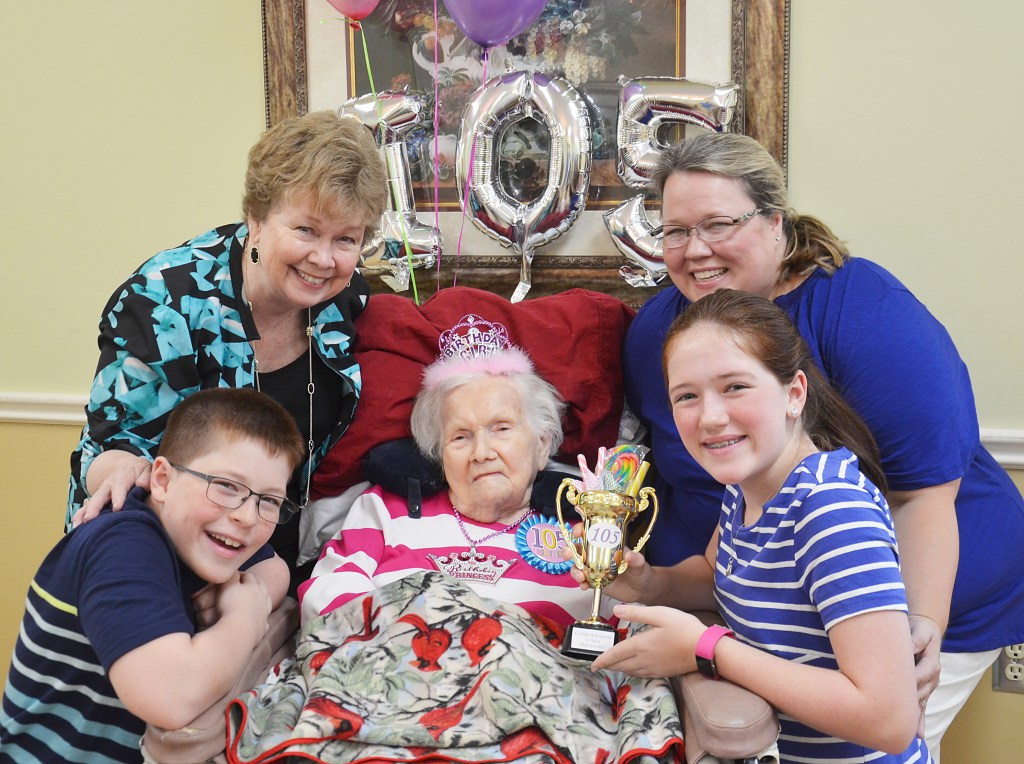 Velma Folmar Hightower reached a milestone Saturday that few people will ever reach. She celebrated her 105th birthday at the Luverne Health and Rehabilitation Center.

Hightower’s immediate family traveled from Texas to celebrate with her along with her family and friends from the Goshen area.

“Miss Velma” said turning 105 on Saturday, was not much different from turning 104, but expressed happiness at seeing her daughter, Charlotte Goeters, from Katy, Texas; granddaughter and her husband, Ashley and Kyle Jung; and great-grandchildren Jacob Jung and Avery Jung from Manvel, Texas.

“Once upon a time … ,” Goeters said with a smile as she hugged the “birthday princess, “there was a little girl in Goshen. That was a long, long time ago. More than a hundred years. Mother has had a long life and a good life and we are blessed to have had her so long.”

Velma Folmar was born in the Goshen area. She attended school in Goshen and was the valedictorian of her graduating class. Life for her was much like it was for all young people who grew up rural areas during the early 1900s.

They lived rather modest lives, doing “children’s work” on the farming. Their “going” was limited to church and school so just how it was that Velma Folmar met a dashing young man, Louis Hightower, is a bit of a mystery, her daughter said.
“I don’t know what kind of work my dad did back then,” Goeters said. “I just know that he ‘climbed poles.’ From everything I’ve heard, the young women ‘tipped’ their hats to him. I thought men tipped their hats to women, so I guess that meant that women noticed him. And, I guess he noticed my mother.”

The young couple lived in the Goshen area for a while but then moved to Birmingham.

“I guess the move was to find work or better paying work,” Goeters said. “I was born in Birmingham and grew up there. My dad owned a hardware store that he bought from his brother. Mother started working at the hardware when I was about 16 years old, so most all of my growing up years, she was at home.”

The couple moved back to Goshen in the early 1970 to be close to family. After the death of her husband, Velma Hightower moved to Troy and became a “can do lady.”

“There wasn’t anything that needed to be done that mother couldn’t do,” Goeters said. “She live on Bruce Street and attended Park Memorial United Methodist Church. She loved to play bridge and Canasta. I had a chance to play Canasta with her and her lady friends once and I don’t know when I’ve had more fun.”

Goeters said her mother has always taken care of herself physically. As a redhead, she either stayed out of the sun or kept a hat on her head.

“And she has a wonderful sense of humor,’ Goeters said. “She’s a teaser. She has always had a bright outlook on life. It has kept her young 105 years. She is a very special lady and we love her very much.”