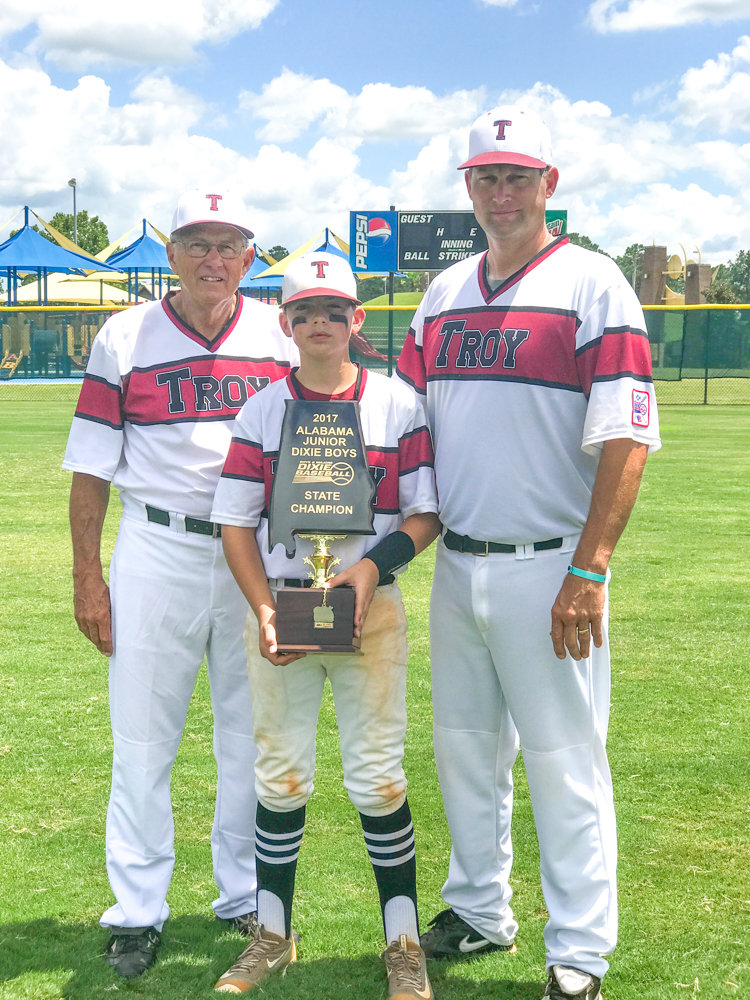 Herb Huner was on the very first Little League team Troy fielded when he was a boy back in the early 1950s, he was a four-sport athlete in college, and he coached all three of his sons – Jeff, Chris and Mike – in the 1980s. But it is the opportunity to now serve as an assistant coach for his grandson’s team that may be what the entire Huner family is most proud of today.

Huner, 74, is as an assistant coach alongside assistant Josh Prestwood for the Troy Jr. Dixie Boys 13-year-olds, a team managed by Huner’s middle son Chris, now 46.

Next week, the Dixie Boys travel to Bluffton, South Carolina for the World Series, and three generations of Huner’s will all wear the name of Troy upon their chest.

Chris believes the team has gotten to where it has because of the great depth of talent of the 13-year-old baseball players, but also the input and knowledge of his coaching staff.

“A head coach can’t do it all by himself,” said Chris, “A coach has got to surround himself with good people and have more sets of eyes. From my standpoint, a successful team is not a dictatorship. You should get input from other coaches. Josh is real knowledgeable in situations, and has a keen eye for picking up a lot of little things. He is a gamer and it has rubbed off on his son Noah.
“It’s very satisfying as a coach, and as a son, to have him (Herb Huner) involved. Family is very important to us. If we are not at the ballfield we are probably at another game. We go to a lot of games and athletic events, and we spend a lot of time together. It is a good quality place to be, and a great place to raise your kids, around a ballpark.”

From the time he was 5 or 6 until he was 71, Herb Huner has played baseball, basketball, football, and up until his open-heart surgery three years ago, Senior Adult Softball, on the national tournament level. Today Herb scouts other teams Troy may play, with scorebook and No. 2 pencil in hand, looking for anything that could assist Troy in coming away with a win.

“It’s thrilling to me to be back in coaching,” said Herb. “I feel blessed that my health has been so that I can get out and enjoy the sport this long. I had bypass heart surgery three years ago, and I think I am back to where I was, before the surgery. I’ve really been blessed. My interest now is in watching these boys and trying to help them. I’ve had my turn to play, and I’ve enjoyed it.”

Herb began coaching his son Jeff at Knox Street, then Chris, then Mike. The Huner’s did not always go home with a win.

“He (Herb) probably coached about 20 years when all was said and done,” said Chris. “He will tell you he was not successful a lot of years. When he coached Dixie Youth there was not a run-rule, and he coached the Mets. He equates it to the Bad News Bears. They would get beat 30-0 or 25-0. My mom (Ann) jokes that is why Dixie instills the run-rule today, because of Herb’s unfortunate teams.

“My dad came up coaching against some really good coaches in Erastus McWhorter, Terry Jinright, Boy Motes, Leroy Bryant and others. He was coaching against some very good coaches that were very successful, and that made them all better. He spent a lot of years in the recreation department and I am glad he is able to coach some more. He stopped coaching 27 years ago, and when Brock was 9, he got back into coaching as an assistant, about eight years ago.”

Since Herb began scouting with his scorebook and Chris has been coaching, and a generation of young baseball talent has rolled through, Chris has coached Brady in six consecutive state tournaments either as an assistant or a head coach, winning the state championship three of those six years.

Both Chris and Herb believe this team will do very well in South Carolina.

“I think their experience has paid dividends and will continue to do so,” said Chris. “These guys have been very successful since they were eight years old. They know the competition gets better every round, and I think all that helps. They are very coachable and well-mannered. The parents have done a great job of raising them. We’re looking for good things in South Carolina.