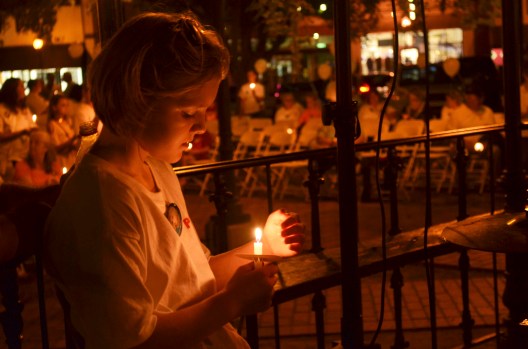 Over one hundred people came out to the Troy Square Friday night to light a candle and say a prayer for the family of Lelia Faulkner to find answers on where she might be. Faulkner disappeared on July 4, 2016, leaving behind two parents and a 9-year-old daughter (above) desperate to find her. 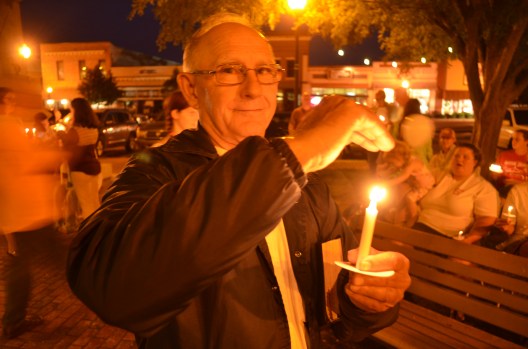 Candles lit up the Square in Troy Friday night as family, friends and other members of the community gathered to pray for Lelia Faulkner to be found.

Candlelight vigils have been a way to show support and solitude for a variety of causes, to mourn and to remember. Lighting a candle can also be a symbolic gesture to guide those who are lost back home.

Faulkner’s family doesn’t know whether she will ever come home. Faulkner disappeared on the Fourth of July a year ago and has left no indications as to where she went. She has not used her phone, her social media has been inactive and her money has gone untouched.

Her family remains hopeful that she’s alive, but more than anything, they want answers.

Curtis Faulkner, Lelia’s uncle and pastor of Harmony Baptist Church, led the vigil Friday night with a simple message to those gathered. “I believe we serve a God that can answer prayers,” he said. “I believe my Jesus knows exactly where Lelia is tonight and I believe He’s going to give us an answer.”

Curtis recounted the time Lelia had gotten lost before in the woods and the family called him to pray with him.

“When she was missing in the woods for two or three days, Ricky and Susan (Lelia’s parents) called me and asked if I could pray with them to find her,” Curti said. “Thirty minutes later I got a call back and they said ‘We found her.’ Some people that wouldn’t normally be there found her. They were there because Jesus brought them there.”

Curtis also shared two scriptures with those at the vigil. He first shared Galatians 6:2, which says “Bear each other’s burdens, and you will fulfill the law of Christ.” He also read Galatians 6:7 which reads “Be not deceived, God is not mocked; for whatsoever a man sows, that shall he also reap.”

Faulkner also used the opportunity to share his belief that Lelia was a believer in the gospel of Christ and to share it with those at the vigil.

“I believe with all my heart that Lelia got saved, Curtis said. Lelia had told me she was saved on several different occasions, but one night she came to church and was under conviction. She ran down the pew and told me, ‘Uncle Curtis, I need to be saved.’ For three or four months she was faithful, in church Sunday morning, Sunday night and Wednesday night and reading her Bible and asking questions, until one Sunday evening she was asked to ride off.”

Over one hundred people were gathered on the square for the vigil. In addition to prayer, there were also people singing gospel songs and worshipping.

Lelia’s case is under investigation by the Pike County Sheriff’s Office. Anybody with information that may lead to finding Lelia can contact the office at 334-566-4347. Tips can also be left anonymously with Halos Investigations at 803-599-4256.

The family has offered a $7,500 reward to anybody that can provide information that successfully leads to finding Lelia.