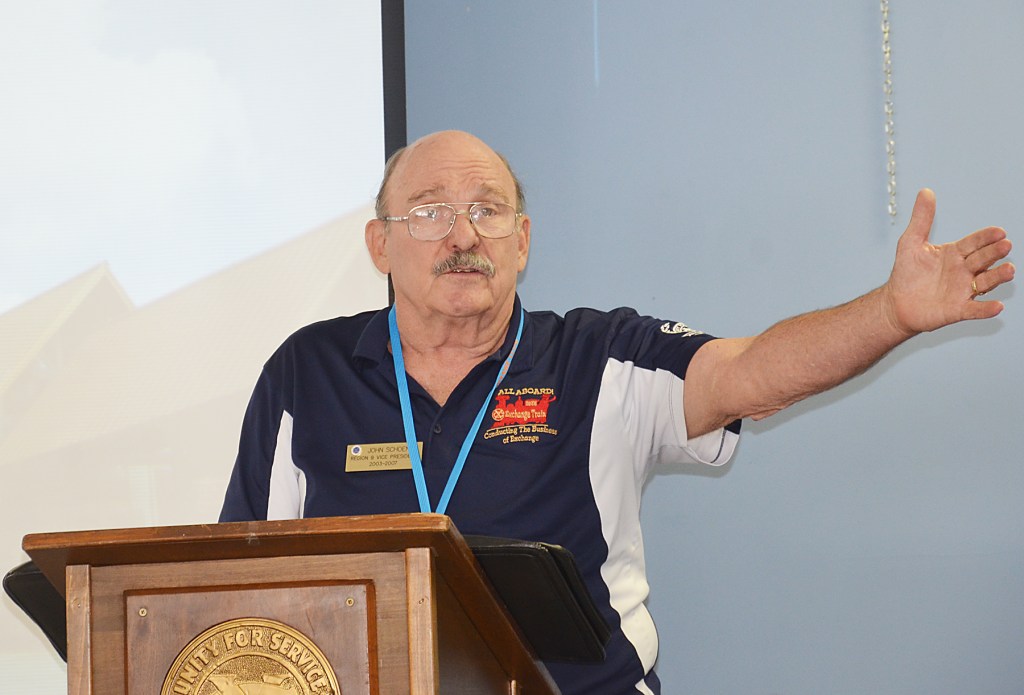 John Schoen, Alabama Exchange Club District treasurer and Regional volunteer field representative, was the featured speaker at the Thursday meeting of the Troy Exchange Club. Schoen is a member of the Irondale Exchange Club.

In what Schoen described as an “elevator speech, he summed up exactly what the Exchange Club is all about.

Schoen said people are buying into the ideals of the Exchange Club as evidenced by the growing membership in the National Exchange Club that includes people from across America and Puerto Rico.

“While many civic clubs and organizations are decreasing in number, Exchange Clubs’ numbers are increasing and that is very encouraging,” Schoen said, adding that high school and grade school clubs are contributing to the growth of the Exchange Clubs.

Schoen was very complimentary of the Troy Exchange Club and its commitment to community.

He was also complimentary of the club’s annual signature Vidalia onion fundraiser.

“My club tried selling onions once, but they got buggy,” he said, with a smile. “But your club has been very successful with your onion fundraise and you are to be congratulated.

“The Troy Exchange Club has long been a leader in the Troy community. Your club has been the beginnings of great things.”

Schoen cited the city park and the flag project, which had their beginnings in the Troy Exchange Club.

“This club has made and continues to make great contributions to the Troy community,” he said.

“The more people, the more ideas that are presented,” he said. “Whenever you have new members, always give them something to do. It keeps them involved. And, the person who has just joined is the best person for getting new membership. They past their interest and excitement on.”

To put an exclamation mark on Schoen’s remarks, the club inducted a new member, Greg Herring with Lockheed Martin.

Also on the program was the installation of the club officers for the new term of office, Jerry Beckett, president; Mark Garrett, secretary; Jay Shirley, treasurer and Brenda McCraney, board member.

Beckett expressed appreciation to Schoen and his wife, Linda, for their attendance and for their long and continuing support of and service to the Alabama Exchange Clubs.