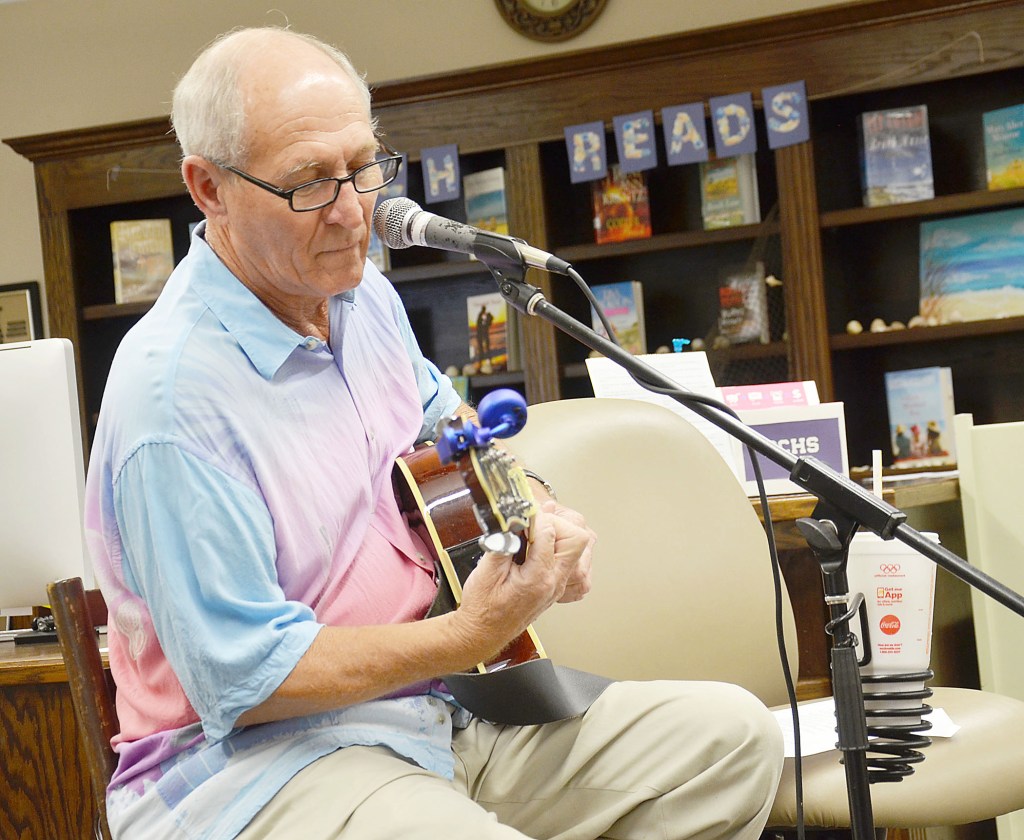 Lenny Trawick, award-winning blues singer from Pike County, was the guest speaker/performer at the Brown Bag Lunch event at the Tupper Lightfoot Memorial Library in Brundidge Tuesday. Trawick shared the history of the blues with his audience. The left-handed guitar player entertained with his favorite songs by his favorite blues artists.

B.B. King kept the torch lit when nobody was paying attention to the blues.

Trawick was the guest speaker/performer at the Brown Bag Lunch event Tuesday at the Tupper Lightfoot Memorial Library in Brundidge, his hometown.

He pulled up a stool, tapped the microphone and shared highlights of the history of the blues and sang the music that does his heart good.

For five decades, Trawick has been playing music. Much of the music goes back to his childhood. The first music he remembers is what was called church house songs. He also soaked up gospel, country, blues and rock music. He has played with blues, gospel, country and jazz bands and also performs as a solo artist.

And, it seems that today he is most comfortable, most “at home” as a solo blues artist.

Trawick took his Brown Bag audience on a trip down memory lane with blues singers whose names ring a bell with most southerners whether or not they are blues fans. Names, like B.B King, Hoagy Carmichael, Ray Charles, Jimmy Reed and Louis Armstrong. And, some unfamiliar names like Buddy Johnson and his sister Ella Johnson and Annie Laurie.  And, some names that raised a few eyebrows – Willie Nelson, Patsy Cline and Hank Williams.

“When Ray Charles recorded ‘Georgia on My Mind,’ some people said it was a country song,” Trawick said. “I disagree. It has all of the elements of a blues song.”

Trawick was asked if ‘Georgia” was the state or a woman.

“The words say ‘other arms reach out to me, other eyes smile tenderly,’ so I just wonder if it’s about a woman,” said Larry McLeod.

Trawick said he couldn’t answer that for sure but “Georgia on My Mind” is the state song of the Peach State.

“We categorize music too much,” he said. “Willie Nelson wrote ‘Crazy’ and Patsy Cline recorded it. Country? Blues?” The music that Hank Williams wrote and sang was called white men’s blues. Hank Williams learned from a street musician in Montgomery. So his music had an element of blues in it but it was called country.”

Chris Rich mentioned St. Paul and Broken Bones and Shakes. Only a few in attendance recognized the Alabama R&B bands but did identify with Little Jimmy Reed of Enterprise who is now singing the blues around the world.

“Little Jimmy Reed is popular in other countries but, not in many places around here,” Trawick said. “He plays at Troy Health and Rehab about once a month when he’s not traveling, but not many other places in this area.”

The blues has been a part of the Southern culture since the early 1800s and Trawick said there’s no indication that the blue is going away.