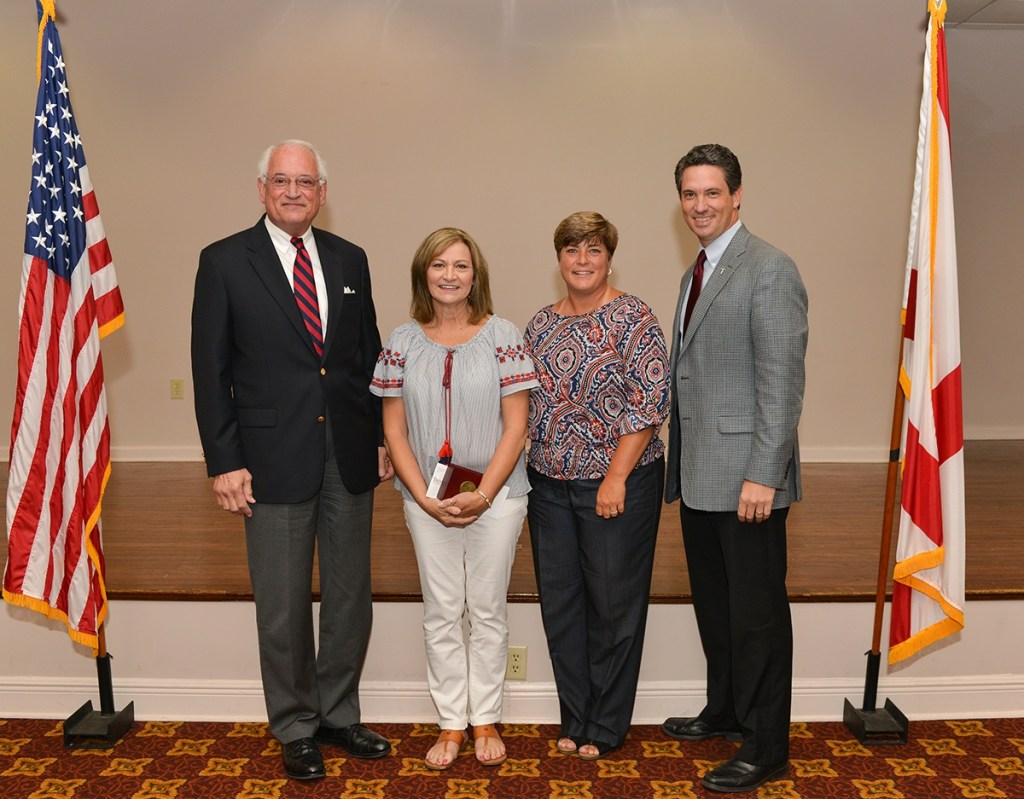 Helen Shirey, administrative secretary for Troy University Athletics, receives the University’s Vergil Parks McKinley Award from Dr. Jack Hawkins, Jr., Chancellor, during a ceremony on Wednesday at the Troy Campus. From left to right are: Dr. Hawkins; Shirey; Deputy Director of Athletics Sandy Atkins, who nominate Shirey for the award, and Director of Athletics Jeremy McClain. The McKinley Award is the highest honor that Troy University gives to a non-faculty staff member and consists of an engraved clock and a $1,000 stipend.

Shirey, who has been employed by the University since 1985, received the award from Dr. Jack Hawkins, Jr., Chancellor, during a ceremony on Wednesday in the Hawkins-Adams-Long Hall of Honor on the Troy Campus. She was nominated by Sandy Atkins, deputy director of athletics.

The McKinley Award is the highest honor that Troy University gives to a non-faculty staff member. It is presented quarterly to an employee who has demonstrated outstanding attitude, innovation and work ethic. The award was established by the late John McKinley, former Texaco CEO, in honor of his father, Vergil Parks McKinley, who was a Troy University professor during the early 20th century and was key to the development of the University’s athletic program. Winners of this award receive an engraved clock and a $1,000 stipend.

“Helen has not only earned my respect but the respect and admiration of peers through her accomplishments, attitude and efforts every day,” Atkins said. “In addition, she has a great personality and character which exudes her positive nature. Her positivity and upbeat approach is contagious and it sets the tone for our whole department. Helen’s influence encompasses staff members, coaches, graduate assistants and student-athletes. She is a reflection of the best qualities that all of Troy University has to offer.”

Shirey said she was honored to receive the McKinley Award.

“Receiving the McKinley award is an honor, and I am humbled to be included in the great group of recipients,” Shirey said. “There are so many things to love about working in the Athletic Department at TROY but, if I had to name one, it would be the people that I work with. They are some of the hardest working individuals around, and they are like family. We work hard and play to win.”