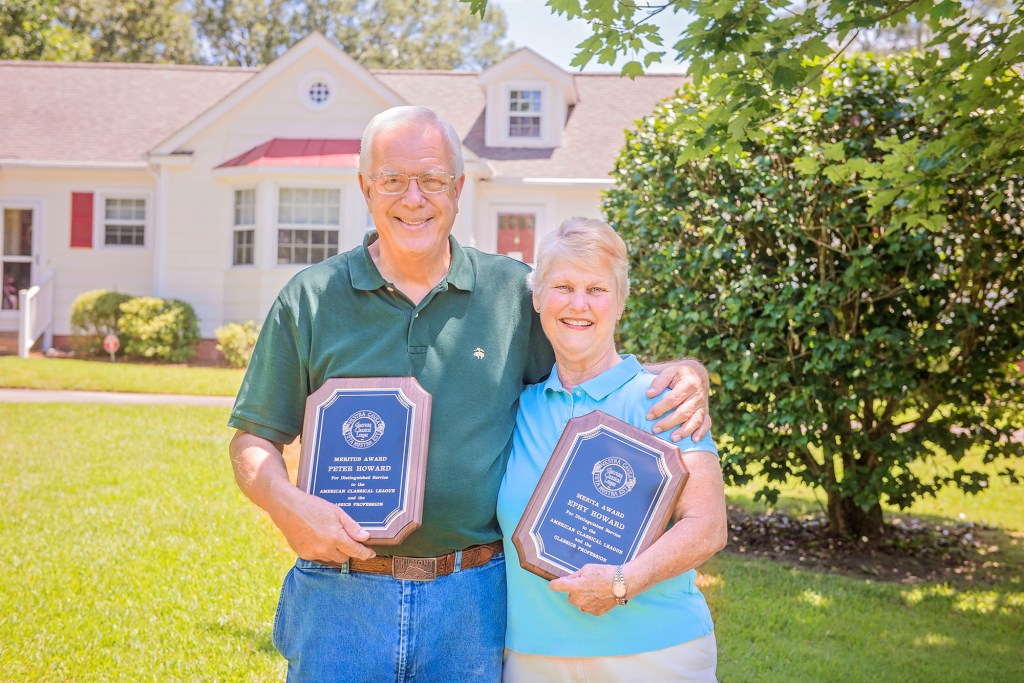 For the first time in its history, the American Classical League’s Meritus/Merita Awards were presented to a couple.

Peter and Sara “Ephy” Howard of Troy were honored as recipients of the Meritus/Merita Awards at the banquet at this year’s ACL Institute in Grand Rapids, Michigan in early July.

The Meritus/Merita Award is the ACL’s highest honor awarded for sustained and distinguished service to the profession and ACL.

The Howards said they were extremely honored and humbled to receive the Meritus/Merita Awards.  The awards honor only up to four recipients each year. Three recipients were so honored in 2017.

Peter Howard was notified that he was a recipient of the prestigious award by email. Ephy Howard’s notification came through the postal service. Each said to the other, “Look what I got.” And each Howard is happier for the other than for himself/herself. And had it not been for their love of Latin, the Howards might have never met.

Ephy Howard’s love of Latin was either inherited or greatly influence by her mother, who was a Latin teacher.  Peter Howard’s interest in Latin came about in high school as a result of his disgust in dissecting frogs and his efforts to avoid history.

Each excelled in Latin in high school and attended Florida State University on language fellowships.

“There were three of us, my roommate, Pete and me,” Ephy said adding that two of those fellowships developed into romance, hers and his.

They graduated FSU in 1967 with master’s degrees in Classical Languages and both have excelled throughout their teaching careers.

However, the ACL Meritus/Merita Awards are not the first time the Howards have shared honors. They were named the Young Man and Young Woman of Troy in 1983. Kay Ivey, who is now governor of the State of Alabama, presented the award.

Dr. Peter Howard is professor of classics and the chairman of the Department on Modern Languages and Classics at Troy University. A native of Brooklyn, New York, Howard has lived in Alabama since 1948.

After graduating with a Latin Diploma from Lee High School in Montgomery, Howard earned a bachelor’s degree in Latin and Music History from the University of Alabama and a master’s in Classics from Florida State and a Ph.D. in Foreign Language Education from FSU.

Howard is an honors graduate in German from the Defense Language Institute in Monterey, California. He also studied at Loyola University of Chicago’s Rome campus and at the Free University of Berlin. While stationed in West Berlin, he served for two years as a German translator/analyst with the U.S. Army Security Agency.

He has served as president and chairman of various Classical Language organizations and project director for two immersion institutes for teachers in French, Latin and Spanish.

Howard has been recognized as a distinguished alumnus by the Department of Classics at FSU.

He has served for many years as a Scoutmaster for the Boy Scouts of America. He plays French horn in the Southeast Alabama Community Band and has served as music director for barbershop choruses in Alabama and in Germany.

Ephy Howard holds a bachelor’s degree from Florida Presbyterian College and a master’s in Classics from FSU.

She was a teacher for the deaf and blind in Tallahassee, Florida and Salinas, California and was a tutor for the Alabama Children’s Home from 1974 until 1992. She worked with Head Start and the Charles Henderson Child Health Center as a deaf children specialist prior to teaching Latin at Charles Henderson High School from 1985 until 2010. She first taught Latin one period a day but student and parent interest was so positive that she began teaching fulltime. She traveled with CHHS students to Italy in 1988 and 1994.

Howard began as the ACCESS teacher in Latin in 2007 and continues in the position. She currently chairs the Scholarship Selection Committee for the National Latin Examination.  The Howards enjoy traveling and have visited all 50 states and 34 countries. They both enjoy Broadway productions. They share uncommon interests, she in jigsaw and crossword puzzles, and he in fly-fishing and Frisbee. T

he couple has two children, Eric, a political consultant, and Caroline, who holds an undergraduate degree in rehabilitation from Troy State University.

The Howards’ home in Troy is a wildlife sanctuary and home to an ash tree named Karl and a one-legged cardinal, IHOP.