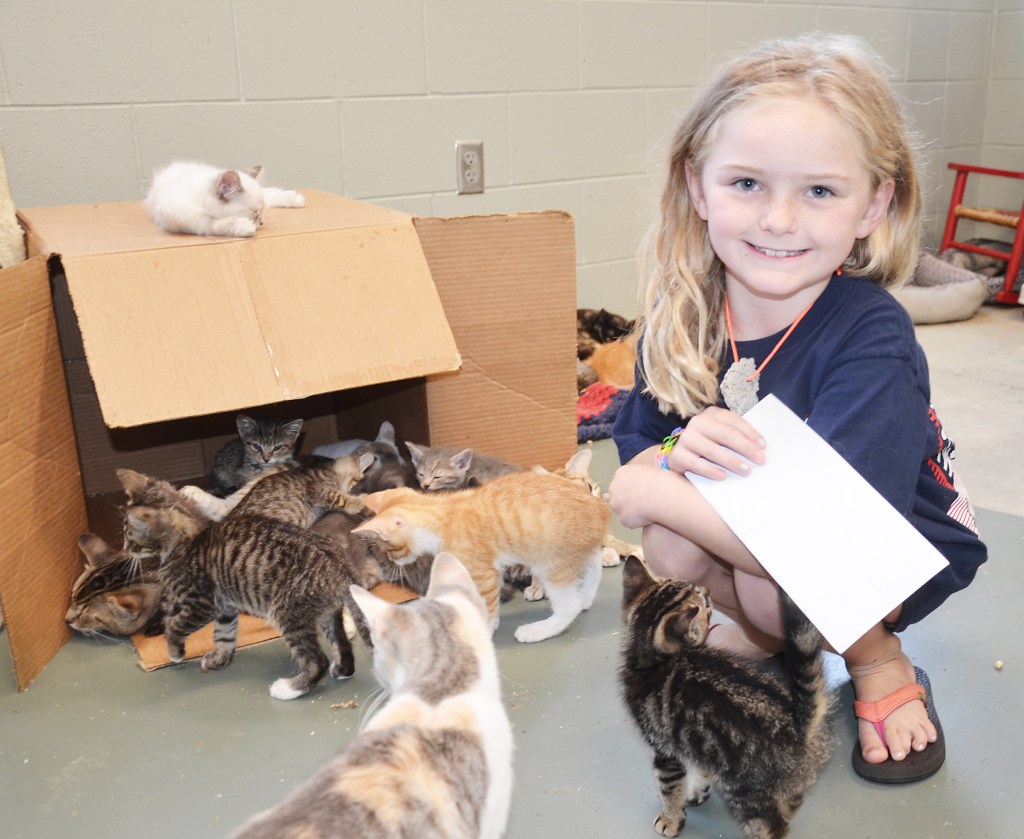 Anna Kate Leigner takes some time to play with the cats at the Pike Animal Shelter. Leigner raised over $200 for the shelter by selling goodies and jewelry at a booth outside of her home.

Philotherianism is a mighty big word. Seven-year-old Anna Kate Leigner has probably never heard the word. But, she understands its meaning.

Anna Kate Leigner loves animals, all kinds of animals, and her love is unconditional.

She and her family have two rescue dogs at their home in Alpharetta, Georgia. One of the dogs, they found, lonely and scared, at a gas station. The other came to them from a rescue shelter.

Having rescue dogs in her home and knowing the love they bring to her and her family has strengthened Anna Kate’s love for animals, especially homeless animals.

Anna Kate decided she wanted to do something more for homeless animals. So, last summer she set up a booth at her home with an attached sign that read, “For Homeless Pets” and began raising money for the homeless animals at the Best Friends Animal Society in Kanab, Utah, which her family has supported for several years.

For three days, Anna Kate, with the help of a friend, sold cookies to her friends in the neighborhood and to their moms and dads. All the money she collected, and match money from her parents, was sent to the non-profit animal society in Utah. “About $100.”

Because Anna Kate has such a heart for animals, she had not done enough. She wanted to do more for homeless animals.

This summer, once again, Anna Kate set up a booth with a “For Homeless Pets” sign on the lawn of her home. This time, she was raising money to help the homeless animals at the Pike Animal Shelter.

Not only did she have goodies to sell, she also made jewelry. While she waited for customers, she would make bracelets and necklaces by stringing beads and shells that she had washed ashore at Amelia Island.  And, customers came.

When Anna Kate closed her booth, she had raised $118.32 for the Pike Animal Shelter. Her parents, once again, matched that amount.

On Thursday, Anna Kate presented a check for $236.64 to Jacqueline Meeks, Pike Animal Shelter director, for the homeless animals at the shelter.

Anna Kate expressed hope that the kittens and puppies and cats and dogs at the shelter will soon find homes where someone loves them.