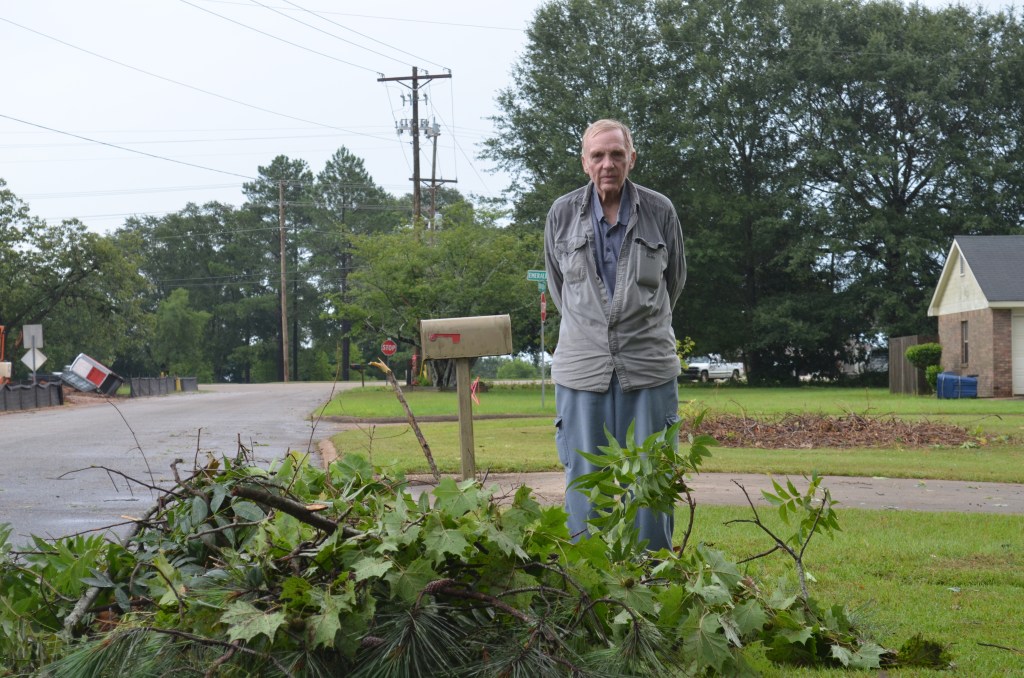 Ray Gene Stinson stands next to a pile of limbs that were knocked down around his home after a pop-up storm hit the area Friday afternoon. The storm also snapped a tree and caused other damage at the Troy Country Club.

It wasn’t a tornado– it wasn’t even quite registered as a thunderstorm– but whatever it was, Ray Gene Stinson said it was scary.

“Around 3:15 (p.m.) it just became a lightning storm,” Stinson said. “It scared me. I’ve always been scared of lightning.”

About an hour after the storm stopped, Stinson was out in the front yard of his home on Country Club Road picking up the debris.

Around the neighborhood, the majority of the debris consisted of small tree limbs and branches, but judging by the size of Stinson’s pile, there was plenty of it.

More than tree limbs were thrown down by the high winds too; a portable toilet was knocked down at a nearby construction site, a basketball goal lay flat in a driveway and one home’s entire fence was blown down.

Pike EMA director Jeanna Barnes said the storm certainly caused some debris in the area– her own home nearby was affected with limbs littering the back yard– but no major damage was reported to her.

“This was just a summer thunderstorm,” Barnes said. “It didn’t even reach a severe thunderstorm warning classification.”

Although it never qualified as severe, Barnes said it did cause some hail in the area, but it was pea-sized and left little to no damage behind.

“I would say any hall can be dangerous, but it’s not going to do damage like ping-pong ball or golf-ball sized hail,” Barnes said.