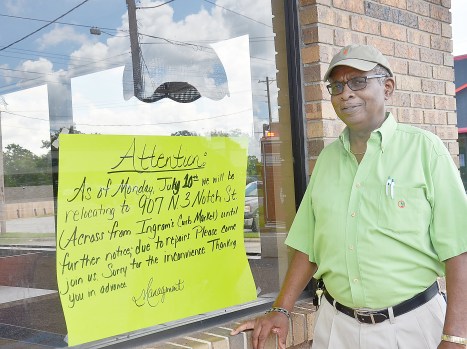 Fire trucks rushed to Crowe’s restaurant Thursday morning in response to a fire at the popular eatery. Owner Robert Jones, above, expressed his appreciation to the firefighters for the quick response and getting the fire under control, which Fire Marshall Brandy Cox said appeared to be an electrical fire. The ign next to Jones explains to customers that the restaurant will be relocating to 907 N. 3 Notch Street on July 10 due to repairs unrelated to the fire. 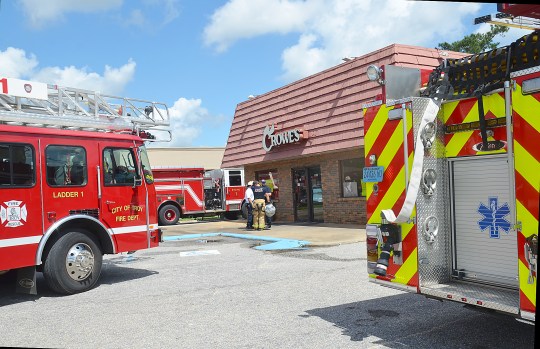 Bright red fire trucks at Crowe’s restaurant in Troy on Thursday caused concern among those who are hooked on Crowe’s chicken. Vehicles on U.S. Highway 231 slowed to a crawl and there was a lot of rubber necking taking place.

“Did Crowe’s burn?” a motorist yelled and a bystander responded that the fire wasn’t “too bad.”

Troy Fire Department Battalion Chief Curtiss Shaver said the fire call came in at 9:53 a.m. Thursday and Engine 3 responded at 9:56 a.m. Using thermal cameras, the fire fighters were able to locate the source of the fire rather quickly. There was structural damage near the office, but the building was saved, he said.

Several employees were in the restaurant at the time of the fire but were outside when the firefighters arrived.

Troy Fire Marshall Brandy Cox said the fire appeared to be electrical but as of Thursday afternoon, the fire was still under investigation.

Robert Jones, owner of the iconic restaurant that specializes in fried chicken served with a secret recipe dipping sauce, expressed his appreciation to the Troy firefighters for their quick response and their expertise in getting the fire under control and extinguished.

Then, he responded to questions about the big yellow sign in the window.

Jones said, yes, as of Monday, July 10, Crowe’s will be relocating to 907 North 3 Notch Street across from Ingram’s Curb Market.

“Due to repairs, not associated with the fire, we are relocating,” Jones said. “The North 3 Notch restaurant will be a permanent location for Crowe’s.”

The building that houses Crowe’s restaurant and the property on U.S. 231 are owned by Sherrill Crowe, so the future of Crowe’s on the highway is uncertain at this time, Jones said.

Jones said being located on the busy thoroughfare has been good for business as chicken lovers are up and down the highway day and night.

“We’d lose the potential for a lot of customers if we didn’t have a location on the highway,” he said.

However, Jones said he is optimistic about the move to North 3 Notch.

“I’ve talked with our customers and they say they’ll keep coming,” he said. “We can seat about 28 people at our present location and around 64 on Three Notch. I’m excited about the bigger dining room and what it will mean to our customers.”

And, the chicken and the dipping sauce will be the same at North 3 Notch as it has been at the U.S. 231 location. Jones will just have to find a way to detour highway traffic to North 3 Notch.