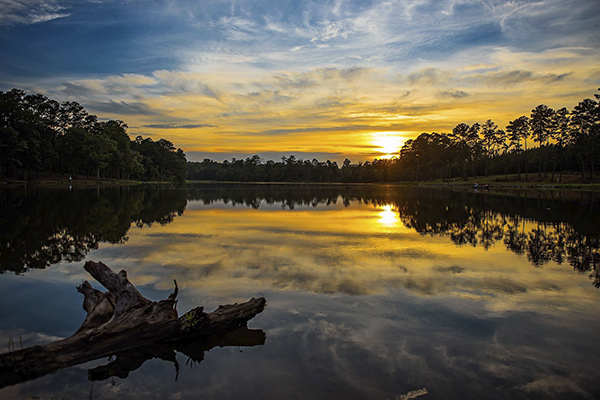 After closing for five years, Pike County Lake was reopened last June and is thriving, according to Dan Smith, director of the Troy Recreation Department. The lake has brought in nearly 8,000 visitors and generated a revenue of over $70,000. It has also played host to several events such as fishing days for students at Charles Henderson Middle School.

“We didn’t know what to expect when we opened it up last year, we just knew it was really beautiful,” Pettus said. “ Looking back at the last year, it’s been great. I can’t even tell you how many people came out and fished.”

Dan Smith, director of Troy Parks and Recreation, did have the numbers though: a total of 7,692 guests have visited the lake since it re-opened on June 1, 2016, not including July 3-5.

Those guests have brought in a total of $71,710 in revenue, Smith said, not including reservations of the conference center. Smith said reservations have generated about $2,500 more in revenue.

Smith said the revenue doesn’t reflect the number of people ages 65 and over or 11 and under, who get to fish for free. Smith said about 550 seniors above the age of 65 and 264 under 12 have visited the lake over the year.

Pike County Lake originally opened in 1951, but had to close for repairs in 2012 as the dam and property had deteriorated over time.

The City of Troy and the Alabama Division of Wildlife and Freshwater Fisheries began a partnership in 2013 to renovate the lake, draining it, repairing the dam and shoreline, constructing the conference center and concessions area and restocking the lake with bass and bream.

“This project is totally a result of the effort of Mayor Jason Reeves and representatives of the Alabama Department of Wildlife and Fisheries who wanted to revive and renovate Pike County Lake,” Smith said. “They made great efforts in cleaning up: they drained the lake, re-poured the dam and built a state-of-the-art concessions and conference center,”

Reeves said that cooperation between multiple agencies was likely the biggest accomplishment.

“I think one of the things I’m especially proud of is the fact that the different agencies with state and local government were able to come together and work together and save a valuable resource by working in a partnership together,” Reeves said. “It’s just something that will build over time.”

Smith said the result of the city and state’s years of work on the project is a huge improvement over years past.

“It is a beautiful facility,” Smith said. “Many people that may remember it from 10 and 20 years ago, it’s nothing like it was back then. It’s very clean, very nice and a lot of people are using it.”

Pettus said the weather has been one of the biggest factors in determining usage.

“We have noticed that weather plays a lot into how many people come out,” Pettus said. “We had record numbers in March, April and May.”

When temps got hotter in June and July, the numbers dropped off. Pettus expects usage to increase in the fall. “We even had people fishing in winter because we didn’t have a cold winter,” Pettus said.

Reeves said he’s looking forward to the years ahead for what the lake will offer.

The lake consists of 45 acres of water owned by the State and managed by the City of Troy. The lake is open from sunrise to sundown. Specific hours can be requested at 334-674-2480.

The lake is open six days a week year-round. It is closed on Wednesdays and some holidays. In addition to a $3.75 fishing permit, residents ages 16-64 need to have a valid fishing license. Both permits and licenses are available at the concession stand and bait shop.

Fishers are allowed to catch up to five bass 14 inches or less and up to 20 bream.