The grass is always greener for Troy man’s family 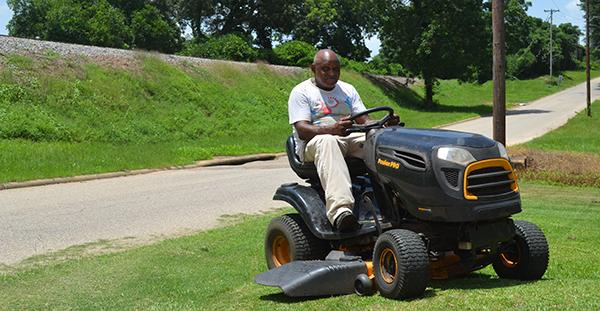 Grady Richards was out mowing his relative’s lawn Monday when the Dart fell in his area on Hanchey Street. Richards said he enjoys yard work and helping somebody else.

When the Dart landed on Hanchey Street this week, Grady Richards was doing what he’s done about every two weeks for the past few years: mowing the lawn for a family member.

“This is actually my in-law’s house,” Richards said. “She’s elderly and on a fixed income, so I try to come out about every two weeks and cut her grass for her for free.”

“I decided when she grew up and moved out I was going to keep mowing her lawn for her,” Richards said.

Richards still holds a job at Pinckard Vault and Marble, where he has worked for the last 33 years, but finds time on his off days every two weeks to make sure the lawn gets mowed.

“I really needed to get out here today,” Richards said. “I usually cut it on Saturday or Sunday but the rain puts you behind.”

Mowing the lawn isn’t a burden, Richards said, because he loves doing yard work. “I like it because I can see the results right away,” Richards said. “And it only takes about an hour to mow her yard for her.”

Richards said he makes sure to mow his own yard at least once a week. “I keep it looking good,” Richards said.

Today, Richards is holding a barbecue at his house for the Fourth of July holiday, and family, friends and neighbors can be sure that his yard will be in top shape for the get-together.

Editor’s note: “The Dart” is a Messenger feature highlighting everyday people around Pike County. Each week, a Messenger reporter will be throwing a dart at a map of Pike County and feature a story on someone out and about in the area where the Dart lands.